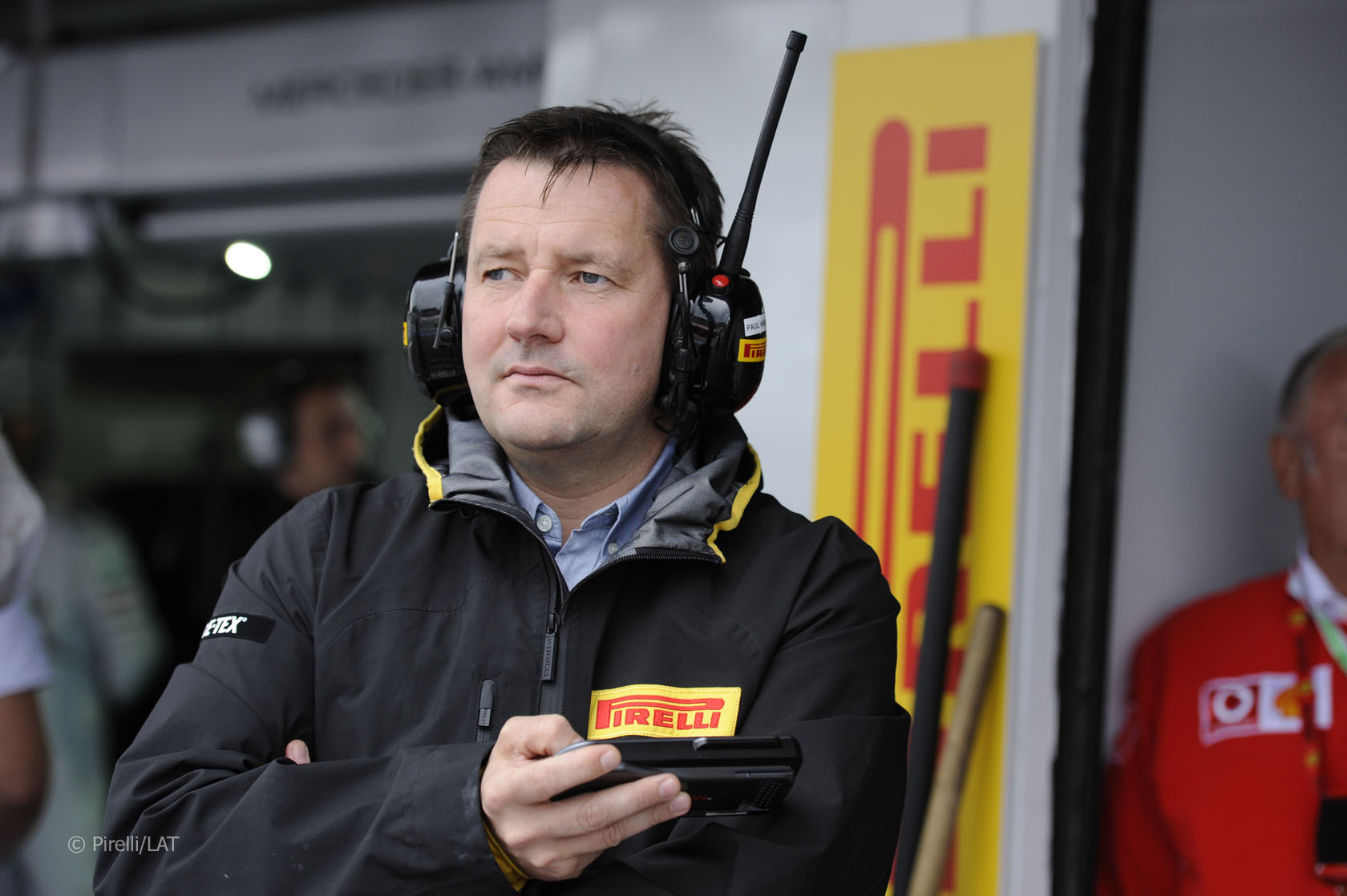 Pirelli motorsport director Paul Hembery says he does not expect to see a return to competition between tyre suppliers in Formula One.

Hembery told F1 Fanatic “there’s no appetite” for a new tyre war, which was last seen in F1 seven years ago.

“You can see around the world in terms of circuit racing there’s probably three or four championships in the whole world that are open now,” said Hembery. “That’s the way the world prefers it and I can understand why.”

Hembery said that there wasn’t enough value in winning in a tyre competition because the credit invariably goes to the driver and team – with the tyre manufacturer getting the blame if something goes wrong.

“What you’ll find in motorsport is that even when you’re winning as a tyre maker unfortunately – well, it’s correct – it’s the driver and the car that’s winning. If you lose, as the tyre maker it’s always your fault,” said Hembery. “It’s a strange paradox.”

“You can’t actually convey to the public when you’re a winning tyre maker because it’s not a tyre championship, it’s a drivers and vehicle championship. If tyres ever became so dominant or one tyre maker became dominant it would still become a single brand because everybody would move to that brand. So you’re really delaying the inevitable, almost.”

No value in “finding half a second per lap” Hembery added that had been the case in other series where Pirelli has competed against rival tyre makes. “I enjoyed winning the World Rally Championship in 2001 and 2003.

“So we’ve had examples where we’ve clearly been the major part of the championship but it’s impossible to convey. It’s one of those strange situations.

“Unless you maybe go and have a tyre championship so you have one car and then just swap the tyres around but I don’t think there’s much appetite from the public for doing that!

“It would be interesting to have tyre competition because it’s stimulating from various points of view. If you’re looking at it from a business point of view spending tens of millions to make yourself go half a second quicker really is money badly spent.”

Hembery said the sport’s resources were best spent in areas other then improvements in performance that may be imperceptible to the general public:

“To us, if the rules change and there’s going to be tyre competition it’s obviously something we’d evaluate and look at, I’m not excluding that.

“But if I’m looking at it from a commercial and business point of view it’s far better investing money in promoting the sport and promoting involvement in the sport than it is trying to find half a second per lap which the public can’t judge anyway. If you’re sat watching a car that’s half a second quicker or slower going around you won’t be able to understand.”

He added that teams don’t want to have to spend more on tyres. “They make a contribution,” to Pirelli’s costs, he explained, adding: “They have been heavily, heavily, heavily discounted!”

Teams have “only given compliments” so far Pirelli’s contract as F1’s official tyre supplier is up for renewal this year. “Three years is not enough,” said Hembery when asked if Pirelli wants to continue in F1.

He said Pirelli were interested in remaining in F1 at least in the “medium term”.

“Over ten years there’s maybe less value added each year that you continue because the public perceives that you are in Formula One,” he explained.

“When we were in Formula One last in the nineties it took four or five years before people realised we weren’t in it any more. So you have to create momentum – once you’ve got it, it carries on many years after you leave the sport.”

Hembery added: “Any competitor will know very clearly we have a three-year deal so they will have had ample opportunity to raise their hands if they’re interested. Our point of view is that we’ll have to speak to the promoter because a major part of our investment return comes from trackside visibility of our brand. So we’ll have to make sure we have an agreement with the promoter.

“And then you have to find an agreement with all the 11 teams. At the moment we’ve only ever had compliments and positive feedback from the teams and the promoter is very keen for us to continue.” Hembery said Pirelli will continue to challenge teams with their tyre selections in 2013:

“There’s a balance. At the start of the year – we did it in ’11 and ’12 – we create something different, we create a technical challenge and that may create sometimes a result where one team is able to get a better performance out of their package with their tyres than another.

“It’s a 19 or 20-race season. With the best engineers and drivers in the world at a certain point they will master the situation and you’ll find we’re only talking about drivers and cars which is what we had in the last two seasons. And that’s a very nice balance because it is a long season so if we can create a bit of interest and diversity at the start as the season progresses we’re correctly talking about drivers and cars which is a good balance and gives us an opportunity to be part of the racing weekend discussion point for positive reasons.

“Because the other problem with tyres is they’re only talked about them when they blow up and that isn’t a good way to be spoken about, only when you have an issue. So the balance would appear to be about right at the moment.”

Hembery agreed that by the end of the year the team’s knowledge of the tyres plus slightly more conservative selections on Pirelli’s part borne of a desire not to interfere with the championship produced some processional races.

“We probably were a bit conservative in the last two seasons and we will change that certainly for this year,” he said. “But always within the realms of creating that sporting spectacle.

“I think the reality though is the teams are so good that whatever we threw at them by the end of the season they will pretty well have dominated it.

“It’s strange that for all the talk of drivers complaining the reality if you talk to the technical directors they just want to know they have exactly the same challenge as the next team and they look at it as another opportunity to dominate. And if they dominate it before their competitor they’ll have an advantage.

“If you talk to drivers, of course, you have to put some perspective because in motorsport whatever they’re talking about there’s only only one happy driver, that’s the person who actually won the race. That is the rule of motorsport.”

Hembery said teams are going to greater lengths to solve the challenges presented by their tyres:

“The one thing that was quite clear last year which was visible was that they were having thermo-cameras on the rear tyres. It started with a few cars then suddenly everybody had them. So that’s one example of them understanding temperature management.

“So that gives you an example of how the teams work. They are far more elaborate than that, unfortunately I can’t give you any more detail because it’s team-specific and it’s not our position to be telling people about that.

“But I guarantee you there’s a lot of detail work that goes on within the teams and it’s very impressive the engineering ability and capacity the teams have.”