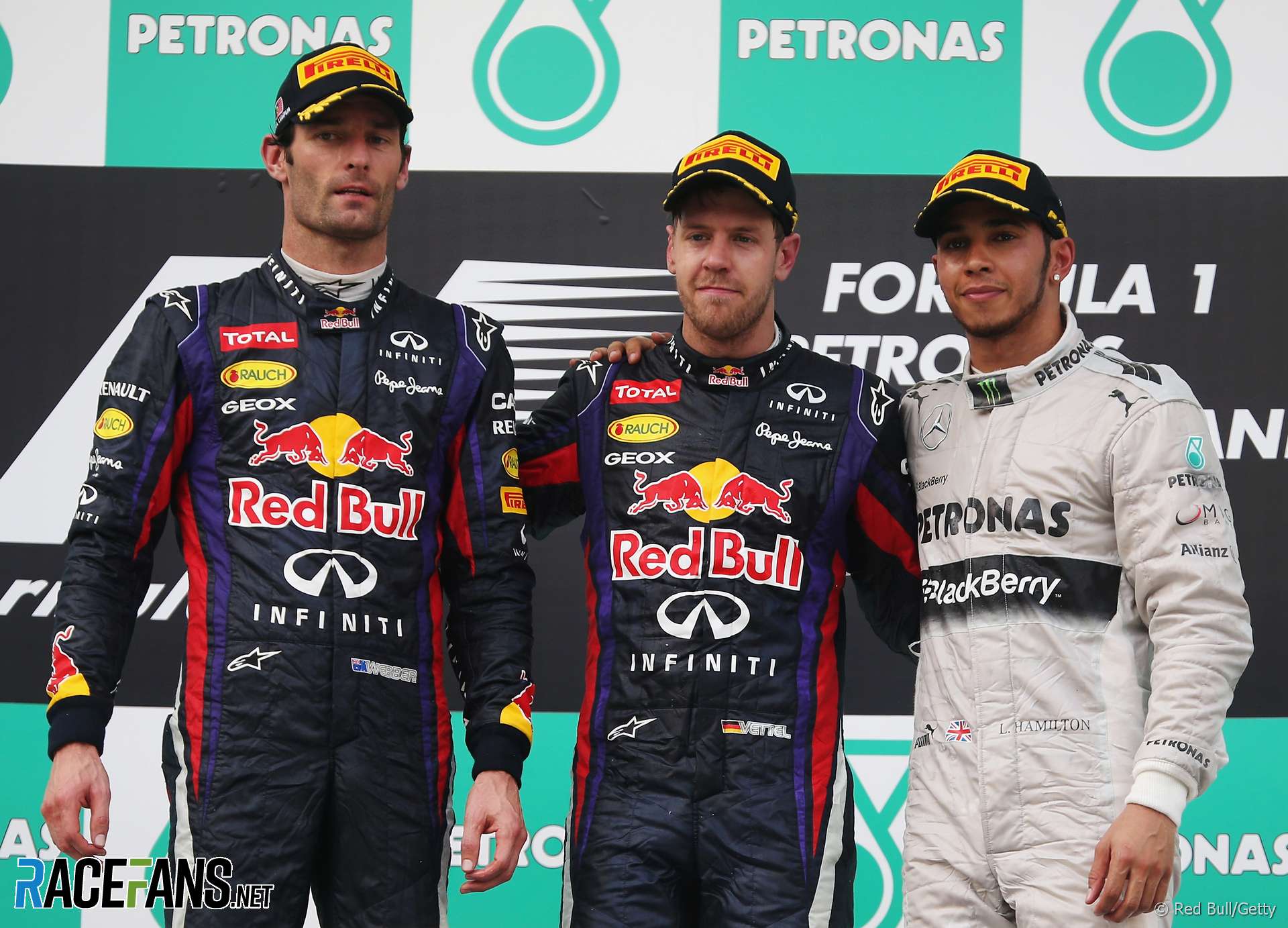 The two Red Bull RB9s, identical except for the two men holding the steering wheels, danced around the sinuous curves of the Sepang International Circuit as if they were choreographed.

But Sebastian Vettel’s audacious bid for the lead on lap 46 of the Malaysian Grand Prix was anything but stage-managed. On the Red Bull pitwall lips were bitten, heads in hands, breaths held.

Between Mark Webber and the pitwall there had been a space a few centimetres wider than an RB9. Vettel did not hesitate to seize it – and claim the inside line for the next corner.

He walked Webber to the outside of the corner but stopped short of shoving him off – this was his team mate, after all – allowing Webber to reclaim the inside line for the next corner, and the lead.

Approaching turn four Webber had Vettel on his outside and they swung into the corner together. This time it was Webber’s turn to stay his hand, declining to give Vettel the push onto the kerbs any other driver would surely have received.

That proved decisive. Vettel was on his way to victory number 27. Webber raised his middle finger at his disappearing team mate, and Red Bull’s troubles were just beginning. When Vettel took his place at the front of the grid an hour and a half earlier the two Ferraris directly behind him seemed a more pressing threat than Webber. On top of that, a late rain shower had doused the circuit, leading everyone to start on intermediate tyres.

But within minutes of the start Fernando Alonso removed himself from contention with two very un-Alonso-like mistakes. Caught out by Vettel’s caution in the second corner, the Ferrari driver nudged the back of the Red Bull, damaging his front wing which now hung from the nose of his F138 by a single pylon.

With the track drying quickly he and Ferrari gambled on staying out until they could make a pit stop for slicks while replacing the damaged wing. But he never got that far. Webber – who had made an atypically excellent start from fifth – was slipstreaming past him on the pit straight when the second pylon gave way. The wing folded under Alonso’s front wheels and he skated helplessly into a gravel trap.

Alonso had battled valiantly to keep Webber behind him on the first lap but it served only to hand Vettel a useful three-and-a-half second lead as they began lap two. However Vettel’s hasty switch to slick tyres a few laps later squandered that advantage.

Vettel’s stop on lap six was timed well enough for him to emerge from the pits ahead of Sergio Perez, Adrian Sutil and Romain Grosjean. But the first sector was where the track was wettest, and Vettel slipped behind all three. In the dry middle sector he quickly re-passed Grosjean and Sutil, but the damage was done.

On the next lap Vettel set the fastest middle sector time and that was Webber’s cue. He appeared in the pits, selected the hard tyres in contrast to his team mate’s mediums, and had Vettel in his mirrors after he returned to the track.

Nico Rosberg briefly held the lead before pitting, and resumed in fourth behind his team mate and the Red Bulls. Behind them Jenson Button and Nico Hulkenberg were demonstrating their usual flair for damp conditions.

In seventh place was Felipe Massa, who started second but was held up by his team mate’s wounded car in the opening corners. He then lost more time by pitting for slicks on the same lap as Vettel.

Perez was eighth but came under pressure from the two Lotuses. First Grosjean, then Kimi Raikkonen picked off the McLaren, the latter having fallen behind his team mate when he went off at turn 12.

“Mark is too slow”

Having run the opening phase of the race on wet weather tyres the drivers now essentially faced a truncated Malaysian Grand Prix in dry conditions.

But severe tyre degradation remained a major factor, especially for the Red Bulls. “Sebastian also looking after his tyres,” Simon Rennie told Webber shortly after his first pit stop. “We need to look after our tyres as well.”

Webber spent five laps less on the hard tyres than Vettel could manage on the mediums. After their second pit stops Vettel quickly arrived on Webber’s tail, hotly pursued by Hamilton.

“Mark is too slow, get him out of the way, he’s too slow,” Vettel urged on the radio. But Red Bull were not issuing orders – for now. “Be patient, only half race yet,” replied engineer Guillaume Rocquelin.

Mercedes spied an opportunity and brought Hamilton in for his third stop on lap 31. Red Bull had to respond and leader Webber had to be protected first. He and Vettel pitted on consecutive laps and while Webber retained the lead Vettel slipped to third behind Hamilton.

But Vettel’s irritation at this development proved short-lived. Hamilton had switched to the hard tyres and found them not to his liking, losing up to a second per lap to Webber. He was also short of fuel – Mercedes had begun telling him to “lift and coast” before lap 20.

On lap 39 Vettel pressed his DRS button and restored himself to second place. The stage was set for a dramatic and controversial conclusion. Despite making his second pit stop before the four-stopping Vettel, Button was aiming to get through the race with just three visits to the pit lane. But the third of those did not go to plan – the front-right wheel was not secured properly and Button had to stop in the pit lane and be pushed back to his box before having replacement tyres fitted.

McLaren later retired his car due to the amount of wear on his front-left tyre. Perez suffered a similar problem and had to make a late pit stop for a fourth set of tyres, suggesting a three-stopper was beyond the MP4-28 on this day.

It was possible for the Lotus pair, but unlike in Australia it was not enough to keep Ferrari behind. Massa easily caught and re-passed both drivers after his last stop, while Raikkonen went off at turn 12 for a second time.

Raikkonen had spent several laps trying to find a way around Hulkenberg. He emerged from the pits right on the tail of the Sauber on lap 35 and soon after complained about his rival’s defensive driving: “Did you see what he’s been doing? He pushes me off and now he hits me.” He eventually found a way around the Sauber, who in turn demoted the hobbling Perez later in the race for eighth.

War breaks out at Red Bull

On lap 43 Vettel dived for the pits. His in- and out-laps were blistering: despite a pit stop that was just a hundredth of a second faster than Webber’s he went from being four seconds behind his team mate to attacking him on the outside of turn one as Webber emerged from the pits.

Webber went fully defensive, repeatedly forcing Vettel to the outside and doggedly protecting his lead. Vettel received a message warning him to be “careful” – Red Bull instruct their drivers not to race each other for position after the final pit stop. Instead of Rocquelin it was Christian Horner who reminded Vettel of that on the radio: “This is silly, Seb, come on.”

Vettel wasn’t listening. Perhaps, as Horner suggested afterwards, he was thinking of how Webber could have been more co-operative when there was a world championship on the line at Interlagos last year. “Unfortunately the history goes back to Brazil and beyond that,” said Horner. “These guys race each other hard.”

Or perhaps he’d cast his mind back to Silverstone the year before, when Webber had been given a similar order to hold position and paid no heed to it. Now Vettel returned the favour, but where Webber had been unsuccessful in his attempt to pass Vettel on that occasion, it was not the case this time. Two laps later, Webber was waving goodbye to his team mate with one raised finger.

Ten seconds behind them much the same situation was being played out at Mercedes. Both drivers had been told to save fuel but Hamilton’s instructions were more frequent and more urgent.

Fortunately for Hamilton, his team mate plays by the Marquess of Queensberry Rules. Rosberg confined his attempts to pass him to repeated entreaties to Ross Brawn on the radio. A firm “negative” was the response.

“He can go a lot faster as well,” said Brawn, referring to Hamilton and seemingly contradicting the need to save fuel. Hamilton said afterwards he was “fuel saving for a long, long time” and was “unable to keep the pace of the guys in front”.

“So let’s go get the Red Bulls,” urged Rosberg, to no avail. “Understood,” replied Brawn, “but hold position.”

No smiles on the podium As Vettel crossed the line to clinch victory Webber roared up behind him and chopped across his team mate’s bows.

There were three glum faces on the podium. Vettel deflected questions about what had happened. Webber had challenged him about the team’s ‘multi 21’ code before they took to the rostrum. Hamilton said Rosberg should have been in his place and looked like he meant every word.

Vettel’s win propelled him into the lead of the drivers’ championship but it may carry a price for his team. Afterwards his team spoke ominously of having “a lot of thoughts going through my mind in the last 15 laps”.

For Webber, this may have been the last straw.