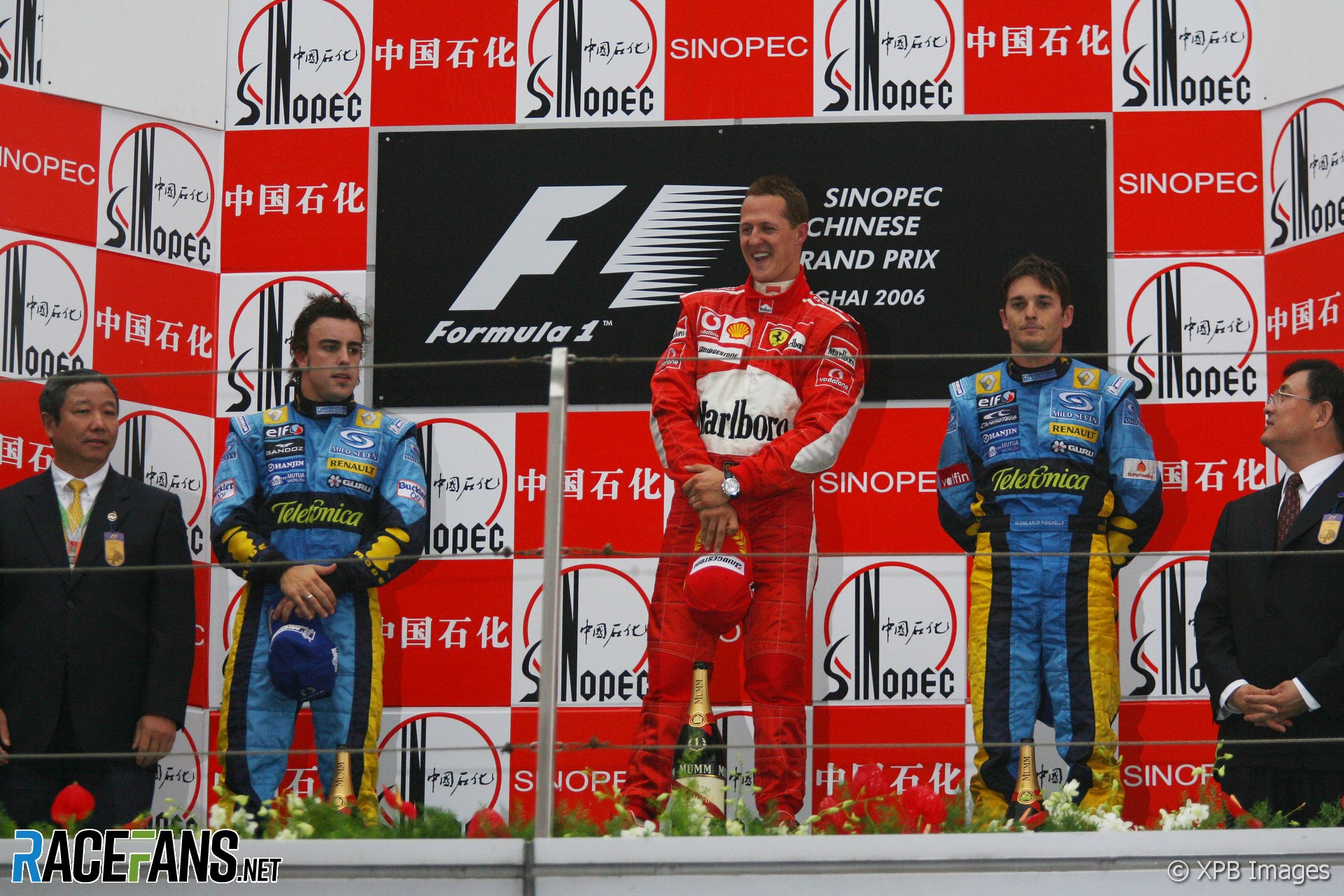 Fernando Alonso and Sebastian Vettel’s wins this year have raised them higher up among the most successful F1 drivers of all time.

Alonso is now tied with Nigel Mansell as the four most-successful driver ever in terms of race wins. At the last round Vettel surpassed Jackie Stewart’s tally of 27 race wins, which stood as the record for 14 years.

But even if you took Alonso and Vettel’s win totals and threw in Lewis Hamilton’s for good measure, you’d still be well short of the ultimate record.

Michael Schumacher’s 91 race wins is 60 more than the next best driver currently racing in F1.

Giuseppe Farina won the first ever world championship race but Juan Manuel Fangio and Alberto Ascari quickly outstripped his wins tally. The latter lost his life in 1955, leaving Fangio to set the benchmark at 24 wins when he retired from racing in 1958. Two of those were shared victories with other drivers.

Armed with the Lotus 49, Jim Clark would probably moved the tally further than he did had he not been killed in 1968. Fellow Scotsman Jackie Stewart picked up the baton and his 27 wins stood as the record from 1973 to 1987.

Niki Lauda came closest to Stewart’s record in the meantime, winning 25 times. But it was his former McLaren team mate Alain Prost who finally beat it.

Prost already had 17 victories to his name when Ayrton Senna became a winner in 1985. Senna never surpassed the wins tally of his great rival. He came closest following his victory in the 1993 European Grand Prix at Donington Park, with 38 wins to Prost’s 45, but by the end of his final season Prost had raised the bar to 51. Three races later Senna lost his life at Imola.

In the absence of Prost and Senna plus Nelson Piquet and, later, Nigel Mansell, the way was clear for Michael Schumacher to begin his assault on the record books. The combination of his supreme talent and an often dominant Ferrari allowed him to push the record to extraordinary new heights.

Will Schumacher ever be caught?

Just as impressive as Schumacher’s total number of wins is the high rate of wins he enjoyed across 19 seasons of Formula One. Despite a winless three-year comeback with Mercedes he departed the sport having won almost 30% of all the races he started.

That’s more than Vettel and any of the other drivers enjoy at the moment. For Vettel to reach Schumacher’s tally at his current rate he would need to start a further 237 races which would probably take until 2027.

It’s not inconceivable the 25-year-old Vettel will carry on racing into his 21st season. But it’s doubtful Alonso, 31, will hang around until 2032 to amass the 591 starts he requires to match Schumacher’s win tally at his current rate.

It’s a statistical oddity that the driver who enjoys the highest win rate for world championship races is Lee Wallard, winner of the 1951 Indianapolis 500. The race countes towards the championship that year and it, along with the previous year’s race, were the only two championship events Wallard started.

Among regular grand prix drivers Fangio has the highest win rate. But Schumacher’s is especially impressive given it spanned a career of over 300 races.

Here are the top ten race winners in terms of total wins and their winning rate:

The increasing number of races on the F1 calendar and improvements in driver safety go a long way towards explaining why the record for most wins has continued to grow.

But can it go much further? Will we ever see a driver hit 100 wins? And will someone on the grid today be the person to do it?