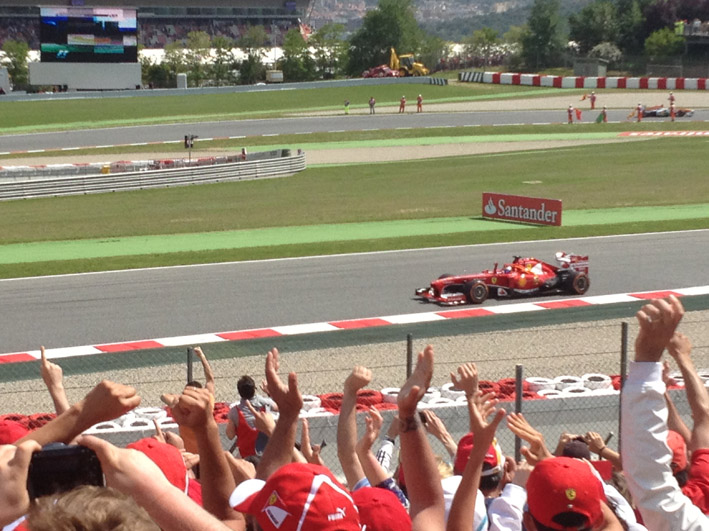 The Spanish Grand Prix received the lowest rating of the year from F1 Fanatic readers. But Madi Murphy was watching the race in the stands and found it hugely enjoyable.

‘Not one that had appealed to me’

The Spanish Grand Prix isn’t one that has ever hugely appealed to me, but after two of my friends went last year and raved about it, I decided to give it a chance. I?ů‘ťľ‘šůd been to F1 races before but this was my first time at the Circuit de Catalunya.

One of the best things about going to this race is its proximity to such a great city. We booked our trip last autumn, taking advantage of the ‘early bird’ discount for the race tickets along with inexpensive deals on flights and an apartment in the El Born district of Barcelona.

This was an ideal place to stay: we could walk to many of the city?ů‘ťľ‘šůs attractions and were close to the Passeig de Gracia train station. That allowed us to take a train to Montmelo and take a leisurely one-hour walk to the circuit, stopping along the way to buy coffee and croissants.

The circuits has some great general admission viewing areas and it?ů‘ťľ‘šůs easy to walk around to get different views of the track. For most of the weekend, however, we were happy to remain in our seats. We were in grandstand G, close to turns 12 and 13, from where we could see from the entrance to turn 10 to the DRS detection line before the final corner. We could also pick out a distant TV screen with a pair of binoculars to keep abreast of positions and lap times.

We arrived early on Friday to make the most of our seats and enjoy the practice sessions. The circuit is easy to navigate and there are plenty of food stands, merchandise stalls and toilets around the track.

In terms of food, you are allowed to bring pretty much anything to the track (no glass, but drinks in plastic bottles are fine). We took full advantage by making ourselves packed lunches every day, so we didn?ů‘ťľ‘šůt need to frequent the predictably pricey food outlets. The only time we did succumb was when one friend bought a can of Fanta for a frankly extortionate ?ů‘«‹?ľ3.50 (?ť?ķ3).

We came well prepared with both raincoats and sunscreen, but the one thing we weren?ů‘ťľ‘šůt prepared for was how windy it was going to be. The unfortunate effect of the blustery weather that followed the rainy Friday morning was that we felt so cold we had no idea that we were getting sunburnt. On Saturday we noticed several other red-faced spectators who’d made the same mistake.

Qualifying was great fun, particularly witnessing the blisteringly fast laps by Rosberg and Hamilton. And then we were treated to a thrilling GP2 race, with Robin Frijns and Tom Dillmann putting in seriously impressive performances.

The support races on the Sunday morning weren?ů‘ťľ‘šůt quite up to the standard of that first GP2 race, but were still enjoyable. The GP3 season got off to a good start, and Porsche Supercup was enlivened by the crowd-pleasing presence of Sebastien Loeb. This was the first grand prix I?ů‘ťľ‘šůve been to for a long time where we didn?ů‘ťľ‘šůt have FanVision as their F1 service was terminated before the season began. It was a shame as I am very shortsighted and have previously relied heavily on the FanVision timing screen during qualifying as I usually can?ů‘ťľ‘šůt read the list on the video walls (even with binoculars, this proved difficult).

We brought radios with us to hear trackside commentary but soon discovered that English-language commentary was only available for the F1 sessions. This was particularly frustrating during GP2 and GP3 qualifying, as the lap times are not listed on the screen, so we had no way of knowing the order until the end of the session. Even during the F1 race, the standard of commentary was pretty poor.

It was clear that we weren?ů‘ťľ‘šůt going to get much useful information, so we had to pay particularly close attention during a race in which most drivers made four pit stops. Many people who watched the race on TV suggested it was quite hard to follow, but I disagree. I?ů‘ťľ‘šům not sure whether the TV direction or commentators are to blame, but from the grandstand it wasn?ů‘ťľ‘šůt too difficult to keep track of what was happening, even with all the pit stops.

The problem with not having commentary is that you miss out on some things. For example we had no idea what had happened to Sutil to put him so far back at the beginning of the race.

But the benefit of being able to see such a long section of the track, particularly a twisty stretch where the cars are not going flat out, is that it was simple to identify the drivers and note their differing speeds; the pace of the Ferraris and Raikkonen stood out massively at various points in the race. We were also lucky in that we could just see the start of the pitlane entrance from our seats, so we were able to spot when a driver was pitting. There were some great battles throughout the pack, which probably didn?ů‘ťľ‘šůt get as much coverage on TV as they deserved, such as the scrap for tenth between Ricciardo and Gutierrez, and the fight between Pic and Bottas. It was really exciting to see how the Caterham was able to chase down the Williams.

When we first got tickets for the race, I decided I wanted Alonso to win, purely because I wanted to experience the atmosphere of a driver winning his home race. I saw both of Nigel Mansell’s victories at Brands Hatch and Riccardo Patrese winning at Imola in 1990 but I was too young at the time to really appreciate either of them.

During the first lap, when Alonso made his killer start and got up to third place, the roar of the crowd was electric. And every time the Ferrari gained a place ?ů‘ťľ‘«£ especially from Sebastian Vettel ?ů‘ťľ‘«£ the crowd went wild. The atmosphere in the stands when he drove around with the Spanish flag after winning the race was fantastic.

However, the crowd soon quietened and many people left before the podium ceremony was even complete. Walking back through Montmelo, there was much less of a party vibe than I?ů‘ťľ‘šůd been expecting. I was slightly surprised by this ?ů‘ťľ‘«£ some of the races I?ů‘ťľ‘šůve been to in recent years have such a fun, festival-style atmosphere that I can only imagine what it would be like for them to celebrate a home winner.

I?ů‘ťľ‘šůd been expecting the joy of Alonso?ů‘ťľ‘šůs victory to spill out from the circuit and be evident in the town and on the train, but it felt like it petered out very quickly. Had this been Mark Webber winning at Albert Park, the whole of Melbourne would have known about it! Although this was a bit anticlimactic I still thoroughly enjoyed my Spanish GP trip. It?ů‘ťľ‘šůs never been one of my favourite races to watch on television, but the combination of a fantastic view and an enthusiastic crowd made for a great experience. With the lack of commentary and my binoculars in hand, I sometimes felt it had more in common with the races my parents took me to in the eighties than the races I?ů‘ťľ‘šůve attended in recent years.

And while this old-school approach didn?ů‘ťľ‘šůt have a detrimental effect on my enjoyment of the F1 race, I still feel that the practice/qualifying sessions and the support races would have been far easier to follow and appreciate had FanVision been available. It?ů‘ťľ‘šůs a real shame that the powers-that-be saw fit to deprive race fans of something so useful this season, without offering anything sufficient to replace it.

While it may not be a classic on the F1 calendar, I would definitely recommend the Spanish Grand Prix to other fans ?ů‘ťľ‘«£ not least because, with an extra day either side, you can combine the race trip with a holiday in a truly beautiful city. And, if the comments on the Rate the Race article are anything to go by, this was one grand prix that was far more enjoyable from the stands than on TV!

Have you been to the Spanish Grand Prix? Share your experiences of it here: