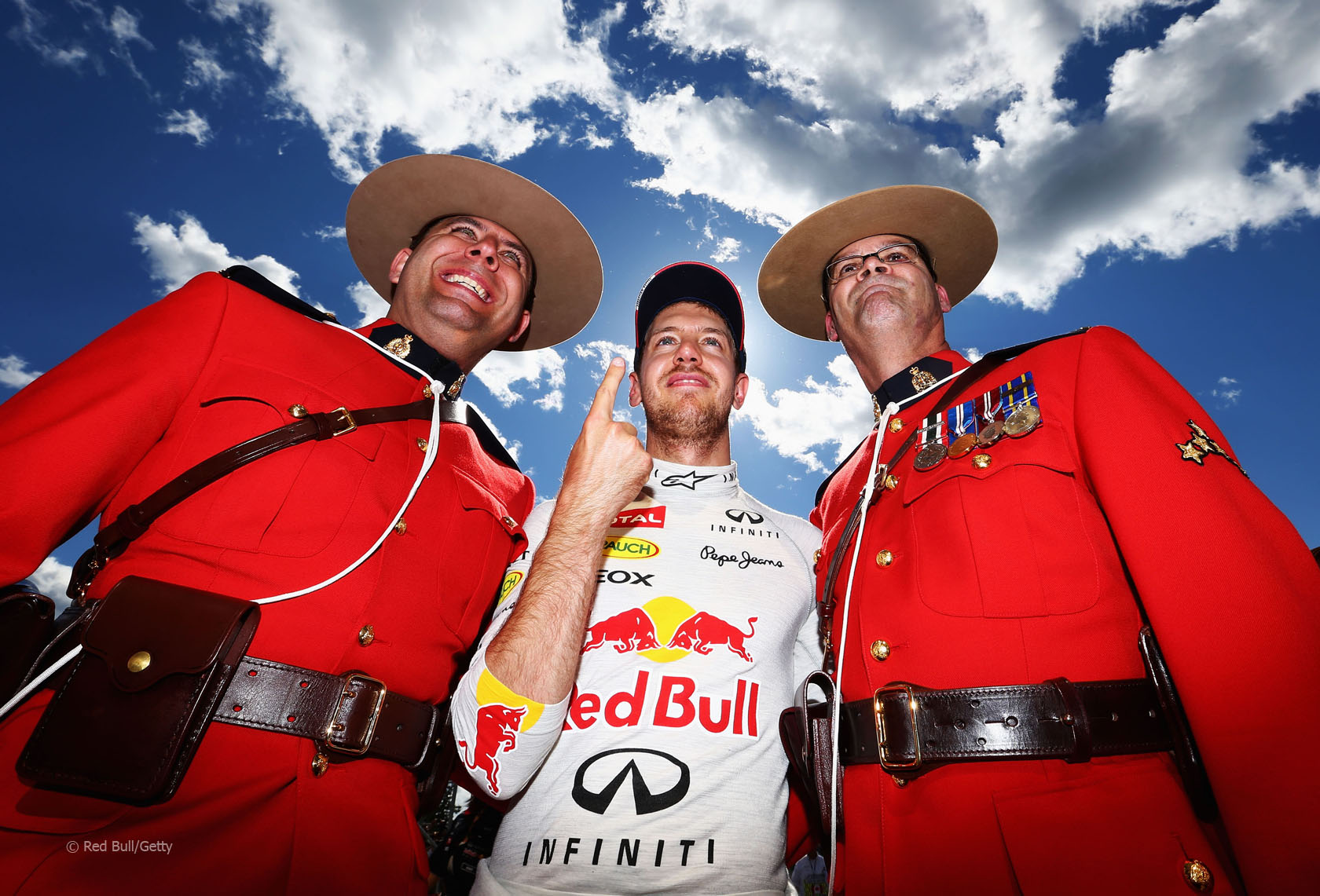 Sebastian Vettel made amends for his last-lap defeat at the Circuit Gilles Villeneuve two years ago and bolstered his championship lead with his third victory of 2013.

It wasn’t a flawless performance from Vettel – he brushed the wall on the way and ran wide at the first corner. But if he occasionally looked like throwing victory away no one ever looked like taking it off him.

The same two drivers shared the front row as last year: Vettel ahead of Lewis Hamilton. But the opening laps were strikingly different: far from keeping Vettel in his sights, Hamilton could only look on as the Red Bull drove away in the opening laps.

Behind them Valtteri Bottas fought hard to hold onto his hard-won third place from qualifying but his car was clearly unequal to the struggle. Nico Rosberg passed him off the line and Mark Webber got past in the opening corners.

Bottas defended firmly and fairly against Fernando Alonso, repeatedly forcing him to the outside, but once they reached the long back straight the Ferrari was easily by.

DRS was enabled on lap three, giving fresh ammunition to the Williams driver’s pursuers. Jean-Eric Vergne was the next man by but Adrian Sutil’s attempt to follow him through went wrong, the Force India spinning at turn four. Daniel Ricciardo took to the grass in avoidance and moved up to eighth with Kimi Raikkonen’s Lotus on his tail.

They were soon joined by the recovering Ferrari of Felipe Massa. He’d made rapid progress in the opening laps, picking off Pastor Maldonado, Sergio Perez and Nico Hulkenberg to gain a toehold on the points positions.

Massa now put Raikkonen under pressure but the Lotus driver responded by taking eighth off Ricciardo, who had started to struggle after his off-track moment. “I felt we could have a good race, but after just four laps, the car was oversteering like crazy and I couldn?óÔéĽÔäót manage the tyres anymore,” he said.

By lap 12 Vettel was six-and-a-half seconds clear of Hamilton. Webber had spent several laps trying to put a move on Rosberg before being advised to drop back and save his tyres to attack later.

Most drivers started the race on the super-soft compound. But the track had been washed clean by persistent rain before race day, making their performance hard to predict, and they started to go off quickly.

Sutil was one of the first drivers to pit, coming in on lap ten complaining of a lack of rear grip. He had also picked up rear wing damage when Pastor Maldonado clipped his car at the second hairpin – for which the Williams driver received a drive-through penalty.

The Red Bulls came in before the Mercedes, Webber on lap 14 and Vettel two laps later, handing the lead to Hamilton. The Mercedes driver hung on for another four laps but was able to continue in second following his pit stop.

Behind him was a converging trio comprising Rosberg, Webber and Alonso who shortly began disputing third place. Rosberg defended hard against Webber, giving him mere millimetres of space on the run to the chicane, but despite having Alonso breathing down his neck the Red Bull driver eventually prevailed. Alonso followed him by into fourth while Rosberg made an early second pit stop on lap 32.

The Mercedes emerged from the pits still in front of Vergne. The Toro Rosso was being pursued by two drivers who had started on medium tyres and were yet to pit: Paul di Resta and Romain Grosjean. Vettel continued to force a rapid pace at the head of the field, giving the wall at turn four a glancing blow on one lap. He later admitted he hadn’t realised his mistake, and when he saw the mark he’s left on the wall on the next lap assumed it had been left by someone else.

Shortly before half distance he put Raikkonen a lap down, race engineer Guillaume Rocquelin urging caution as he did so. It was the latest in a series of frustrations for the Lotus driver who was struggling with his brakes, had been told to conserve fuel and lost time during his first pit stop due to a problem with his rear jack.

Vettel had switched to the medium tyres for his second stint. These proved the better compound and he was able to stretch his middle stint out to lap 50. By then he was far enough ahead to make his final pit stop without losing the lead to Hamilton.

But now Alonso had taken over from Webber in third place. He latched onto the rear of his rival after the Red Bull driver tangled with the lapped Giedo van der Garde at the hairpin, damaging the nose of the RB9.

Van der Garde was slapped with a ten-second stop-go penalty by the stewards and later apologised for his error. But it was scant consolation for Webber who had to watch Alonso breeze past him in the DRS zone, ending his podium hopes.

Alonso set about catching Hamilton in the final stint and he had help from traffic again. This time it was Sutil who got in Hamilton’s way. The former F3 team mates were once good friends, but that ended when Hamilton declined to appear at Sutil’s 2012 trial for assault. Whether it was an oversight on Sutil’s part or something less innocent, he held Hamilton up for ten corners before letting him and Alonso by together.

Shortly after that, Alonso took second off the Mercedes. He then ran wide at turn nine, allowing Hamilton to attack him in the DRS zone, but the Ferrari’s superior straight line speed proved too much for him. Webber slipped back in fourth and behind him Rosberg, Vergne and Di Resta all had big enough gaps behind them to make late pit stops. Di Resta’s was his only visit to the pit lane all race, a one-stop strategy helping him gain ten places by the chequered flag.

Massa took eighth off Raikkonen on the penultimate tour, the Ferrari proving hard for anyone to resist in the DRS zone. Sutil’s drive-though penalty for holding Hamilton up – which he voiced his criticism of afterwards – dropped him to tenth place.

The McLaren pair failed to break into the top ten despite splitting their strategies, and so neither Woking car was in the points for the first time since the last race of 2009.

Grosjean did not stay out as long on his medium tyres as Di Resta did, and when he switched to the super-softs he found “they dropped off far quicker than we expected which forced us to stop again”. The left him 13th.

He was followed by a disappointed Bottas, whose race was a 69-lap regression towards the mean level of performance in the FW35 after his qualifying effort put it far higher on the grid than it deserved to be.

Esteban Gutierrez completed a miserable race for Sauber by crashing into the turn two barrier following a late pit stop. Nico Hulkenberg had already retired after becoming the second driver to collide with Van der Garde while lapping him. The Caterham driver was held responsible for that as well, receiving another penalty after the contact ended his race as well. Vettel’s words after the race had an ominous ring for his rivals. “We had average tyre wear, which hasn?óÔéĽÔäót always been the case for us, so we have made a step forward there.”

The RB9’s treatment of its tyres has been its most significant weakness thus far. Yet Vettel has emerged from the first seven races with a 36-point advantage over his closest championship rival.

Alonso limited the damage by recovering second place. But taking just three points from the last two races will be a cause of concern for Raikkonen. He needs to reverse that decline to stop the championship battle becoming a two-horse race.

The race provided sufficiently strong storylines of its own to briefly quieten the furore over Mercedes’ disputed test. Hamilton and Rosberg ended the race 15 and 70 seconds behind the leaders respectively, indicating that whatever they learned behind closed doors in Barcelona has not solved all their problems with the W04. By the next race at Silverstone in three weeks’ time we should have some answers to the questions posed by that controversy.

25 comments on “Vettel makes amends for 2011 defeat with victory”