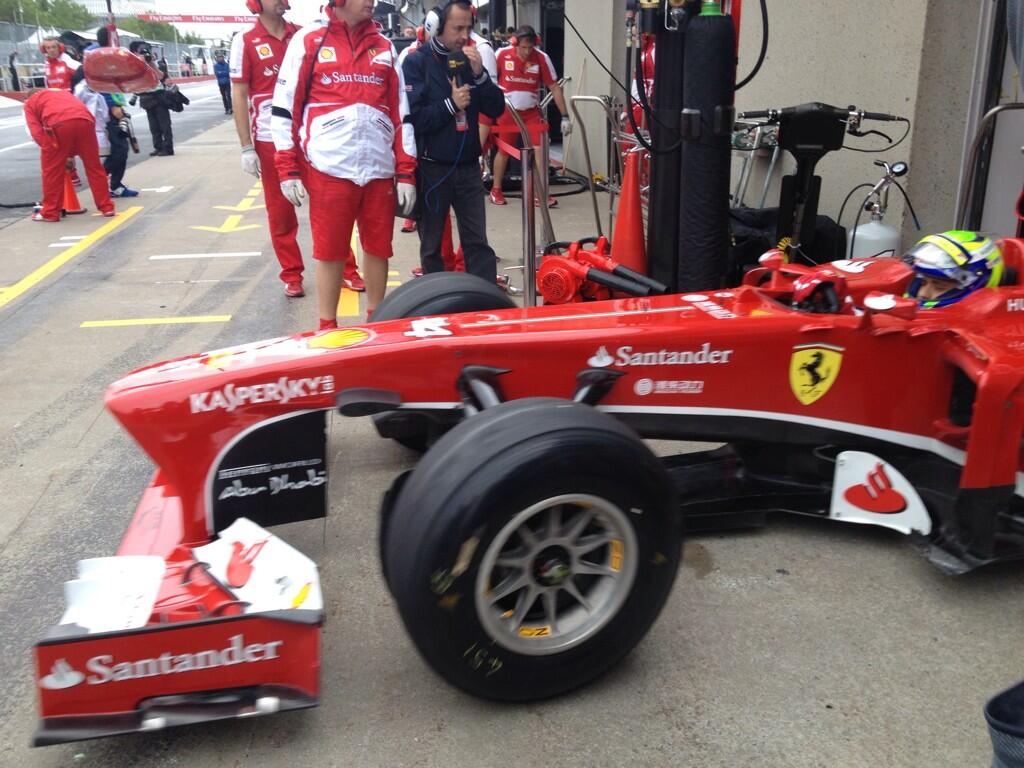 Get a glimpse behind the scenes at the Canadian Grand Prix. Here’s what the teams and drivers shared on Twitter during the Montreal race weekend.

Concerns over the dull weather forecast were uppermost in the teams’ minds as pre-event activities began on Thursday.

To the circuit we go! As the track is on an island, here’s a creative way to get everyone to the paddock… #SFI100 twitter.com/clubforce/stat?ů‘ťľ?™

Bit of an overcast start here in Montreal; not that we mind… it’s time to head trackside! #CanadianGP #F1 twitter.com/Lotus_F1Team/s?ů‘ťľ?™

@danielricciardo just smiling and signing away right this moment twitter.com/ToroRossoSpy/s?ů‘ťľ?™

Charging down into the bus stop chicane… wait, that ain’t right… where are we again? #WhatsTheGP #F1 twitter.com/Lotus_F1Team/s?ů‘ťľ?™

Paul Di Resta celebrated Force India’s 100th Grand Prix weekend with the fastest time in first practice. But the most compelling action of the day came in the team principal’s press conference, where Ross Brawn, Stefano Domenicalli and Christian Horner fielded questions over ‘that’ Pirelli test in Spain.

Someone in the box is thirsty…. twitter.com/InsideFerrari/?ů‘ťľ?™

JB donning his helmet just a couple of minutes ago before heading out for an installation lap. #CanadianGP twitter.com/McLarenF1/stat?ů‘ťľ?™

To confirm, nothing wrong with Jules’ car and no damage. Just an off, he tried to turn and get back on track but everything got a bit hot

#socialfriday @jorython asks: “How much liquid does a driver drinks on a race day?” Regular fluid intake all day, 750ml in the cockpit.

#SocialFriday ?@iluthfur asks: “Can you take a picture of the Mclaren team on the pit wall?” twitter.com/McLarenF1/stat?ů‘ťľ?™

A good long run pace for the two F138s. An intense and positive friday of practice comes to an end.

Final practice was reduced to a mere half hour session following repairs to a barrier damaged in a support race. Qualifying took place in damp and tricky conditions: McLaren lost out, Vettel took pole but it was Williams and Valtteri Bottas who sprung the biggest surprise with third on the grid.

We’re so happy to say that Pastor&Gaby are expecting a baby girl this September! Huge congratulations from us all!! twitter.com/WilliamsF1Team?ů‘ťľ?™

En route into the circuit we?ů‘ťľ‘šůre greeted by sketches from the forthcoming Rush film alongside the current #F1 drivers. twitter.com/McLarenF1/stat?ů‘ťľ?™

Start of the session is delayed due to barrier repairs at turn 11 at the exit of the second hairpin. #F1

Pastor in the car as we wait for the start of #FP3 – barrier still being fixed on track twitter.com/WilliamsF1Team?ů‘ťľ?™

P19 for @rgrosjean plus ten place penalty means a P29 start. @hrtf1team you could be needed. Bring some friends #CanadianGP #PunchLine

We wish for wet weather, it arrives and that’s the result we get!! Well tomorrow should be fun. Looks like it could be an action packed race

Unfortunately we missed another good opportunity today in qual. To much time in the garage with a tech fault, and then it rained.

McLaren failed to score for the first time since Abu Dhabi in 2009 while Mark Webber raged against the backmarker who damaged his car.

45 minutes until the start of the 2013 Canadian Grand Prix. The drivers are going through final warm ups, as are their cars….

Just a warning, Kimi: The last driver to challenge MSC’s record was ALO last year at Belgian GP… But he never got past the 1st corner #F1

Watching build up to canadian grand prix.. Love the interviews with the drivers etc right before race! Great for fans,raikkonen cracks me up

Well – he even has TWO today! The first one is a tribute to a legendary event – the @iom_tt! #SFI100 #NeilsWisdom twitter.com/clubforce/stat?ů‘ťľ?™

And the second t-shirt, well, it had to be a tribute to our 100th race! Thank you Neil! #SFI100 #NeilsWisdom twitter.com/clubforce/stat?ů‘ťľ?™

Perez says his DRS isn’t working. “We think you pressed it too early. Next time come of it and press again.” #F1

A champion wall kiss from Seb there. Will he take that relationship further? #PunchLine #CanadianGP

“OK Kimi the plan is to go as long as we can.” Grosjean doing the same, up to ninth and yet to pit having passed Button. #F1

Rosberg’s defending starting to get borderline. He has to leave a car’s width for Webber when returning to the racing live after deviating.

“My DRS won’t work in both zones,” reports Hamilton. Rocquelin told Vettel to “be patient” when lapping Raikkonen. #F1

I hate how FOM feels the need not only to show random celebrities during the race, but also to caption them

Webber: “Are these backmarkers serious today or what? Unbelievable.” #F1

Curious how both Hamilton and Webber nearly clipped Alonso as they were passed by him at the kink on the pit straight. #F1

#Guti is off. he lost his car. end of race for him. not our weekend, I guess. #ufffff

Paul crosses the line in 7th – an impressive performance after starting 17th! He sets a new personal record of 5 consecutive pts finishes!

Good effort by Vettel and RBR, but maybe everyone else needs to do some secret testing to catch up…

Happy with the race & be second in championship already. Thank you for the support. The moment in the podium very emotional.. #Forzaferrari

Tough race. We did our best and gave everything to get some points,but we just didn’t have the speed for that today. Thanks for all support!

In the aftermath of Sunday’s tragic news that a marshal had lost his life following the race many drivers, teams and media took to Twitter to express their sympathy.