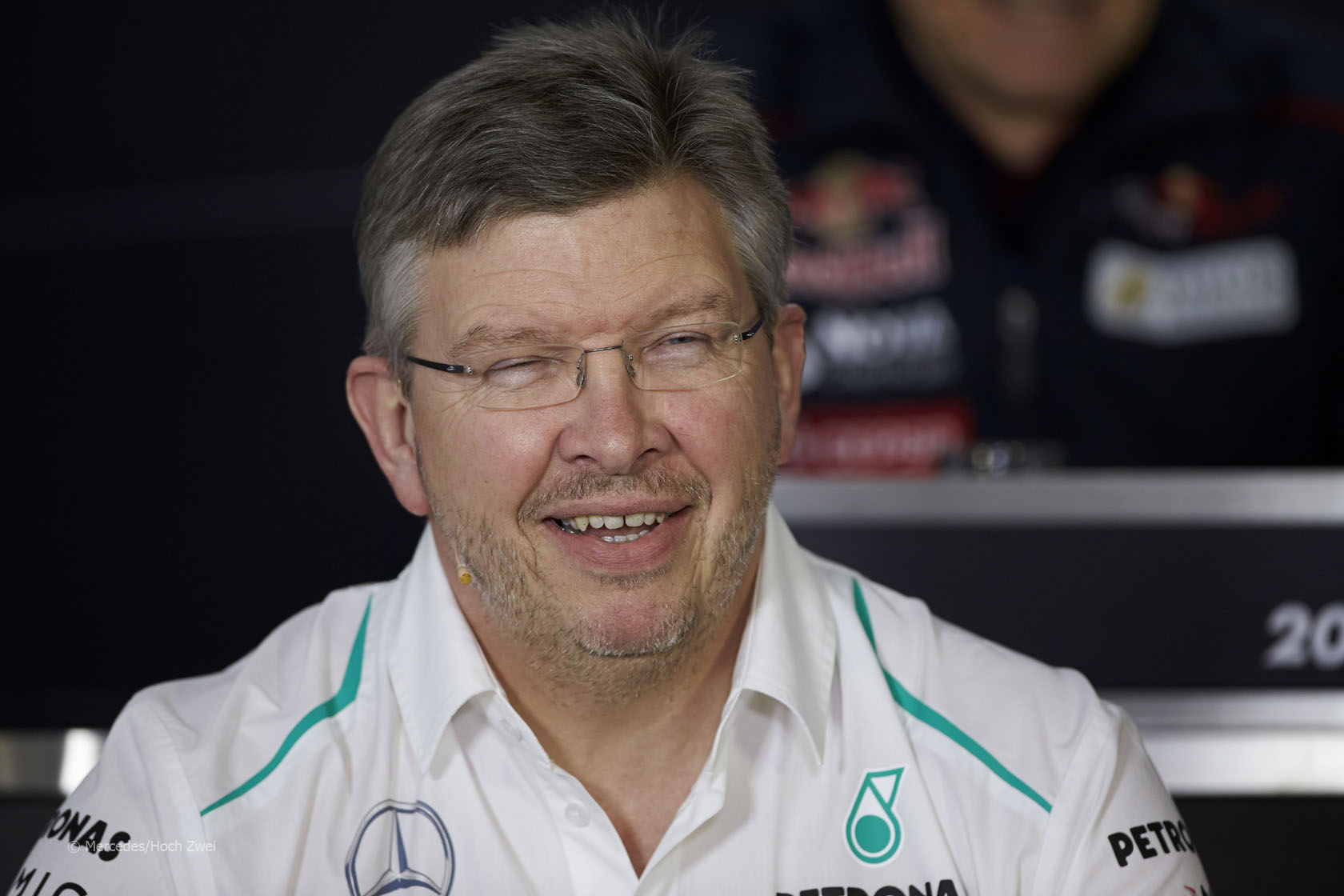 Friday’s verdict by the International Tribunal was a victory for Mercedes and a vindication of the position taken by its team principal Ross Brawn.

The team may have lost its chance to run in the forthcoming Young Drivers Test but it escaped the potentially far worse punishments which could have included a race ban or confiscation of points.

For Brawn it was another encounter with the hand of FIA justice in which he has emerged as the biggest winner. Brawn was the co-designer of the Benetton B194 with which Michael Schumacher clinched the 1994 drivers’ championship.

A major change in the technical rules for that season saw the outlawing of traction control and other driver aids. But the performance of the B194 at the start of races aroused suspicion – not least from Schumacher’s major rival Ayrton Senna prior to his death in that year’s San Marino Grand Prix.

Benetton, along with McLaren and Ferrari, were requested to provide examples of their cars’ source code to the FIA. FIA technical delegate Charlie Whiting found the B194’s launch control programme was still present and could be activated using a computer:

“Launch control” is not visibly listed as an option. The menu was so arranged that, after ten items, nothing further appeared. If however, the operator scrolled down the menu beyond the tenth listed option, to option 13, launch control can be enabled, even though this is not visible on the screen. No satisfactory explanation was offered for this apparent attempt to conceal the feature.

But Benetton were cleared after the FIA ruled they hadn’t used launch control – at least on the occasion in question:

The best evidence is that Benetton Formula Ltd. was not using “launch control” (an automatic start system) at the 1994 San Marino Grand Prix. Had the evidence proved they were, the World Motor Sport Council would have been invited to exclude them from the world championship. Given the evidence available, such a course of action would obviously have been wrong.

Of the various controversies he has been involved in, Brawn singled this out as one he felt especially “aggrieved” about. “We were simply accused of cheating,” he said in an interview in 2007 (republished in a book earlier this year). “All the race data from Imola was available, and it showed no signed of traction control or launch control being used.”

It was the first of several rows Benetton were embroiled in during the 1994 season. Schumacher was stripped of victory in the 1994 Belgian Grand Prix after his B194 failed a post-race plank wear inspection which the team blamed on him spinning across a kerb. He was also disqualified for a driving infringement at Silverstone and banned for two subsequent races. Benetton were cleared on another technical matter during the 1994 season. At the German Grand Prix a fire erupted during Jos Verstappen’s refuelling stop. The FIA subsequently accused Benetton of removing a filter from their refuelling equipment.

Although Brawn was not responsible for the design of the Intertechnique refuelling rig the similarities between this case and the recent row over Mercedes’ clandestine testing are striking.

In last week’s hearing Brawn produced an email exchange between himself, Whiting and an FIA lawyer which indicated they had been given approval to conduct the disputed test. That revelation helped Mercedes avoid a serious penalty.

In 1994, Benetton claimed they had permission to remove to filter from their rig. Following their exoneration by the FIA World Council its president Max Mosley noted explained: “it was allegedly said, at a low level, between Intertechnique and the Larrousse team, and they did produce a letter from Larrousse saying this, and also a drawing from Intertechnique showing how the filter could be removed.”

It was later alleged Mosley advised Benetton’s defence lawyer not to seek to blame the FIA when presenting their defence following a public spat between the governing body and the team.

Five years later Ferrari had hired several key members of Benetton’s ‘dream team’ including Schumacher and Brawn, now technical director. But a one-two result in the Malaysian Grand Prix turned sour when both cars were thrown out after failing a scrutineering check on their barge boards.

Ferrari’s disqualification was a double blow: stripping Eddie Irvine of his victory and handing it to Mika Hakkinen gave the McLaren driver enough points to win the championship with one race remaining.

The team made its appeal at a hurriedly-convened hearing during the two-week gap before the season finale in Japan. Their case, explained by Brawn, was that the FIA stewards had measured the bargeboard from an incorrect reference point on the F199.

The court found in their favour Ferrari got their win back, and F1 got its final-round championship decider. But the title didn’t go to the Scuderia’s driver: Hakkinen won at Suzuka following a lacklustre performance by Irvine. Amid the row over Mercedes’ participation in a covert test for Pirelli an FIA press conference at the Canadian Grand Prix saw Brawn face intensive questioning before a packed room of journalist plus several aggrieved rival team principals. He gave a typically unflappable performance, yielding little ground and making it plain the test was his decision.

His calm and unemotional defence brought to mind a similar encounter ten years previously. Ferrari and tyre supplier Bridgestone had successfully lobbied the FIA to change how they measured tyres which forced their rivals, most of which used Michelins, to hurriedly change their compounds.

During a tense Monza press conference Patrick Head, technical director for Williams who Ferrari were trailing in the championship, piled the pressure on Brawn. Head claimed the Ferrari-instigated change in the enforcement of the rules forced Michelin to change a tyre construction that had been used for the preceding 38 races without objection.

Brawn held his ground, even as laughter greeted his insistence that the timing of Ferrari’s petition to the FIA was not timed to maximise Michelin’s inconvenience but due to Bridgestone being “an extremely ethical company” and reluctant to raise the matter.

But Ferrari had already won the important battle and two days later they won the real one, on the track. It began a string of eight consecutive victories for Ferrari and Bridgestone, during which time Schumacher and Ferrari clinched the 2003 titles.

Honda’s abrupt withdrawal from F1 at the end of 2008 led Brawn, who had joined them just one year earlier, to take over the team. Following two dismal years Honda had made an extraordinary effort to ready its 2009 design in time for a major overhaul of the technical regulations.

But the design of the diffuser on the car, now dubbed a Brawn BGP-001, was a source of controversy – as it also was on Williams and Toyota’s cars. Their ‘double diffusers’ exploited a grey area in the regulations to vastly increased the downforce produced by the rear of the car.

Debate over the legality of the cars raged in the build-up to the season. But all six cars were passed by the scrutineers at the Australian Grand Prix and Brawn sensationally scored a one-two finish in their first race after locking out the front row of the grid.

The stewards found in favour of Brawn and the other two teams when Red Bull, Renault and Ferrari protested the design of their cars. The matter was taken as far as the FIA’s appeal court who stood by the stewards’ decision.

This left most of Brawn’s rivals hurriedly catching up to copy the diffuser design. Some claimed that the ruling, which came during the final, acrimonious year of Mosley’s presidency, had been designed to drive a wedge between the teams who were challenging his plan to introduce a budget gap. Double diffusers were eventually banned at the end of 2010 following Jean Todt’s election as the FIA’s new president. The revelation that Mercedes had conducted a three-day test with Pirelli ahead of the Monaco Grand Prix stunned their rivals when the news emerged following qualifying for the race. Red Bull and Ferrari lodged protests ahead of the race, which Nico Rosberg duly won for Mercedes.

The case was heard by the FIA International Tribunal, a new body set up two years earlier by Todt, who had previously been Brawn’s boss when the pair were at Ferrari. It found that the FIA had given Mercedes an indication that such a test could be allowed.

Although Mercedes were punished, the sanction of a ban from the Young Drivers’ Test was tantamount to a slap on a wrist. The punishment had even been suggested by Mercedes during the course of the hearing.

It left their rivals fuming: Ferrari called it a “rap across the knuckles” and Red Bull team principal Christian Horner pointed out they would always prefer to test using their race drivers instead of junior drivers.

But on the strength of what has gone before they can hardly have been surprised. Brawn has proved time and again his mastery of the rules, procedures and above all the politics of Formula One.

The testing row was not the first time Brawn has appeared before the FIA and come out on top after proving they had made a mistake. It was telling that afterwards he praised the independence of the Tribunal and its willingness to pursue justice even “if that involves some criticism of the FIA as well as other parties.”