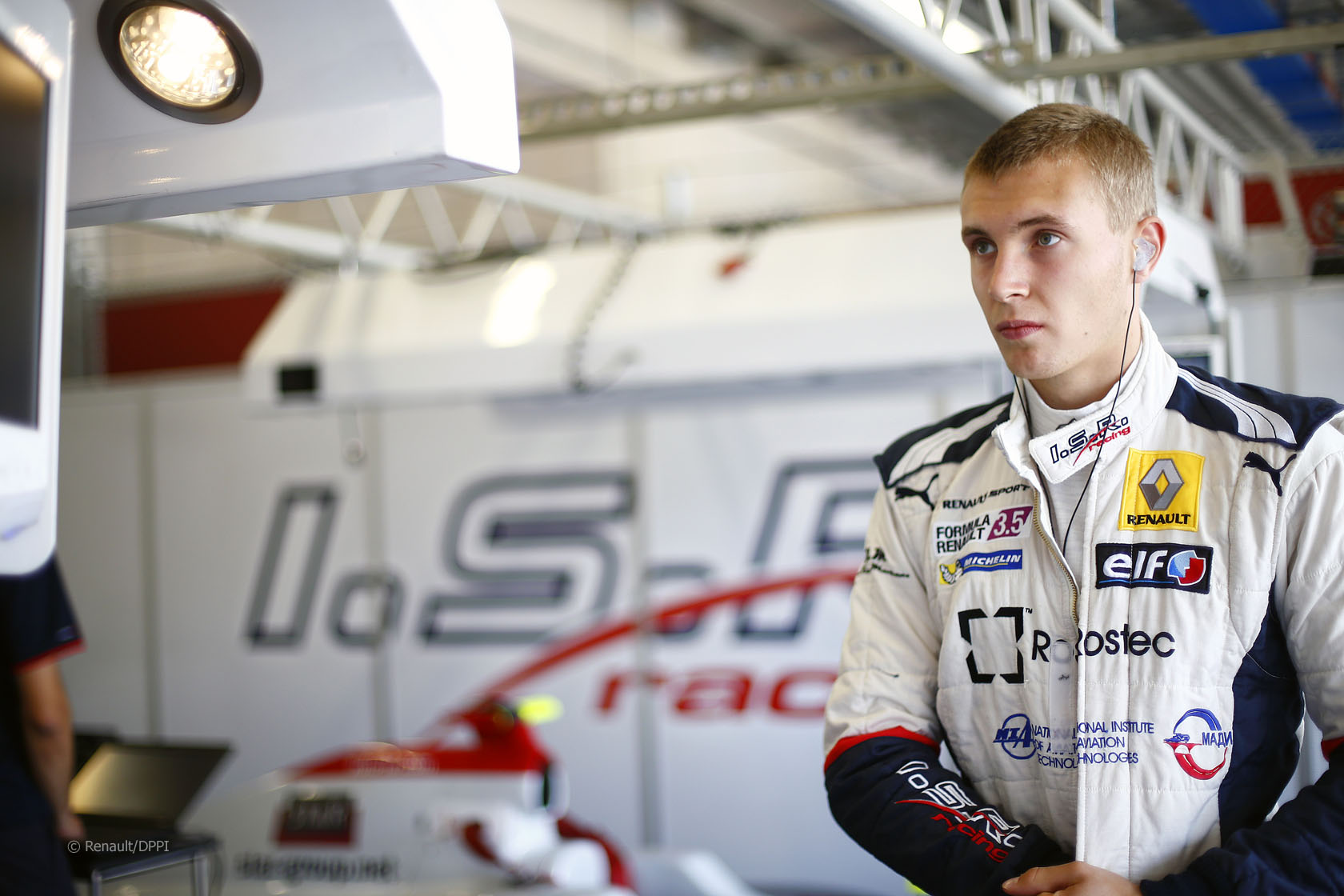 Last month Sauber announced a new technology deal had been agreed with several Russian organisations – and that teenager Sergey Sirotkin was being considered for a drive in 2014.

As Sirotkin’s father Oleg is the director general of the National Institute of Aviation Technologies, one of three groups involved in the Sauber deal, it did not take a cynic to suspect nepotism was the reason why a relatively unknown and very young driver was suddenly in the running for an F1 seat.

But this risks doing a disservice to Sirotkin’s talents. He has shown promise in his somewhat brief career to date, though an F1 debut in 2014 still seems somewhat premature.

Double-duty in F3 and Auto GP

Sirotkin’s first success in single seater-racing came in 2011. Aged just 15 and in his second year of single-seater racing, Sirotkin won the Formula Abarth European series, taking five wins. This was despite a mid-season switch from Jenzer Motorsport to Euroracing, the team run by 1995 Formula 3000 champion (and, briefly, F1 driver) Vincenzo Sospiri.

The following year Euroracing moved him up to Auto GP, whose ex-A1 Grand Prix cars were over three times more powerful than those he’d driven before. But Sirotkin wasn’t fazed by the power hike: He started his first race from the front row and although he stalled at the start he recovered to finish fourth in the second race.

Despite his inexperience Sirotkin continued to impress in Auto GP. On his street circuit debut in Marrakesh he put the car on pole position. Unfortunately he was caught out at the start when he caught site of a marshal holding a five-second board and wasn’t expecting the lights to change.

Rookie mistakes aside, Sirotkin clearly had raw pace. He won his third start at Valencia despite a busy weekend where in addition to two Auto GP races he also made a trio of appearances in the Italian Formula Three series.

Switching between different types of car is tough enough when done on consecutive weekends as Antonio Felix da Costa discovered last year while juggling GP3 with Formula Renault 3.5. The overlap between Sirotkin’s two campaigns was even more demanding and can’t have been to his benefit.

He was on double duty again at the Hungaroring, winning one of the F3 races, and was on course for second in the first Auto GP race before his gearbox failed. He bounced back to finish on the podium in the second race.

From then on he finished in the top four in all the remaining Auto GP races, and only once failed to bring the car home on the podium. He ended 2012 third in Auto GP and fifth in Italian Formula Three.

This year Sirotkin has wisely chosen to concentrate on a single category: Formula Renault 3.5. Second place in appalling conditions at Motorland Aragon has been the highlight of his season so far, though he remains the second-highest rookie in the championship standings. Earlier this week Sauber squashed rumours which claimed their Russian deal was in jeopardy. They were particularly keen to stress the Sirotkin project is moving forward:

“The contract with driver Sergey Sirotkin is in place. Preparations for his involvement in the team, as likewise announced, will start next week.”

This raises two questions: what exactly will his “involvement in the team” be, and how are they going to prepare him for it?

If Sauber plan to have Sirotkin in one of their cars on the starting grid at Melbourne next year, they’re going to have to move fast. He doesn’t have a superlicence yet and will not automatically qualify for one unless he wins the Formula Renault 3.5 championship, which is extremely unlikely at this stage.

He will therefore need to log 300km of testing within two days to get a superlicence. Sauber can’t do this using Friday practice sessions (as a superlicence is needed to participate). ‘Promotional’ running is limited to 100km per event, so that’s not an option, and he’s already missed the Young Drivers’ Test.

That leaves Sauber with the option of using their straight-line aerodynamic testing allocation or waiting until pre-season testing next year. The former would surely be preferable.

Too much too soon? But whatever they do if Sirotkin does make his F1 debut in March next year he will be the youngest driver ever to start an F1 race by several months, and one of the least well-prepared of recent seasons.

There are examples of racing drivers being successful after making early moves to Formula One. Kimi Raikkonen famously had made fewer than two dozen starts, all of them in fairly low-powered Formula Renault 2.0 cars, before making his debut in 2001.

Sauber has a deserved reputation for nurturing young talent and Raikkonen is an excellent example of that, along with Felipe Massa and Sergio Perez. But in Sirotkin’s case there is clearly more going on than a team identifying a promising up-and-coming driver.

Business imperatives are pushing Sirotkin towards an F1 drive, perhaps too quickly. He has admitted it might be preferable to spend another year in Formula Renault 3.5. But the temptation of F1 is hard to resist – especially with Russia holding its first Grand Prix next year.

Sirotkin has shown promise in his junior career and his Auto GP experience proves he can handle life in the deep end of the pool with a much more powerful car than he’s used to. The question is whether he’s jumping in or being thrown.

Do you think Sergey Sirotkin is ready to make his grand prix debut? Does the backing drivers bring play too much of a role in deciding who makes it into F1? Have your say in the comments.