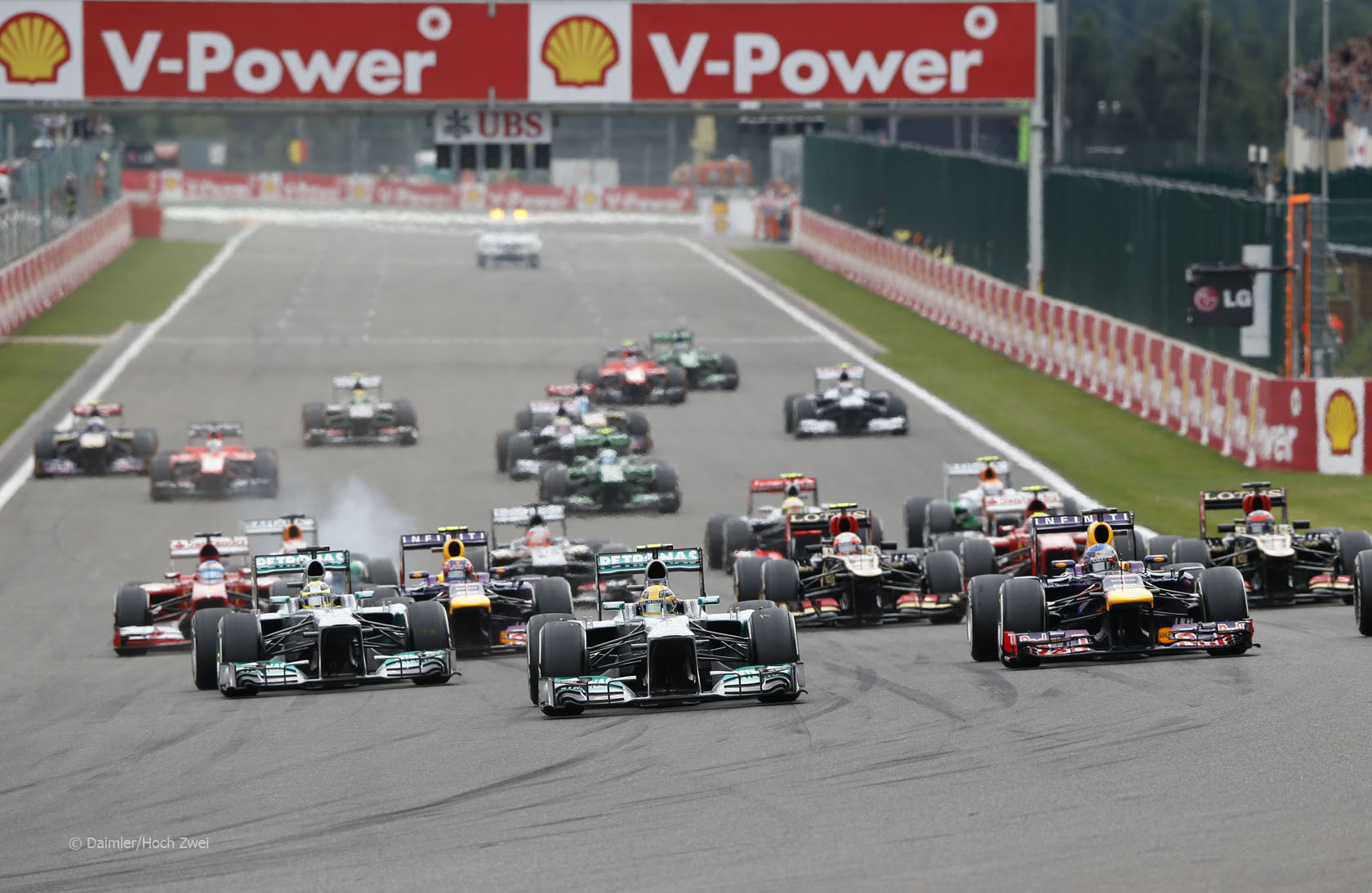 Sebastian Vettel – Vettel held the whip hand during practice, even though a puncture cost him some running in second practice. Hamilton pipped him to pole in the wet Q3 but judicious use of KERS at the start and a committed run through Eau Rouge gave Vettel an irresistible run on the Mercedes to take the lead. After that he has never headed.

Mark Webber – Close to Vettel on pace all weekend but was a tenth off in qualifying and made another of his poor starts. Sixth by lap two, he passed Button but was unable to crack the two Mercedes.

Fernando Alonso – Ferrari had clearly made gains this weekend and in the dry part of Q2 Alonso was just a few hundredths of a second off the fastest time. But then the rain came and he ended up ninth on the grid. A typically strong start got him past both Lotuses and – importantly – Webber’s Red Bull. Button and Rosberg were easily dispensed with in the DRS zone and he out-braked Hamilton for second at La Source. Even if he’d qualified better it’s hard to see how he could have finished higher.

Felipe Massa – Also started well but had to run wide to avoid contact at the first corner, losing positions to Hulkenberg and Perez. He was hampered by a KERS glitch in the early running but the Grosjean/Perez incident effectively handed him two places. An early first pit stop also helped him move back up the order, though not as effectively as Alonso was able to. Jenson Button – Arrived at Spa believing a podium was possible and left in a similar frame of mind. He reached the top ten in the dry conditions of Q2, then when the rain came in Q3 he produced a lap good enough to beat the Lotuses and Ferraris. Had McLaren extended his first stint to allow him to complete the race with a single stop it’s possible he might have finished higher than sixth, though third may have been too optimistic all along.

Sergio Perez – Had he left the pits a few seconds earlier in Q2 he would probably have reached Q3. Perez gained two places at the start but spoiled a pass on Grosjean by needlessly squeezing the Lotus driver, earning himself a penalty. He was clearly unhappy with the stewards’ decision during the race, but afterwards said “I now understand where the penalty came from”. McLaren converted him to a one-stopper but Ricciardo edged him out of the top ten with four laps to go. Kimi Raikkonen – Both Lotuses performed less well when the rain fell during qualifying and neither of them made good starts to the race. Raikkonen got ahead of Grosjean on the second lap but a visor tear-off had got into his left-front brake duct, causing the disc to overheat. It was removed at his pit stop but the brake was already too far gone and it eventually put him out, ending a 27-race scoring streak and leaving him 63 points behind Vettel in the championship.

Romain Grosjean – Out-qualified Raikkonen for the third time in four races but lost ground in the race when Perez forced him wide, allowing Massa through. Ran a one-stop strategy in an attempt to gain ground, and did jump ahead of the Ferrari, but was re-passed late in the race.

Nico Rosberg – If Rosberg had had enough time in Q3 to set another lap, as Hamilton did, it’s likely he would have challenged for pole position as he was flying in the damp conditions. His race was more subdued, finishing fourth.

Lewis Hamilton – Hamilton’s claims his fourth pole in a row was a “surprise” does not seem that unreasonable considering he was outside the top ten in all three practice sessions and only scraped into Q3 by a few hundredths of a second. Fell victim to Vettel at the start but might have made Alonso work a bit harder for second place. Nico Hulkenberg – Not for the first time this year Hulkenberg found himself eliminated in Q2 by a slender margin. Continuing a running theme of his season he began and ended the race unhappy with his tyre degradation, and was out of the points.

Esteban Gutierrez – Gutierrez showed clear signs of improvement but wasn’t able to capitalise on them. He was caught out in Q1 for the seventh time this year and started on the back row. His race pace looked at least a match for his team mate’s and might have beaten him had he not collected a drive-through penalty for going off the track while passing Maldonado.

Paul di Resta – After spinning in Q1 Di Resta almost pulled off a shock in Q3 by playing a tactical blinder. He left the other nine drivers to try in vain to set a time on a wet track using slick tyres, then left the pits on intermediates and had the track to himself. However the Mercedes and Red Bull drivers were able to beat his effort, leaving him fifth. despite a poor start with a lot of wheelspin he only fell as far as seventh. His first pit stop dropped him behind Massa and he then fell victim to Maldonado’s carelessness.

Adrian Sutil – While Maldonado took his team mate out and Gutierrez took care of himself with a drive-through penalty, Sutil was there to pick up the pieces. He didn’t qualify that well and made a poor start, but even so it’s doubtful he would have finished much higher than eighth.

Pastor Maldonado – Was one of several drivers to be caught out by the Marussias and Caterhams using slick tyres in Q1. Maldonado felt Williams committed to intermediate tyres too soon, leaving him 17th on the grid. He was coming to the end of his second stint on lap 27 when Gutierrez tried to pass him, followed by the two Force Indias. As Maldonado tried to make for the pits he clipped Sutil, then took out Di Resta entirely, earning himself a stop-go penalty.

Valtteri Bottas – Started behind Gutierrez and the two Toro Rossos and finished there. “We were struggling for pace in sector two and this made it difficult to get close to the cars in front and once I had been overtaken it was very difficult to regain the place,” he said. Jean-Eric Vergne – Another driver who looked quick early on in qualifying but missed the cut in Q1. “It was just a team mistake,” he said afterwards. “These things shouldn?óÔéĽÔäót happen, but everyone gets it wrong now and again. It is very frustrating.” Made patient progress on race day and felt he could have finished higher but for a slow puncture during his final stint.

Daniel Ricciardo – Also got caught out during Q1. Ricciardo fought back by running long in his first stint on hard tyres then pushing during the final two on mediums. In his last stint he passed his team mate, Hulkenberg and Perez to claim the final point from 19th on the grid.

Charles Pic – Unlike his team mate he did not use slick tyres for his final run in Q1 and the difference between them at the end was stark: Van der Garde was almost seven seconds quicker. Bad luck struck again in the race when his engine failed early on.

Giedo van der Garde – After the high of finishing Q1 third thanks to his slick tyre gamble he lined up 14th on the grid. Within five laps he was down to 19th, unable to mount any realistic opposition to the faster cars he’d jumped ahead of in qualifying. Maldonado’s penalty helped him to 16th.

Jules Bianchi – Both Marussias reached Q2 thanks to their slick tyre gamble but once again they did not look like beating the Caterhams on merit. Radio problems hampered his race but he was generally quicker than Chilton.

Max Chilton – As usual he wasn’t miles off Bianchi’s pace but never really looked like beating him either – particularly after he collected a drive-through penalty for failing to respond to blue flags.

Who was the best driver of the 2013 Belgian Grand Prix weekend?