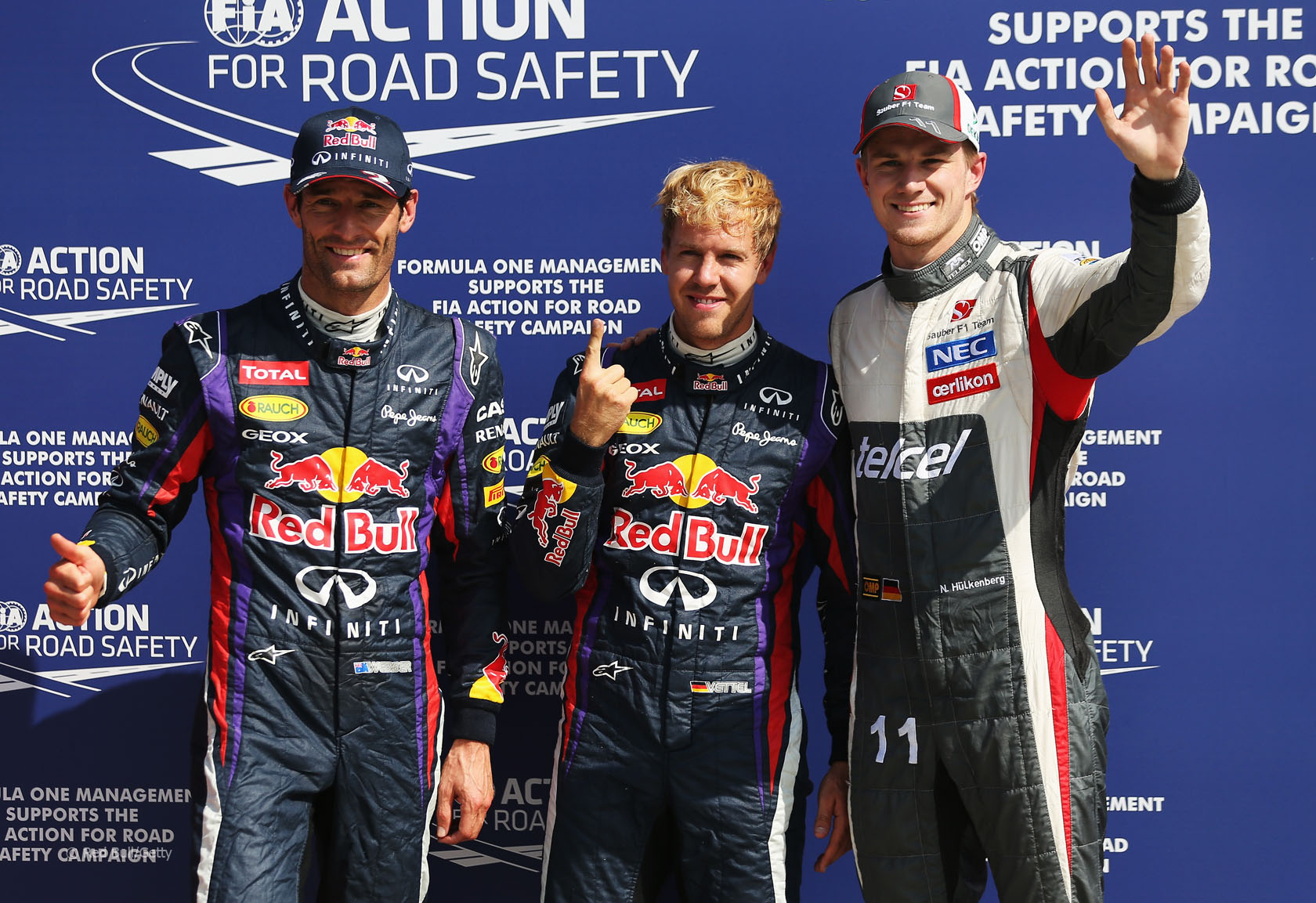 Red Bull locked out the front row of the grid for the first time since the Australian Grand Prix as their rivals hit trouble in qualifying at Monza.

Two of Sebastian Vettel’s closest championship rivals – Lewis Hamilton and Kimi Raikkonen – were knocked out in Q2. And Ferrari’s efforts to move Fernando Alonso further up the grid did not produce the desired result.

While Vettel claimed his fourth pole position of the year Nico Hulkenberg claimed an impressive third for Sauber, beating both of the Ferraris.

A fairly standard Q1 session for 2013 saw the Marussias and Caterhams go out as usual along with Valtteri Bottas and Esteban Gutierrez.

Pastor Maldonado was in the drop zone until the final moments when a late final lap got him up to 12th.

A confident Vettel stayed in the pits and didn’t set his first lap until there was less than seven minutes remaining, then set the fastest time with his second lap. The Mercedes drivers were next, Rosberg making an early start to the session after missing out on running during final practice.

Red Bull cut it fine again in Q2, both drivers starting their final laps with less than four minutes to go. But again it proved no problem: Webber came within four-hundredths of a second of beating Alonso’s fastest time up to that point, while Vettel’s 1’23.977 was the fastest time of the weekend so far.

Lewis Hamilton’s first run did not go according to plan as he skidded into the gravel at Parabolica, ruining his lap as well as his tyres. He got back out in time for a second run but again Parabolica was his undoing.

This time he caught the Force India of Adrian Sutil which spoiled his run through the final corner. His time was briefly good enough to put him in the top ten but he was quickly knocked out by faster drivers.

The two Lotus drivers were also in trouble: Neither of them were quick enough to make the cut. Romain Grosjean said his out-lap was a “disaster” – he ended up 13th, four-tenths of a second shy of the top ten.

With Hamilton and Raikkonen left by the wayside in Q2, that left Alonso as the likeliest rival to Vettel. Ferrari adopted the tactics they had used the year before of having Massa give him a tow to boost his straight-line speed.

It worked to begin with, bringing Alonso closest to the Red Bulls, who set the pace at the beginning of the session. But it didn’t go according to plan on their final run. Alonso advised his team on the radio that Massa was too far ahead, leaving him without the benefit of a tow.

Making matters worse for Alonso, Massa edged him by a hundredth of a second on their final runs, taking third place off him.

Then came the surprise of the session. Nico Hulkenberg – who more often than not has missed out on Q3 by a few hundredths of a second this year, produced an inspired lap to take third place, relegating Alonso to the third row.

Both Toro Rossos also made it into the top ten but had reasons to be disappointed with the end result. Daniel Ricciardo initially split the Ferraris with his first lap before slipping to seventh. And Jean-Eric Vergne skidded into the gravel at Parabolica on his last run, leaving him tenth.

Webber came close to beating Vettel’s time with his final lap, setting the fastest middle sector time, and was probably not inconvenienced too badly by Vergne going off in front of him, but had to settle for second. At any rate, Vettel found even more time with his final run to secure his fourth pole position of the year.