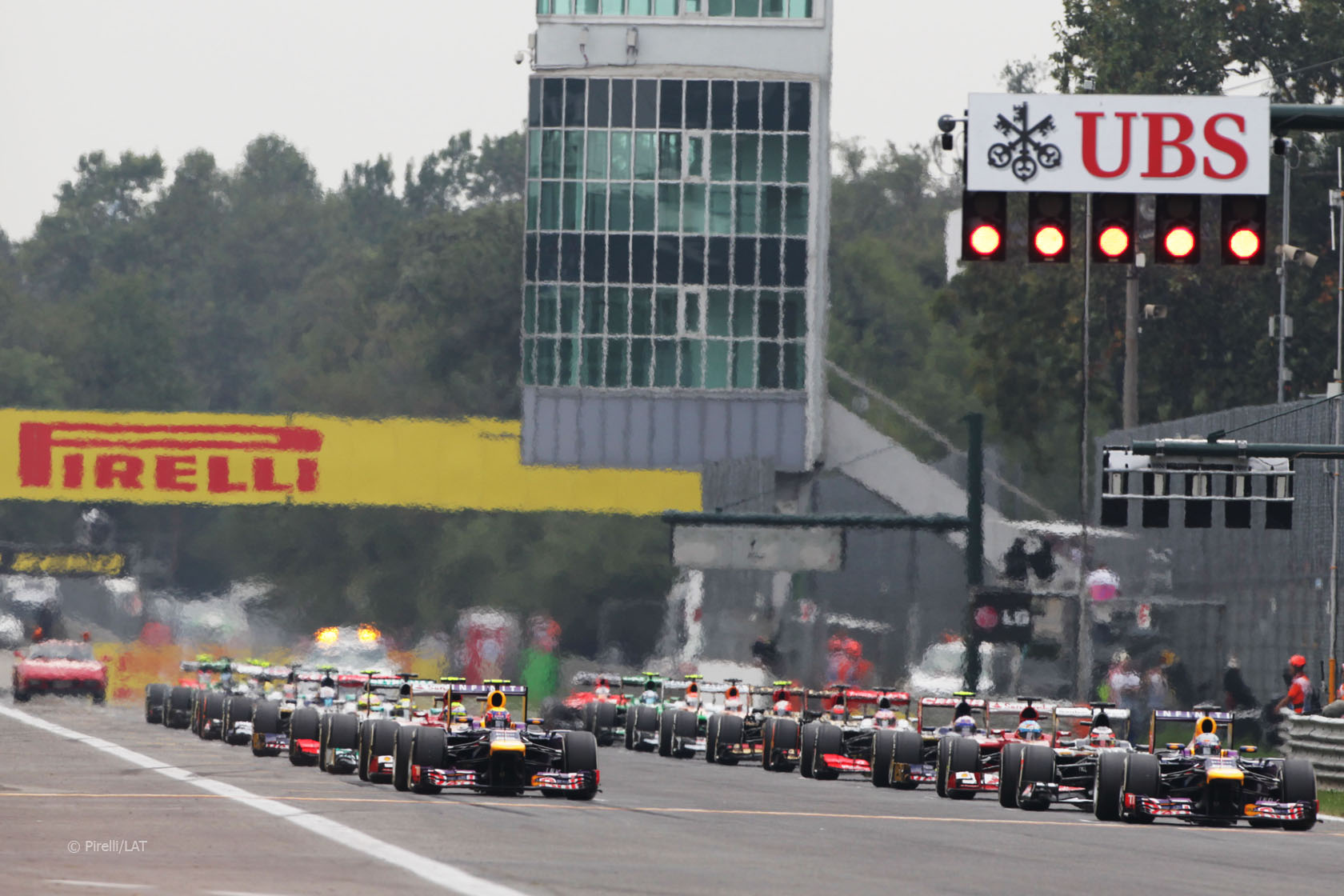 Sebastian Vettel – As at Spa, Red Bull seemed to have more of an advantage on Friday than Saturday. But it was still sufficient for Vettel to take his fourth pole position of the year. He had speed to throw away in the race but spent a significant part of it concerned about technical trouble – he locked his brakes on the way to the first corner, damaging his front-tyre tyre which had to be watched closely. Towards the end of the race Red Bull were preoccupied with worrying signs from his gearbox. But there was no repeat of his Silverstone failure and he claimed win number six of 2013.

Mark Webber – Started from the front row of the grid for the first time since Melbourne, but was beaten to the first corner by Massa. The other Ferrari of Alonso demoted him on lap three, but Webber came back at his rival in the final stint. This was thanks to excellent pit work by Red Bull, who brought both drivers in on the same lap allowing Webber to undercut Massa and get ahead. Webber applied sustained pressure to Alonso in the final stint despite a gearbox problem but had to settle for third.

Fernando Alonso – Should have started from the second row of the grid, particularly with his team pulling out all the stops to help him, even putting Massa’s qualifying chances in jeopardy by having him give Alonso a tow. It didn’t work, Alonso ended up fifth, and vented his frustration on the radio. In the race things went more according to plan: he sprang a brilliant pass on Webber on the outside of the Roggia chicane which even Alonso thought might not work. Massa handing over second place was a formality, but the final stint was more a case of keeping Webber behind than chasing down Vettel.

Felipe Massa – Pipped Alonso to fourth place by a hundredth of a second once he was able to focus on his own lap. Lost at least a second letting his team mate past during the race which helped Webber to get within range. Red Bull took advantage, pitting Webber early to jump ahead of Massa, forcing him to settle for fourth. Jenson Button – Felt the team shouldn’t have bothered setting a time in Q3 as there was too little to gain: he ended up ninth, a few thousandths of a second the margin between him and Perez. In the race the team found they’d set seventh gear too low, compromising their drivers’ efforts to make up places. Button was picked off by Grosjean and Hamilton in the second stint but hung on to claim a point despite a severe shaking from a flat-spotted tyre.

Sergio Perez – Cut the chicane at the start after being nudged from behind by Raikkonen but held onto his eighth place. However a slow pit stop dropped him to tenth and his lack of straight-line speed made him easy pickings for Hamilton and Raikkonen.

Kimi Raikkonen – Lotus looked in good shape on Friday: Raikkonen tested a long-wheelbase version of the E21 and although he was no faster than Grosjean in it, they were ‘best of the rest’ behind the Red Bulls. That pace vanished on Saturday and neither of the black-and-gold cars made it into Q3, Raikkonen lining up 11th. This left him vulnerable to first-corner chaos and sure enough he tagged Perez’s McLaren, breaking his front wing and forcing a costly first-lap pit stop. From there he wasn’t able to get back into the points on a day when Lotus were off the pace.

Romain Grosjean – Was knocked out in Q2 along with his team mate, complaining his out-lap went poorly. The race was more successful – he passed both McLaren drivers and despite coming under attack from Hamilton on the final lap was able to hold on to eighth.

Nico Rosberg – Missed much of final practice but still managed to get into Q3, though it was a surprise to see the fastest Mercedes down in sixth. He finished where he started after spending the race staring at Hulkenberg’s rear wing.

Lewis Hamilton – Looked handy in Q1 but Q2 was a disaster – he went off at Parabolica and damaged his car on his first run, then caught Sutil at the same corner on his second run, losing time and missing the cut. “I drove like an idiot,” he admitted after his four-race streak of pole positions came to an end. His team gambled on starting the race with hard tyres, prepared to sacrifice performance at the start to come on strong later. Unfortunately he picked up a puncture early on which compromised this strategy. After two stops he used his tyre advantage in the last stint to pass a string of cars, but running wide at the Roggia on the last lap meant he had to hand eighth place back to Grosjean. Nico Hulkenberg – Starred in qualifying, snatching a brilliant third place, beating both Ferraris. Although they passed him at the start Hulkenberg yielded no further ground in the race. The Sauber seemed to be transformed at a circuit where the team expected to chew their tyres in the slow corners. Hulkenberg even closed in on the Ferraris during the final stint on his way to an excellent fifth.

Esteban Gutierrez – Continues to struggle in qualifying – this was his eighth Q1 elimination. Again the race was better, but the gap between him and Hulkenberg in qualifying made a huge difference.

Paul di Resta – Went off at Parabolica during final practice when a brake disc failed, fortunately without causing serious damage. Missed his braking point at the Roggia chicane on the first lap and hit Grosjean. Luckily for him the contact only ended his own race, or his punishment would surely have been tougher than a reprimand.

Adrian Sutil – Of all the cars Sutil could have held up by dithering at Parabolica, it had to be Hamilton, who he has fallen out with lately. The stewards concluded it wasn’t intentional, but moved him back three places on the grid. Force India continue to lack pace since the change in tyre construction and Sutil never looked like challenging for the top ten before retiring with a braking problem on the final lap.

Pastor Maldonado – Produced a very good lap to get Williams into Q2. He then lost time at the weighbridge which compromised his next run, but it’s doubtful the car was capable of reaching Q3. On race day he could do little more than watch the gap grow between his car and the faster ones ahead.

Valtteri Bottas – It was a similar situation for Bottas, who finished eight second behind his team mate: “I couldn’t really challenge any of the cars ahead as we just didn’t have the race pace today.” Jean-Eric Vergne – Lamented that he seems to be spending more time watching the races on television this year instead of competing in them after his fifth race-ending technical failure, this time due to an engine failure. He at least achieved his third Q3 appearance of the year.

Daniel Ricciardo – Provided some justification for his impending promotion to Red Bull with a safe-pair-of-hands performance, starting seventh and finishing there.

Charles Pic – Caterham were unusual in that they were the only team who made two pits stops for each driver out of choice. Pic pulled far enough ahead that he was able to leave the pits after his second stint with almost ten seconds in hand over the Marussias.

Giedo van der Garde – Unlike Pic, Van der Garde came out between the Marussias and had to pass Bianchi to back his team mate up in 19th.

Jules Bianchi – Said he “ran out of time” trying to suss out the best set-up for his car and ended up half a second off the slowest of the Caterhams. Particularly struggled for pace on the hard tyre.

Max Chilton – Also struggled with his car’s balance but stayed close to his team mate “despite experiencing the toughest blue flag phase of the season”.

Who was the best driver of the 2013 Italian Grand Prix weekend?