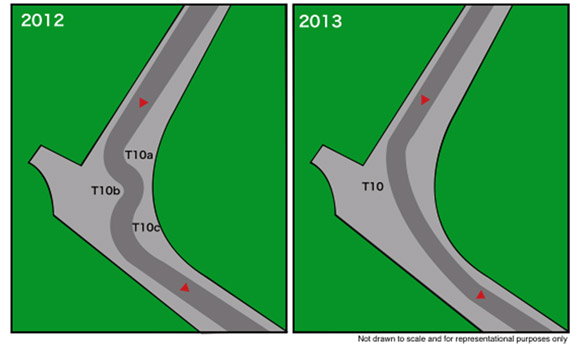 In the round-up: Singapore’s F1 circuit will be a second per lap faster now the chicane has been removed, Fernando Alonso reckons.

FIA ready to get tough on cost cuts (Autosport)

Jean Todt: “We met in Maranello with a few teams, and a consensus was against this [RRA] proposal of cost cutting.”

“Another interesting figure in the picture is Johannes Hogrebe. He?óÔéĽÔäós the Tilke engineer who worked with Hellmund and motorcycling legend Kevin Schwantz on the design of Circuit of the Americas, engineering their ideas into reality.”

“There was one big, seemingly insurmountable problem, they said. Their boss, Luca di Montezemelo. Kimi had not been very respectful of him when the time came to leave and that was causing an impasse.”

Vijay Mallya battles against winding up Kingfisher (The Times of India)

“Debt-ridden Kingfisher Airlines’ beleaguered chairman Vijay Mallya is battling against aircraft lessors and financiers who moved the Karnataka high court for winding up the company for defaulting on loans by his holding company – United Breweries Holdings Ltd.”

Clive James: If Berlusconi ran the BBC… (The Telegraph)

“When the F1 circus was away touring the world, there was sometimes no saving the show from tedium: the tarmac sat cooking on the desert and you couldn?óÔéĽÔäót see a tree. But lately, thank heaven, we have been back in Europe, and whether at last Sunday?óÔéĽÔäós GP at Monza, or at the previous GP at Spa, the Beeb?óÔéĽÔäós presentation team have proved that they are fully in command of their three microphones.”

“Cars are rolled back and forth along the grid, German-centric banners are pulled from the Armco and re-strung with smiley bright Brazilian logos. Quickly, the Nurburgring morphs into Interlagos, and the whole thing starts anew.”

These days working in the simulator. New turn 10 in Singapore this year, without the chicane of before.The lap is around 1sec faster..

"Pick up some milk. We're all out" by @Dom93IOM. Well done Dom! We'll be in touch soon to get your details via PM. pic.twitter.com/yFZaf97UAq

The FIA has spoken to Lotus about yesterday's bunny Tweet and been assured no offence was intended.

Can tell I was driving old F1 cars yesterday, bruised all over. Drivers were basically chassis bulkheads and human safety cells back then

Hulkenberg ?óÔéĽÔÇŁ probably the best choice both for Lotus and him, no explanation needed.
Maldonado ?óÔéĽÔÇŁ has a lot of money through PDVSA, he can be brutally fast but is inconsistent, good for occasional big results, not in a championship.
Kobayashi ?óÔéĽÔÇŁ another good choice, he should get an F1 seat, and this would be a great opportunity for him.
Kovalainen ?óÔéĽÔÇŁ this is his best chance to get into a better team than Caterham and he was pretty good with the Enstone team in 2007.
Valsecchi ?óÔéĽÔÇŁ I don?óÔéĽÔäót think he will get a seat with Lotus, he didn?óÔéĽÔäót drive too much at the YDT which I would have expected as he is their test driver but I’m not ruling him out at all.
Felipe Nasr ?óÔéĽÔÇŁ has great race craft, his overtakes are amazing and has wealthy Brazilian sponsors, and I heard he doesn?óÔéĽÔäót want to get into F1 through a small team.
Robert Wickens ?óÔéĽÔÇŁ he tested with Lotus in 2009, won Formula Renault 3.5 in 2011 ahead of Vergne and has a great season in DTM, and North America hasn?óÔéĽÔäót had a good driver for a long time.
Funocsi (@Hunocsi)

Ferrari fielded two world champion drivers in a race for the last time on this day 60 years ago. That streak is set to end when Kimi Raikkonen joins Fernando Alonso at the team next year.

Alberto Ascari and Giuseppe Farina were among the Scuderia’s six-car team for its home race at Monza today in 1953.

They shared the front row of the grid separated by the sport’s only other world champion at the time – Juan Manuel Fangio, driving a Maserati.

The three fought for victory until the last lap when Ascari skidded, forcing Farina to take evasive action, and allowing Fangio to give Maserati their first world championship victory.

Here’s footage from the race and Fangio talking about it 13 years later in an advertisement for Pirelli: