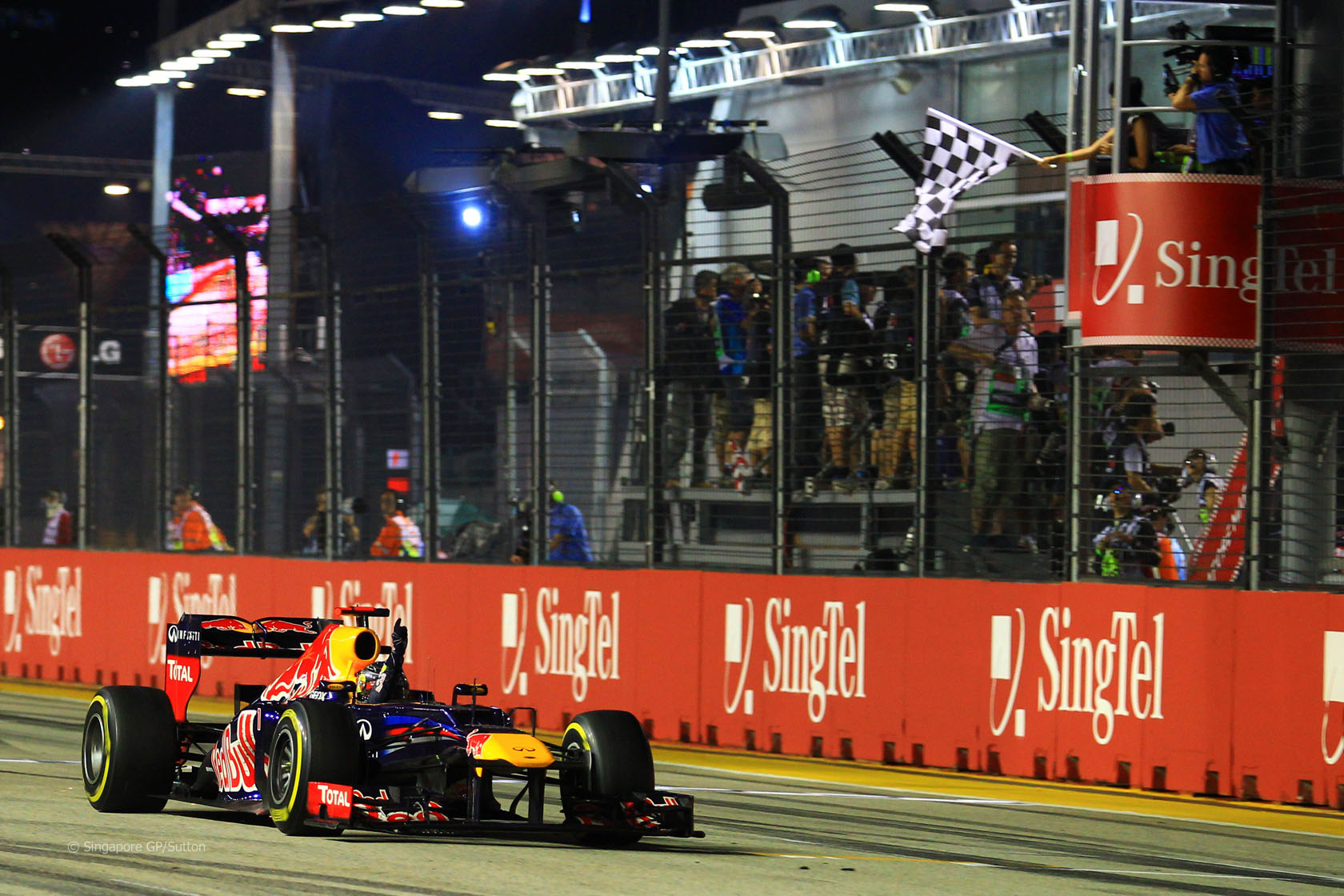 Sebastian Vettel heads into the Singapore Grand Prix weekend looking for his third consecutive win in F1’s night race to tighten his grip on a fourth world championship crown.

His rivals’ increasingly slim hopes are invested in the possibility that moving from the low-downforce tracks where Red Bull have been unusually competitive this year (scoring a ‘clean sweep’ in Canada, Belgium and Italy) will re-energise their championship prospects.

That is particularly so for Mercedes, who were off the front row in Italy for the first time since Malaysia, and Lotus, whose leading points-scorer Kimi Raikkonen left Spa and Monza empty-handed.

But this phase in the season has previously been where Red Bull have flexed their muscles. Last year Singapore began a run of four consecutive wins for Vettel. The year before he won three of the four same events.

It’s also the beginning of the championship’s gruelling final stint of flyaway races. Seven grands prix in ten weekends will see the F1 cavalcade globe-hopping from Asia to the Americas.

If Red Bull have one potential weakness, it’s reliability. Vettel lost a win at Silverstone due to a gearbox failure and both RB9s suffered transmission problems at Monza. What’s more, they will have to use the same gearboxes from Monza this weekend or face a grid penalty for changing them.

If any track is going to expose a car’s reliability problems it is likely to be Singapore. Just ask Lewis Hamilton, who was on course for victory last year until his McLaren failed. The bumpy track surface and ambient temperatures which remain high even after night falls make this an especially punishing venue.

After the previous race at the fastest track on the calendar, Singapore could not be a much greater contrast. This is a maximum downforce track with frequent braking zones.

The track has had one significant tweak for this year’s race: the turn ten chicane, dubbed the Singapore Sling, has been replaced with a simple left-handed corner. According to Fernando Alonso it will reduce lap times by around a second, which suggests the corner might be tighter and slower than images of it which have appeared on Twitter indicate. But the awkward bodge job that existed before is gone, and it’s hard to see how its replacement could fail to be an improvement.

As last year Pirelli have brought their super-soft tyre but this time they have paired it with the medium compound instead of the soft. “We?óÔéĽÔäóll likely use the super-soft for qualifying and the medium for the race,” said Lotus trackside operations director Alan Permane.

“But with the stiffness of this year?óÔéĽÔäós medium tyre being relatively similar to last year?óÔéĽÔäós soft, plus the additional knowledge the teams now have in terms of managing degradation, we would expect overtaking to be difficult at best.”

That will make Saturday’s qualifying session all the more important. Vettel’s rivals know their best chance is if at least one of them can keep him from pole position. Failing to do so, and allowing him to increase his points lead yet further, could make it a matter of when, not if, he will clinch the title.

Vettel has usually been very quick around Singapore – in addition to his 2011 and 2012 victories a 2010 win slipped through his fingers after a slip-up in qualifying allowed Fernando Alonso to get the better of him. An interesting consequence of Kimi Raikkonen’s impending arrival at Maranello is that Felipe Massa has vowed to stop propping up Alonso’s title bid. Luca di Montezemolo rebuffed such suggestions, so all eyes will be on the Ferrari pit wall should Alonso end up behind his team mate.

Ahead of this weekend the team said it would be a true test of how much they had closed the gap on Red Bull since their slump at the German and Hungarian races. Out-qualifying the RB9s may be too much to hope for, but they must put them under pressure in the race.

Sergio Perez admits the team’s developments over the final races are “most with an eye to next year”.

“Obviously, the fight at the sharp end of the championship means that the top three or four teams are still pushing hard to develop their current cars, whereas some of the others are looking more towards 2014,” he added. “That means that it?óÔéĽÔäós getting slightly harder to score good points in the remaining races.”

Team principal Eric Boullier expects Lotus to be back to their best this weekemd. “There’s no reason to think that a podium will be out of reach,” he said.

“We’ve been quite competitive on twisty circuits this year and Singapore shares a lot of Monaco’s characteristics. Romain [Grosjean] loves that type of circuit, while Kimi has always been quick in Singapore.” Likewise Mercedes believe they’ll be closer to Red Bull on this more typical track. “We expect the return to maximum downforce configuration to suit our car and we may see another shift in the competitive order between the teams,” said executive director Toto Wolff.

After Nico Hulkenberg’s brilliant drive to fifth at Monza, the question inevitably arises whether Sauber simply found a good set-up for a unique track, or have they solved some of the C32’s problems?

They were pleasantly surprised by their pace in the slow corners at Monza and there’s plenty more of those in Singapore. it will be especially interesting to keep an eye on their progress this weekend.

Paul di Resta impressed with a career-best fourth place in last year’s race but is doubtful of his chances of doing it again.

“It would be great to try and repeat that, but it?óÔéĽÔäós going to be tough given how competitive the grid is at the moment,” he said. “There?óÔéĽÔäós no doubt that the tyre change had an impact on things. Plus, a lot of the teams have caught up with us for whatever reason, whether it?óÔéĽÔäós updates or the nature of the tracks.” Third on the grid for Valtteri Bottas at the Canadian Grand Prix has been one of few high points for the team so far this year.

Last year Pastor Maldonado put his Williams on the front row, which was the prelude to a strong but unrewarded drive. “I had a very strong qualifying here last year, finishing in second place, so I feel like this layout suits my eye and I know how to squeeze every tenth out of the laptime,” he said.

Jean-Eric Vergne has had a luckless season so far with more mechanical retirements than any other driver. He was similarly unfortunate in Singapore last year, being taken out by Michael Schumacher. It’s time his luck changed.

Charles Pic is expecting a busy weekend off the track at Caterham: “Tony Fernandes is going to be in town and we have lots of sponsor and team partner activities taking place on and off track, so one of the challenges throughout the week is finding the time to step back from everything going on around us and focus on the main priority which is having as strong a weekend as we can on track.”

Max Chilton is yet to out-qualify or out-race Jules Bianchi on merit so far this year. But he won at Singapore in GP2 last year and has closed the gap on his team mate as the year has gone on. Will he finally put one over Bianchi this weekend?