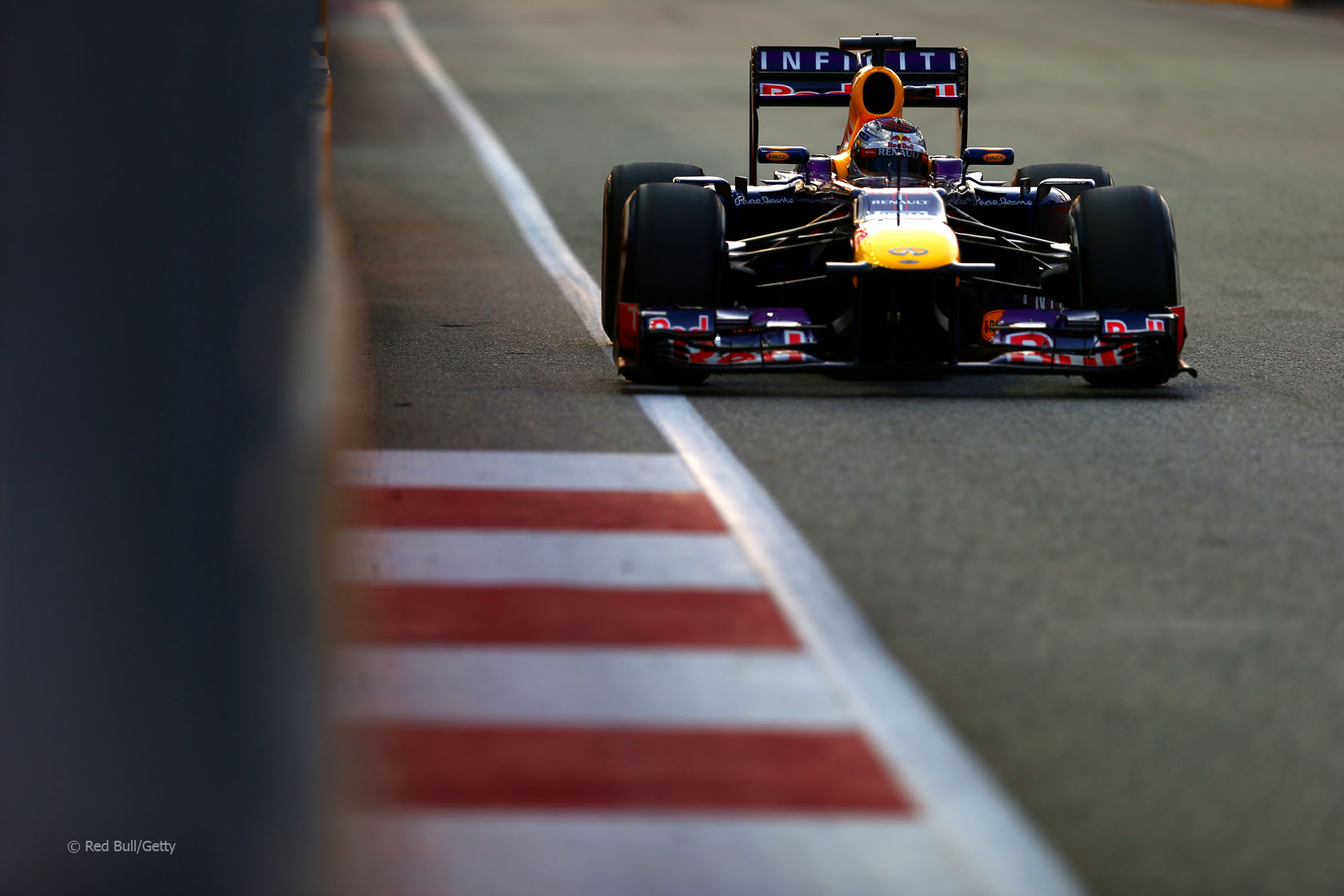 In the round-up: Sebastian Vettel mocks innuendo about Red Bull having ‘traction control’.

“Vettel, who could wrap up his fourth successive title this month, simply smiled on Thursday when asked whether he would be as dominant in Korea as in Singapore. ‘Well, since traction control will not matter so much, we may struggle a little bit more,’ he told reporters with heavy emphasis.”

“They are using something different compared to the other teams but something that is completely OK. They pass all the checks every race so it’s up to us to do a better job.”

Christian Horner: “You’d be fairly stupid to introduce traction control onto a car that is governed by a single ECU that is granted by a tender of the FIA and that is scrupulously checked by the FIA. I can’t imagine any team in the pit lane would even entertain it.”

Webber hits out at penalty (Sky)

“I saw both Mercedes on the straight when I was in the escape road. This camera angle is from that way but if you look at it from the other way, I had a good view before they started turning in – I’m in the escape road, so I can see down to the kink.”

Jenson Button: “I can’t see a reason why we can’t put the weight limit up by 10kg. It wouldn’t penalise half of the grid next season. It’s one of the easiest things to put right – and it could save a driver’s career, or make a driver’s career. It’s definitely something worth pushing for.”

Vettel’s treatment is a disgrace, says Moss (The Telegraph)

“It?óÔéĽÔäós disgraceful. Why do they do it? Because he keeps winning? He can?óÔéĽÔäót help that. He is a nice bloke. Sebastian Vettel is a jolly nice bloke.”

“If I would not race I would not be here. It would be pointless to come here and be a tourist. Right now it looks promising, so let?óÔéĽÔäós see how it goes tomorrow.”

“Sauber boss Monisha Kaltenborn has confirmed that Rubens Barrichello is a candidate for a 2014 seat.”

Alonso: “we need a lot of luck” (Ferrari)

“Fifteen days ago we were fourth fastest behind Red Bull, Lotus and Mercedes and there are very few new things on the car this weekend.”

“Mediapro has renewed its deal for the Spanish media rights to Formula One for two more years.”

#F1 According to Mercedes calculations @nico_rosberg lost 1,7 secs per lap in Singapore due to rubber stuck in frontwing after restart.

Playing with my @googleglass outside our garage in Singapore. Got my cap in both shots! #glassexplorers #throughglass pic.twitter.com/LEgiSyk7m2

Remember when F1 was about innovation and brilliant engineering? Now when one team engineers a brilliant car, or uses throttle mapping or KERS or some kind of other ingenious way to help traction instead of looking at every other team and asking “why didn?óÔéĽÔäót you think of that?” we have people saying Red Bull is cheating.
@Colossal-Squid

Jochen Rindt won the world championship on this day in 1970, just under a month after he’d been killed during practice for the Italian Grand Prix.

Jacky Ickx was in the unenviable position of being the only driver able to keep Rindt from the title when the teams arrived at Watkins Glen for the penultimate race of the year. His fourth-place finish confirmed Rindt at the posthumous champion.