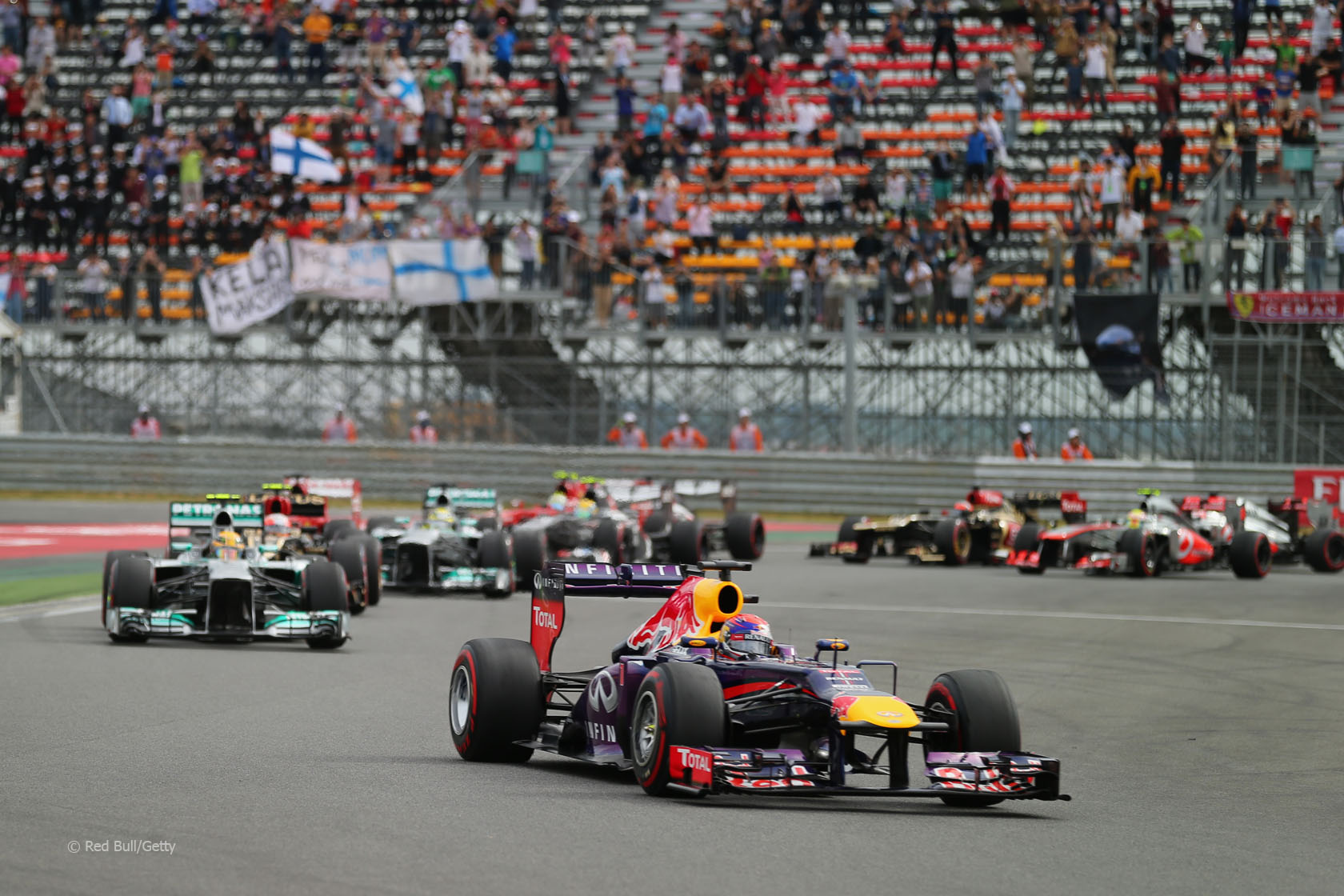 Which F1 driver was the best performer during the Korean Grand Prix weekend? Sebastian Vettel – Asserted Red Bull’s superiority on Saturday to take his 42nd career pole position. There was no skipping his second run in Q3 this time although it turned out he could have done. He might have come under more pressure from Grosjean had the Safety Car not been deployed, but with clean starts and restarts the result rarely looked in doubt.

Mark Webber – Knowing he had a ten-place grid penalty Webber sacrificed some downforce to improve his straight-line speed for the race. He was a few tenths off Vettel in Q3 which left him 13th on the grid once his sanction was applied. After dodging the Ferrari crash at the start he passed the McLarens, Maldonado and Ricciardo. But Perez’s tyre failure right in front of him forced a third pit stop, and after the restart he was taken out by Sutil.

Fernando Alonso – Made the best of his Ferrari in qualifying to line up fifth but was pessimistic about his race prospects. That turned out to be a realistic assessment as he wasn’t even able to pass Hulkenberg’s Sauber, despite his best efforts. Vied for position with Hamilton at one point and rather generously left the door open at turn four. Felipe Massa – Lost time in the first practice session with a punctured tyre which had to be replaced. In final practice he was worryingly far off Alonso’s pace on the mediums tyres but got it together in qualifying to line up behind his team mate. He had his Alonso’s quick reaction to thank for the fact his lap one blunder didn’t wipe them both out. Took a while to get past Gutierrez, eventually doing so after Rob Smedley had suggested using all his KERS at the final corner. The Safety Car helped him on his way to recovering two points for ninth.

Jenson Button – Believed he would have reached Q3 had he not lost around 0.15s behind Raikkonen, who he had waved past on his out-lap. For the second year running he was blamelessly hit at turn three on the first lap, though the consequences were less severe this time. Despite losing time with a front wing change and another delay when his pit exit light turned red at his second stop, Button took eighth with a long, 33-lap stint on medium tyres, only losing out to Rosberg three laps from home.

Sergio Perez – Pipped Button by three-thousandths of a second in Q2 but also failed to reach the final ten. Passed Maldonado twice in the first part of the race, and the stewards scrutinised his battles with Di Resta and Massa before judging both to be fair. He finished behind the latter, taking the final point. Kimi Raikkonen – Crashed at turn 18 at the end of the first practice session, but his team were able to repair his car quickly enough that his afternoon running was not seriously affected. Still not happy with the performance of the revised tyres in qualifying he could only manage tenth after a messy Q3 lap. Things got better quickly once the race started: he dodged the turn three carnage and passed Ricciardo and Alonso. A slow first stop dropped him behind the latter again but his fortuitously-timed second stop, six laps before the Safety Car appeared, gained him that place plus another on Hulkenberg. Pounced on Grosjean after the first restart to claim second, but never looked like catching Vettel.

Romain Grosjean – Continued his promising showing from Singapore and was quick enough on the medium tyres in Q1 to save a second set of super-soft tyres for the final part of qualifying, which he impressively used to split the Mercedes drivers. Passed Hamilton at the start and was set to pressure Vettel with a short second stint and long third stint before the Safety Car spoiled his plans. Paid the price for making a mistake at Raikkonen, then seems to have somewhat optimistically lobbied his team to try to have the positions reversed. The fact he was rarely within DRS range of Raikkonen at this point rather undermined his claim he was being held up.

Nico Rosberg – Wasn’t happy with his car’s balance in qualifying and was disappointed with the end result of fourth (after Webber’s penalty). He looked happier in the race and was in with a chance of a podium finish when his front wing dramatically failed. Recovered to pass Button for seventh near the end.

Lewis Hamilton – Said after qualifying he felt he’d got everything out of the car to qualify second alongside Vettel. But the race went less well: he lost out to Grosjean early on and was mystified by his loss of pace on medium tyres in the second stint. He was unlucky to have to do another lap after Rosberg first overtook him, then headed pit-wards with a broken wing. Hulkenberg passed Hamilton at the restart, which was unexpected, though he defended well against Alonso. Couldn’t crack the Sauber’s defences for fourth, though. Nico Hulkenberg – Said Q1 and Q2 went “like clockwork” but was surprised to lose four tenths of a second in Q3. His team mate actually made a better start but the turn three incident reversed their fortunes and put Hulkenberg ahead of Alonso. It was a surprise he was able to stay there, never mind pinch another place off Hamilton and keep the Mercedes driver tucked up too.

Esteban Gutierrez – Had a spin on Friday as he acclimatised to a circuit he hadn’t driven on before. Nonetheless he improved on his best qualifying position again with eighth and made a great start, passing Alonso, before losing a lot of time trying to avoid contact at turn three. Couldn’t make his way out of the midfield quickly enough to get into the points – an opportunistic lunge on Maldonado ended up costing him a position to Massa, and Perez knocked him back to 11th.

Paul di Resta – Made it beyond Q1 despite being held up by Bianchi, but trying to blame the eliminated Marussia driver for his lacklustre showing in Q2 was stretching things a bit. Disliked the car’s handling on medium tyres in the race and when he crashed out there was no ducking responsibility this time: “I have to hold my hands up and apologise to the team,” he said.

Adrian Sutil – Said his Q2 lap was “right on the limit” and was only a tenth of a second off making the cut for the top ten. After picking up front wing damage on the first lap he began to recover but lost control of his car following the Safety Car restart and crashed into Webber. Like his team mate, he also provided the necessary apologies.

Pastor Maldonado – Tested a new front wing on Friday and was pleased with the results, but didn’t use it on Saturday. He went out in Q1 and vented his displeasure at his team on Twitter, pointing out the improvement Sauber had made since their difficult start to the season. Gained nine places at the start, thanks mostly to Massa’s spin, but was always going to struggle to hang on to them. Trying to run to the end on 32-lap old tyres didn’t work out as he slipped from the points places.

Valtteri Bottas – Used the new front wing on Saturday and out-qualified Maldonado but wasn’t able to get into Q2. He was delayed at turn three at the start but made up places from there, eventually passing his team mate for 12th place. Jean-Eric Vergne – Perplexed by his car on Friday which seemed to get worse as the track conditions improved. Gained a few places at the start but soon found himself at the tail of the midfield. He was set to finish there when a severe handling problem forced him to stop.

Daniel Ricciardo – After a problematic practice he raised his game in qualifying as usual but it wasn’t enough to get the Toro Rosso into Q3. He was the only driver to start on the medium tyres and made it to lap 19 on them. He had a slow pit stop for reasons that aren’t clear, though his team were seen cleaning up the remains of a dead bird afterwards. Oddly he was forced out of the race with a familiar problem, one which also seemed to affect his team mate: “I had the same scenario here last year, when I came down to turn three with a few laps to go, I braked and the car immediately shot to the left. That time it cost me one place. Once I got out of the cockpit this time, I could see there was a mechanical problem at the front left corner.”

Charles Pic – Spent Friday practice trying to improve his car’s traction and was still not completely happy with it on Saturday morning. Out-qualified Van der Garde despite catching traffic on his best lap. Collected 14th in the race, one place shy of the 13th the team need to pass Marussia in the constructors’ championship, but earned a ten-place grid penalty for his third reprimand of the year.

Giedo van der Garde – Was happy with his car’s balance in the second practice session but, like his team mate, found the super-softs gave him a lot of understeer. Pic pipped him by a tiny margin in qualifying. A drive-through penalty in the race for forcing Bianchi wide at turn one, which dropped him to last, though he recovered to pass both the Marussias.

Jules Bianchi – Rodolfo Gonzalez drove his car in first practice, spinning into the wall early on. In qualifying he was pleased to be closer to the Caterhams but picked up a penalty – and his second reprimand of the season – for holding up Di Resta. Was preoccupied with tyre management during the race and unable to get on terms with the Caterhams. A third reprimand will also see him take a ten-place grid penalty in Japan.

Max Chilton – Said he was “really encouraged” to be close to Bianchi’s pace in qualifying. But like Bianchi he didn’t have the pace to race with the Caterhams.

Who was the best driver of the 2013 Korean Grand Prix weekend?