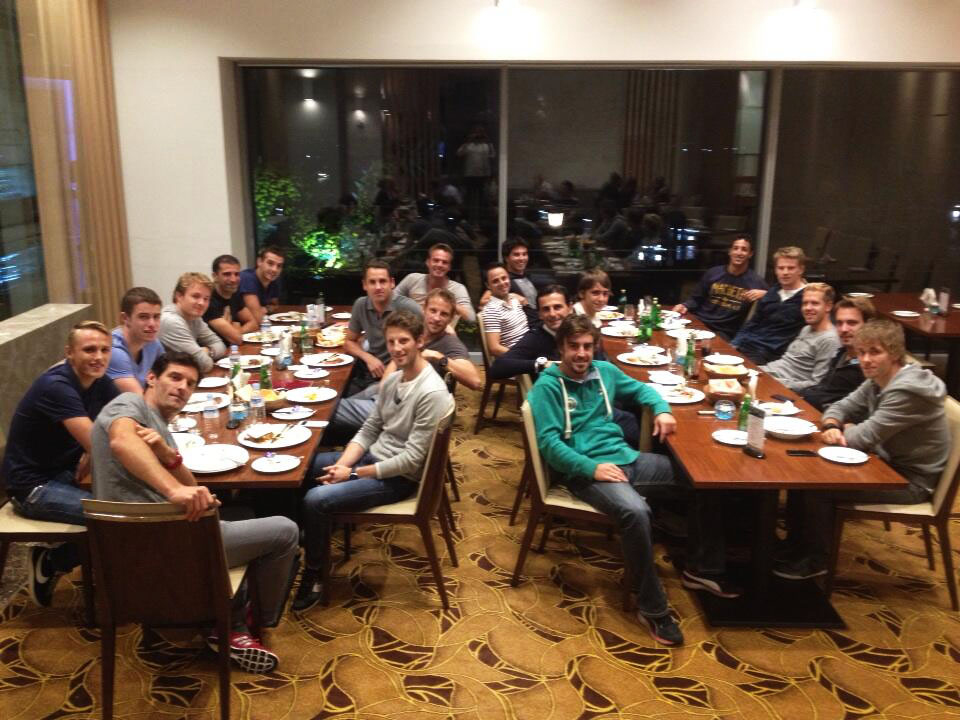 Get a glimpse behind the scenes of the Korean Grand Prix with @AnthonyFrench’s round-up of the best Tweets from the race weekend.

Mokpo welcomed drivers and teams for the fourth year, but there were continued doubts over the venue’s long-term future.

Only incident so far was watching visa-less Romain Grosjean arguing his way through immigration. He made it

#Grosjean retort to the border guard "But you just let #Kovalainen through". Border guard "He's not a racing driver!" #F1Korea

The Korean GP. What a waste of a valuable calendar slot… #F1

Pit stop practice on a great evening in Korea! Looking forward to driving the track for the first time tomorrow. pic.twitter.com/Lrf8GykT2D

View from the press room window. No view of the track itself… pic.twitter.com/nz9a3o3JnK

No @Pastormaldo at track today due to flight delays. if that were Kimi, we'd all be nodding knowingly I'm sure.

Been told that far from being a useless white elephant in the middle of nowhere, Yeongam circuit is used 280 days per year

Hamilton on Korea: "I don't really remember any of my races here". There's a ringing endorsement… #F1

Playing with my @googleglass outside our garage in Singapore. Got my cap in both shots! #glassexplorers #throughglass pic.twitter.com/LEgiSyk7m2

Spinning yarns with the boys pic.twitter.com/KJd9oussu5

Meanwhile South Korea (we hope it's South) is displaying its miltary might with eight fighter jets showing off over the track. Noisy…

Gonzalez: "I hit the wall, knocked the front wing out." Davison: "OK box this lap Rodolfo." Gonzalez: "Really sorry about this guys." #F1

An unfortunate moment for Rodolfo. He's okay but the nose needs some work

All that was left of the front of Gonzalez's nose! Woops #f1 pic.twitter.com/evcBgz7cRg

Literally tens of people poured into the circuit today to see FP1. Locals say the ticket prices are too high this year.

So much common sense coming from team managers' press conference. Can't help but think these guys should be more involved in day to day F1

Told that Hamilton wasn't as the #GPDA dinner because he ate at the track and then hit the gym. Kimi also conspicuous in his absence.

Not all too many fans on the grandstand yet. But the Swiss flag is flying high! pic.twitter.com/44VR9sW5cd

Official Thursday crowd figures for Thursday at Mokpo claim 20,000. Said with a straight face too !! #f1

Some tools are passed down from generation &are older than Chris &Tom! old v new ratchet here but it does same job! pic.twitter.com/57oIu3iZdJ

Each member of race team have their own individually moulded earplugs with their name on #WilliamsPaddockTour pic.twitter.com/ZbD4oa9Vrg

On the left as you walk in we have a specialist KERS room which is fully insulated where all batteries are worked on pic.twitter.com/nnd9NxlQRM

Rennie to Webber: "Mark for your information there's no 50 metre board at turn three, it will be there for qualifying." #F1

First run for @JensonButton this morning, straight out at the start of #FP3 on the Prime… #KoreanGP pic.twitter.com/qws79NmKyv

Lot's of things have being said this week about a possible F1 return. The truth is: " if there is an opportunity, I 'm in,"

"I got traffic in the last sector," Di Resta says, "that was unbelievable." He's told Force India have complained to the FIA. #F1

Good lap from Hulkenberg for fourth and Gutierrez in too pushing both McLarens out! #F1

Just one question from the assembled journos for the top three post quali. Says it all really!

#Kimi's turn to entertain the media next; if they can escape that icy gaze of course… #F1 #KoreanGP pic.twitter.com/4P4MkOra3V

Lovely evening here in Korea so will be interesting to see if this Typhoon comes into play tomorrow pic.twitter.com/u4edk1o9Nf

The downside of Jenson's new ultra lightweight suit is it looks like toilet roll. I have requested dogs or flowers be added to design! #F1

Don't even think it..! There is not space for taxi anymore..! Better both finish the race ;)! Good luck @AussieGrit pic.twitter.com/YbcV2McJnQ

While Vettel sprinted off into a comfortable lead never to be challenged a hectic race developed reigned behind him. Nico Hulkenberg starred, rebuffing attacks from three world champions and two multiple race-winners on his way to a valuable fourth place for Sauber.

A good turnout here down the main straight. Let's hope we can give them some #MokpoMagic pic.twitter.com/xoe102mAuN

"Remember it's a long race, you don't have to do it all at turn one," Rennie adds to Webber. #F1

"Jenson we need to box this lap for a front wing, it's affecting the brake temperatures." #F1

Bonnington told Hamilton: "Target minus one so you can push, push." Hamilton: "You're confusing the hell out of me, man." #F1

Odd incident in the Toro Rosso pit… I saw a dead bird being scooped up after Daniel Ricciardo's pitstop. Sacrifice to the Pirelli gods?

Front wing failure for @nico_rosberg requires a nose change before he returns to action on lap 28, a 20s loss in all

Smedley to Massa: "This is quite bizarre, there was a car on the track, no message. Safety Car deployed." #F1

For a moment there I thought @HRTF1Team were back in #F1.

what a race of #KoreaHulk. he is simply amazing! defending P4 against HAM. 7 laps to go. #KoreaGP

Why did Sergio's tyre blow up? Why was safety so bad? Why was the fire truck on the track? Why was Webber's car allowed to burn for so long?

Pat tells Grosjean: "We'll talk about this in the office afterwards but for now big *** smile on the podium, big *** smile." #F1

To all asking about the strategy decisions with @LewisHamilton, pitting early would have committed us to a much slower 3.stop strategy…

Was a good race, good recover from 18th to 9th in the 1st lap but finally after the SC no pace to fight for the point…

Arrghhh… Have settled down a little now. Brake failure 3 laps from the end. Cost us a solid 9th today. What can I say. We'll bounce back!