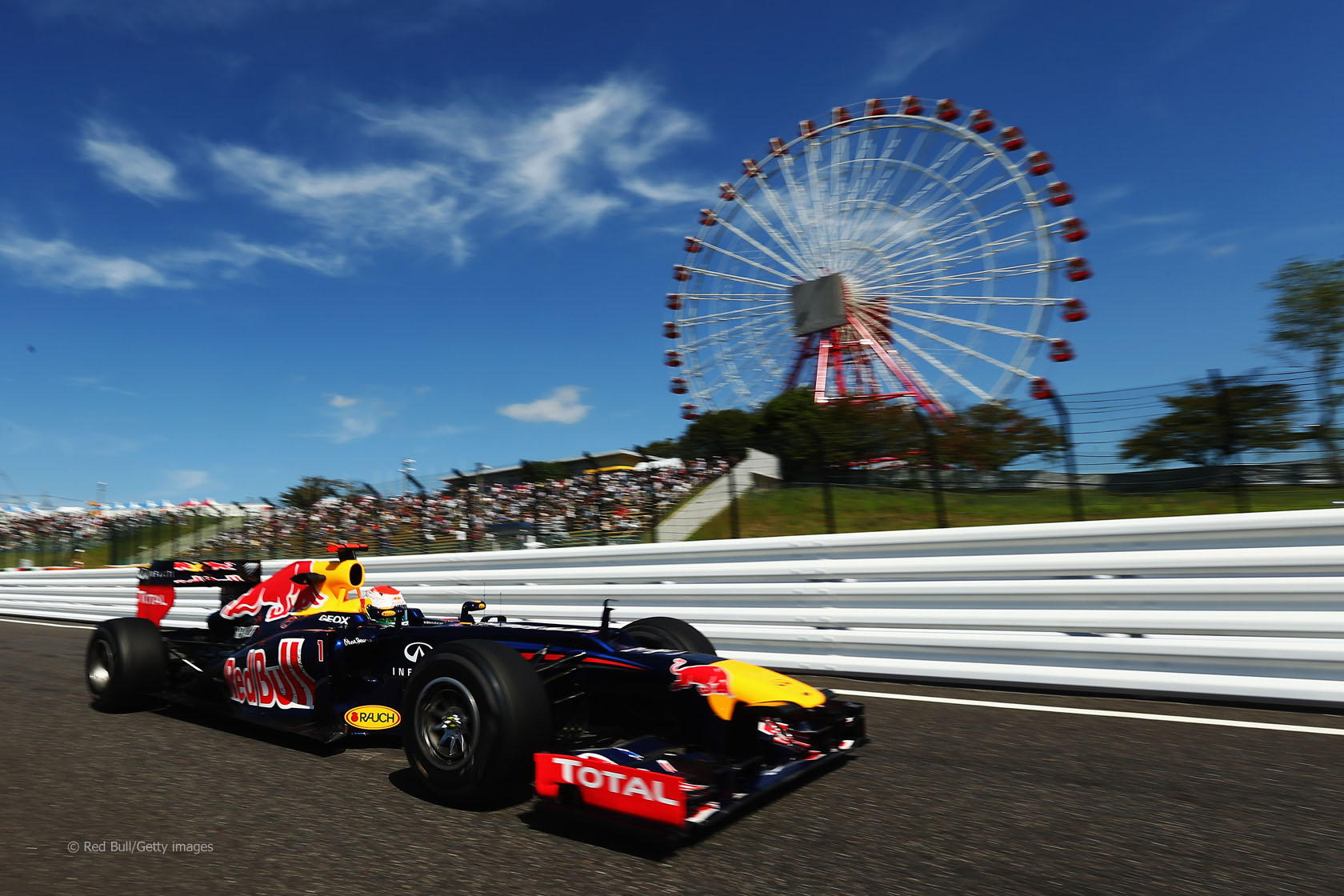 Sebastian Vettel can clinch the world championship this weekend at a circuit where his track record is nothing short of daunting.

In four appearances at Suzuka Vettel has set pole position every time and racked up three wins. Arguably he only missed out in 2011 because settling for third place guaranteed his second championship title.

Vettel heads into this weekend’s race in the kind of irresistible form we’ve come to expect from him at this point in the season. A potential fifth win in a row beckons this weekend – something only achieved by five drivers in F1 history.

Suzuka’s medium-to-high speed corners tend to suit the Red Bull and like most drivers Vettel relishes the layout: “You have to see the ?óÔéĽ?ŁS?óÔéĽÔäó Curves as connected, you drive through them in a rhythm at around 240 kph, always on the limit and you can feel the centrifugal forces in both directions,” he explains. “There are extreme bumps too that pull on your neck like hell.”

“Spoon Curve is extremely fast and has two apexes. You have to be brave to get on the throttle early through here.

“Then there is a long straight, leading into the ultra-fast left kink which is 130R. You go flat out, but it doesn?óÔéĽÔäót allow for any errors or technical issues since the run-off area here is not great. Finally, Casio chicane: you drive in second gear and the apex is very hard to see.”

The tyres take a pounding around one of the toughest tracks of the year in terms of wear rates. Pirelli will bring their hardest tyre combination for this weekend’s race.

The possibility of clinching the championship this weekend is unlikely to put the well-drilled Red Bull operation off its game.

Mark Webber would no doubt especially enjoy putting one over his team mate at a proper, old-school circuit like Suzuka if the opportunity arose. He had similarly wretched luck in this race last year as he did at Korea last weekend, being knocked into a spin by Romain Grosjean at the first corner.

Fernando Alonso may be the closest driver to Vettel in the championship but he needs dramatic improvements from his car if he’s to do anything about his rival’s 77-point lead.

Although Jenson Button enjoys a close affinity with Japanese culture and won this race in 2011 the demanding circuit is likely to expose the deficiencies of his MP4-28 in the most ruthless fashion.

We’ve seen Kimi Raikkonen struggle in qualifying in recent races and he has admitted he’s not been able to get as much out of the car over a single lap as he could before the tyres were changed. It hasn’t stopped him picking up podium finishes in the last two races, however.

Executive director Toto Wolff is optimistic about his team;s chances this weekend based on their form in Korea. “Our car was possibly the quickest of all in sector two last weekend, which contained all the medium and high-speed corners,” he said.

“This is promising for Suzuka, where nearly two thirds of the corners are taken in fourth gear or higher, and should see our car perform well on this fantastic track.” After Nico Hulkenberg’s excellent effort in Korea moved the team ahead of Toro Rosso in the constructors’ championship, could they now go one better and overhaul Force India as well? Sauber would have to at least double their haul of 31 points but they’ve taken 23 off their rivals in the last three races.

Sauber’s chances of claiming a late sixth in the championship may well depend on whether Esteban Gutierrez can finally get his first points on the board.

Kimiya Sato will be the team’s reserve driver this weekend.

The VJM06’s handling looked very edgy in Korea and both drivers lost control of their cars in the race. It’s a tough situation for the team who have scored just three points since the tyres were changed in Hungary.

Pastor Maldonado has voiced his displeasure at Williams’ uncompetitive 2013 campaign since the last race, saying he’d rather stay home than suffer a similar season again next year.

Toro Rosso were baffled by their lack of form in Korea and adding insult to injury both cars were afflicted with braking problems at the end of the race.

Heikki Kovalainen will be back at the wheel during the first practice session. A ten-place grid penalty for Charles Pic almost guarantees he will start from the back row.

Like Pic, Jules Bianchi also has a ten-place grid penalty. This is likely to be a tough weekend for Marussia as neither of their drivers have prior experience at one of the toughest tracks on the calendar.