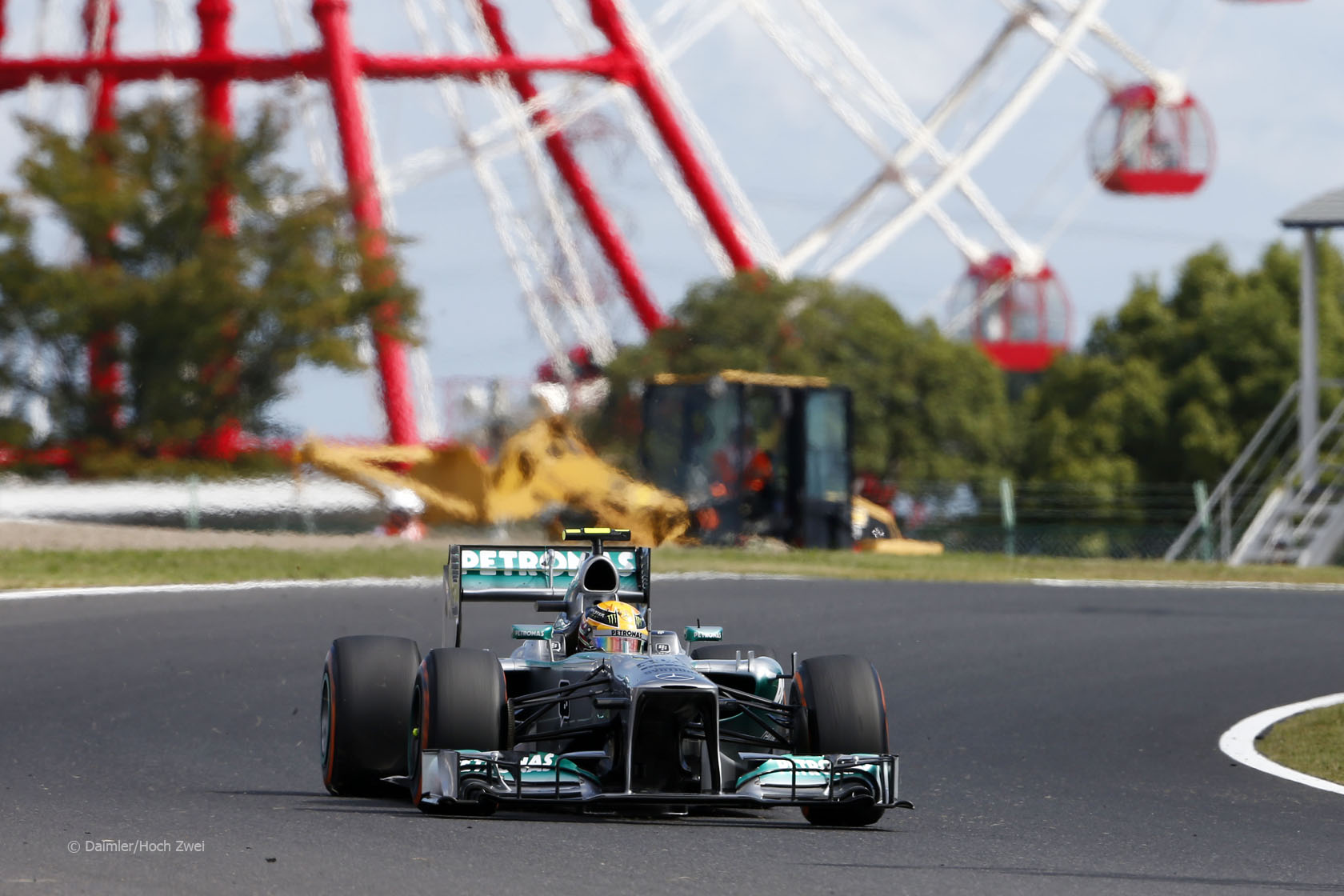 Red Bull hold the upper hand in Japan but Nico Rosberg is hopeful that Mercedes can keep them honest this weekend.

“I hope we can annoy the Red Bulls a little bit,” said Rosberg after Friday’s two practice sessions.

But the day’s running didn’t go entirely to plan for Mercedes as Ross Brawn explained: “Both drivers suffered flat spots with the tyres, which forced us to adapt our programme, but they were still able to complete enough running to get a good feel for each compound and how it’s working at this circuit.”

Lewis Hamilton was given a lap time target of mid-1’40s when he began his longest stint on the hard tyres. Then after being told he was three tenths off Fernando Alonso’s pace he lowered his times into the 1’39s.

Alonso, who was following him on the track and also on the hard tyres, couldn’t match that pace. He reported his tyres were “zero” and stayed out until he’d hit the ‘cliff’ of tyre performance and his lap times had risen above 1’44.

Team mate Felipe Massa also felt the cliff coming but stayed out for one more lap in the 1’41s before pitting. Ferrari, it seems, have a weakness on race pace comparable to what we saw in Korea last week.

But there is some cause for optimism. Rob Smedley told Massa during the session his pace was good “for the cars that we’ll be with on Sunday”.

Alonso also believes there is more time in the car. “We definitely lost a few extra tenths from the first lap,” he said. “We hope to get a clean lap tomorrow and to be ahead of those cars, such as the Toro Rossos and the McLarens that we cannot have in front of us, as happened today.” Lotus’s preparations were compromised by Kimi Raikkonen going off the track for the second Friday in a row. “We lost a reasonable amount of long run data collection as a result of Kimi?óÔéĽÔäós spin,” said trackside operations director Alan Permane, “meaning Romain?óÔéĽÔäós programme was modified slightly and we might look at doing some race simulation work during tomorrow?óÔéĽÔäós practice”.

McLaren were in a similar position because of Sergio Perez’s crash. Jenson Button’s race engineer Dave Robson told him his pace was “strong compared to our competitors” before telling him to target laps around 1’40.5, which he fell short of by around a tenth.

Button, however, is wary of the change in weather conditions which is expected. “I believe there?óÔéĽÔäós a cooler weather front coming in for tomorrow,” he said, “so we need to be careful about the direction we take with the set-up to best cope with it”.

“We found a good balance on the [hard] tyre,” added Button, “but still need to do some work with the [medium], because we didn?óÔéĽÔäót gain too much going from the harder tyre to the softer one”.

Pirelli believe the medium tyre to be around half a second faster than the hard. Red Bull did most of their race fuel running on the softer tyre, indicating they may feel confident enough to run it for longer in the race. Recent evidence suggests that Lotus should also be able to go down this root if today’s setbacks haven’t compromised them too badly.

Sauber appear to have picked up where they left off in Korea. Nico Hulkenberg is confident of getting into Q3 again but it will be a stern test for Esteban Gutierrez to be close to his team mate in his first qualifying session at Suzuka.

Here’s all the data for the Japanese Grand Prix: