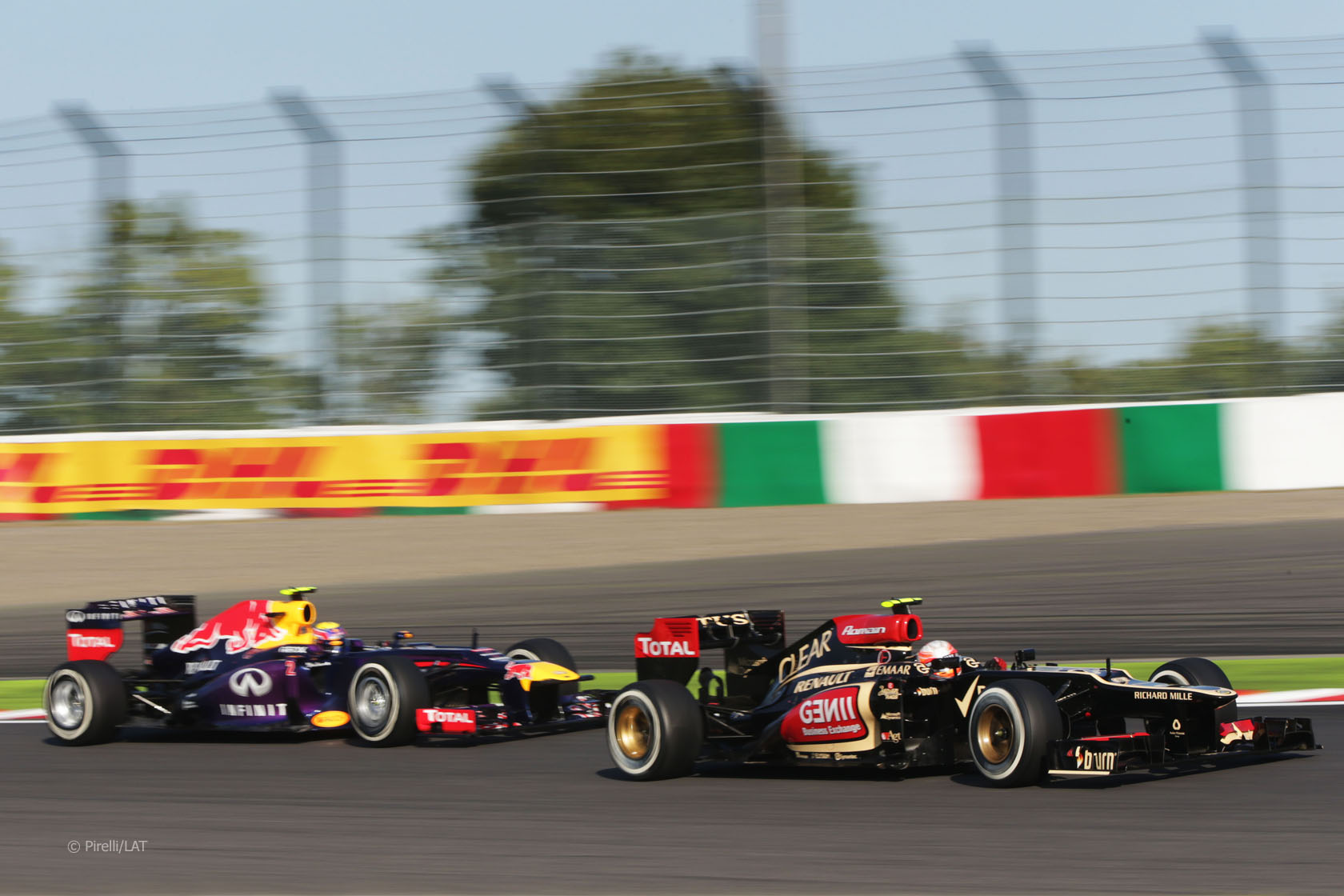 But looking at the data it’s clear to see why Red Bull chose the strategies they did – and why Vettel was always likely to come out on top given how the race unfolded behind them.

Red Bull pitted Webber for the first time on lap 11, three laps before his team mate came in. As their leading driver at the time Webber would have expected to pit first as that gave him the advantage of the ‘undercut’ and potentially the opportunity to leapfrog leader Romain Grosjean.

Team principal Christian Horner said it was necessary to bring Webber in at this time because his tyres were beginning to fade. This is consistent with expectations: Vettel has usually been able to make his tyres last longer than Webber has this year. In dry races where both started on the same compound, Webber had to pit first eight times out of ten.

Webber’s lap times also indicate his tyres were starting to go off. They were beginning to rise relative to his team mate even as the gap between him and Grosjean increased. On lap 11, as he headed for the pits, he lost six tenths of a second to Grosjean in the first two sectors.

Webber left the pits on a set of hard tyres with 42 laps remaining. He would have needed to do two stints averaging 21 laps each to make it to the end of the race. Vettel was able to manage a 23-lap stint on hards which indicates Webber could have handled this, even taking into account how he was punishing his tyres more severely than Vettel. Whether he could have done so and been quick enough to pressurise Grosjean is a matter of conjecture.

But Red Bull had an opportunity which, in the normal course of things, wouldn’t have been available to them. They could bring Webber in for an early second stop and commit to a three-stopper.

This was possible because a large gap had opened up behind their drivers. Mercedes had dropped of contention with Lewis Hamilton taking damage on the first lap – ironically due to contact with Vettel – and Nico Rosberg earning a drive-through penalty for being released from his pit box too soon.

On top of that Felipe Massa had held up his team mate (despite being ordered to wave him past) and Alonso had been further delayed by Daniel Ricciardo, who started on mediums and ran long, and Nico Hulkenberg, who jumped both Ferraris with an early pit stop.

The upshot of this was that Red Bull could bring in one of their drivers early and convert to a three-stopper without the slightest danger of them losing time in traffic during the next stint.

This had an obvious appeal on the Red Bull pit wall. When a team is attacking one rival car with both of theirs the best way of ensuring at least one of their drivers gets ahead is to put them on alternate strategies. This is what Lotus tried to do to Vettel in Germany, bringing Grosjean in before Vettel while leaving Raikkonen out.

The next decision Red Bull faced was which of their drivers to put on the three-stopper. Logically it would be the one who had pitted earliest the first time around and who was hardest on his tyres: Webber. With the prospect of passing Grosjean via the undercut diminishing Red Bull knew they would have to pass him on the track. Having fresher tyres would make that easier and arguably it should have helped Webber more than Vettel.

When Vettel caught Grosjean his tyres were eight laps newer and of the same compound; when Webber caught the Lotus his tyres were up to twelve laps newer (less any further distance he had covered on them in qualifying) and he was on the faster medium compound. Yet Vettel passed Grosjean after a single lap while Webber took six to force his way by.

Before catching Grosjean, Webber took almost two seconds out of Vettel’s lead in as many laps. If he’d cleared the Lotus as quickly as Vettel did it appears he would have been able to catch his team mate and potentially pass him, though Webber is sceptical about that.

Ultimately their strategies helped both drivers pass Grosjean. But what made the difference and allowed Vettel to come out on top was his raw pace.

Vettel qualified a tenth of a second slower than Webber despite losing KERS in Q3 which cost him four to five tenths of a second. That suggests he had around three tenths in hand over Webber, a supposition backed up by their lap times from Q2, when both drivers had working KERS.

If Webber had been three-tenths of a second quicker he would have had a chance to come out ahead of Vettel at the end of his third stint. He certainly wouldn’t have been stuck behind Grosjean.

Given Vettel’s performance advantage, whatever strategies Red Bull chose he was always going to make that count once he got into free air. What probably did for Webber’s chances of beating him was the confluence of events that allowed Red Bull to split their drivers’ strategies, which was their best chance of beating Lotus.