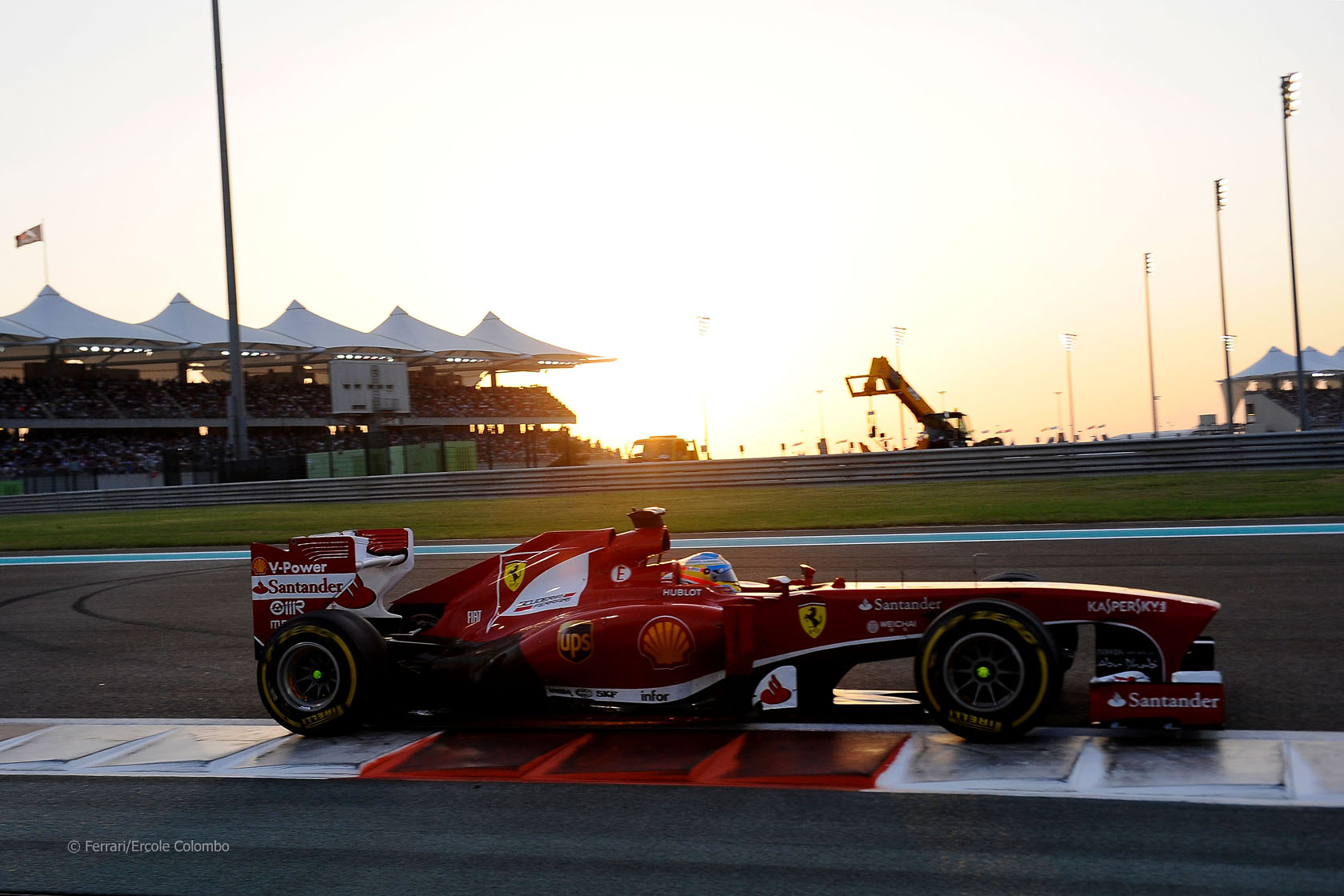 In the round-up: Fernando Alonso had medical checks on his back after his high-speed trip across the kerbs following yesterday’s Abu Dhabi Grand Prix.

“Ferrari’s Fernando Alonso has been cleared following a check on his back after bouncing over kerbs at high speed in the Abu Dhabi Grand Prix.”

“It was a racing incident and if he had not gone on the outside [of the track] like he did, we would have had a big crash.”

“Mansoor Ijaz, chairman of a consortium of private investors buying a 35 percent stake in the team, told reporters at the Abu Dhabi Grand Prix that talks with the 2007 world champion’s manager had prevented a potential walkout.”

Newey meets with Ainslie (The Telegraph)

“Red Bull are likely to face renewed speculation regarding the long-term intentions of their star designer Adrian Newey after he met up with Great Britain?óÔéĽÔäós four-time Olympic champion Sir Ben Ainslie in the team?óÔéĽÔäós paddock home after qualifying in Abu Dhabi on Saturday.”

Vettel on doing more doughnuts in Abu Dhabi: “Entering the sort of stadium, I thought it was a very, very good spot, I made sure there was nobody around and I was far away from the lines. I think if we are in a position to think about that then obviously it?óÔéĽÔäós very special because it means we had a very, very good result in the race. So I think there?óÔéĽÔäós a lot of work before we get to decide whether we can do it again or not.”

“Always there are some downs in your career and there was the year at McLaren in which I was not good enough to compete for the championship at the end. In Ferrari I think there were a couple of races where I was not in good shape physically and mentally – in 2011 especially in the first part of the season I had big problems with one leg, I remember I was suffering a lot in the races.”

Monisha Kaltenborn: “I simply think 22 races in a year will be too much, not just from a professional point of view but from a personal view as well.”

“BE: Some people used to use lead as ballast. One team that did it a lot were Brabham.
MM: That?óÔéĽÔäós Brabham as in the team that you happened to own at the time, Bernie?”

“There is a very small, twisted channel on the outside of the diffuser, in a position very difficult to find.”

Also fab that GP2 champ gets a Pirelli F1 test and that the 200k euro cheque for GP3 champion went to Regalia as Kvyat already in F1.

There’s been a lot of frustration in the comments recently about drivers abusing track limits:

I’m a bit tired of the stewards now. They had been okay this season with punishing off the track moments. People complained about Grosjean getting punished at Hungary but I thought they were bang on; if you need to go off the track to pass then it isn?óÔéĽÔäót much of an overtake anyway.

But since India the stewards/Whiting have just acted without any logic. They ignored people exceeding the track limits throughout India, then before qualifying they said they would look at anyone who went wide at the last corner ?óÔéĽÔÇŁ why the last corner and no others is beyond me- and yet they did absolutely nothing about it so were yet again inconsistent.

And finally, they ignored Alonso exceeding the track limits and Sutil doing the same. There?óÔéĽÔäós just no logic or consistency. It was also pretty frustrating how they waited until after the race to make the decision; say they had found Alonso guilty then it would have been really unfair to punish him with a time penalty when they could have immediately told him to just give the position back.
Steph (@Stephanief1990)

Toyota announced they were quitting Formula One four years ago today, three days after the season finale in Abu Dhabi. The team had built a chassis for the 2010 season but did not race it.

Since then they have returned to competition in the World Endurance Championship and have won four of the 14 races they have contested. However their only win so far this year, on home ground in Japan, came during a washout in Fuji where only 16 laps were completed, all behind the Safety Car.

56 comments on “Alonso given OK following hospital check on back”