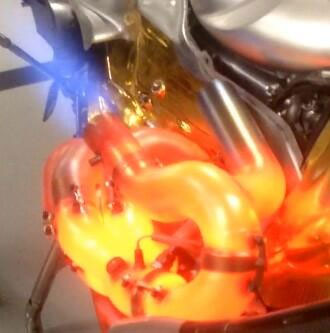 Get a glimpse behind the scenes at the last race of 2013 as F1 said farewell to Mark Webber and V8 engines, and Felipe Massa parted with Ferrari at his home event.

@AnthyonFrench rounds up the best Tweets from the race weekend.

Warm weather greeted the teams on the final media day of the year, but rainclouds were brewing.

Interlagos – in the rain #F1 pic.twitter.com/1FFTul1kYL

The rain hit on Friday and Nico Rosberg led the way in two saturated practice sessions. The shortage of on-track action meant teams and drivers had to find ways to entertain themselves throughout the day.

So at $100 and more than 100 journalists Embratel has made a tidy 10k for shonky internet that doesn’t work. Might work tomorrow. Apparently

Happy 59th to the big man at Mercedes, Ross Brawn – doesn't look a day over…

Hey guys. Sitting out this morning as @Dany_Kvyat is taking over. Want to wish @AussieGrit the very best for his last F1 race this weekend!

Not much action here as we only get 3 sets of wet tyres per driver for the weekend…And we have a feeling we might need them! #FP2

Kovalainen tiptoeing around the wet middle sector. Pic told "it looks like the rain is slowing" so Caterham will do a run on intermediates.

Rain is really not what we wanted for this session as we've also brought 2 sets of 2014 prototypes per driver. They are slick tyres…. #F1

Are we seeing things, or did Seb just head out on slicks… time for a few practice pirouettes perhaps?! #F1 #BrazilianGP #FP1

Slight mis-turn from @EstebanGtz as he walks into our hospitality only to give a "oops sorry" and swiftly head out! Next door to Sauber here

Every time a car goes past this lot go totally crazy! Forget the rain, #F1 is always hot stuff in Brazil #GreatFans pic.twitter.com/VIKIV2MXU6

Rosberg asks: "Traffic in relation?" He's told Ross Brawn says "you're the only one dumb enough to be out there at the moment!" #F1

5 laps for Paul before he returns his boat to the pier… or his car to the pits. Either of the two, it's hard to tell. #FeelTheForce

Not a huge amount happening on track at the mo as its still wet. How to keep yourself focused??Reaction time training pic.twitter.com/dTvyXSD7zl

Had to abort our post-P2 fire up with max revs (instead usual "lo-revs" limiter) to avoid killing visitors ears :) #LastV8Race #MakeItRoar

First time I have driven Interlagos and its a fantastic short and technical circuit. Have only driven it in heavy rain but loved it! 👍

Hopefully some better weather tomorrow, want to get some proper laps around here!

The rain remained and Mark Webber was quickest in final practice, but the rain failed to keep Sebastian Vettel from another pole position after a length mid-session stoppage.

The FIA also released the following image reminding drivers of the rules regarding the pit entry line. #F1 pic.twitter.com/H1hklRnlvj

Both drivers hop out for now; unanimous conclusion from the install laps – "Track conditions aren't great" – thanks chaps… #F1 #FP3

Ooof!!! Big slide for @GvanderGarde but he hangs on and continues on run 2

@H_Kovalainen acknowledges a mistake on his latest lap, so comes back for another set of boots. Uggs?

Word from the pitwall to @RGrosjean is that this is 'quite big' rain. Can someone give us a more descriptive term please?

While we wait our ever so lovely catering crew drops by with some coffee for the boys. pic.twitter.com/eZmGpuMMI6

Pretty tricky out there this afternoon, good first and last sector and had a huge moment out of turn 3. Tomorrow is the day!

Rocquelin: "OK Sebastian what do you want to do?" Vettel: "Intermediates." #F1

Vettel extended his phenomenal run of victories and Red Bull took a one-two despite a series of problems in the pits. Webber ended his F1 career in fine style with second place after a stirring battle with Alonso.

Drivers have been given a further reminder about crossing the white pit lane entry line during the race: #F1 pic.twitter.com/r9IRjwvCV7

The stars of #F1 2013: Missing one legendary face of course, but he's here in spirit… #GetWellSoonKimi #F1 pic.twitter.com/qK7tjE8L6s

Thank you V8s…..its been a blast. #feeltheforce.

At one stage @Pastormaldo's dad was inside Lotus talking to E Boullier, at the same time his manager was outside talking to Monisha K

Mark's side of the garage before today's race A big thank you from everyone on The Team! #BrazilianGP pic.twitter.com/bnuWj4lnCw

Felipe Massa's pit crew applauds the Brazilian as he drives from the Ferrari garage for the last time #F1 pic.twitter.com/Xt4YthcheK

Stay safe guys. And thanks for the sport, the drama, the laughs, the excitement. Wish you all a calm relaxing and fulfilling "off season".

Heated visor to prevent misting on webbers helmet. Hence the wire leading to it

Rennie: "Just enjoy today." Webber: "Not easy getting in the car the last time." #F1

Grosjean said "what is this seventh gear?" just before his Renault V8 went pop. #F1

Vergne told: "Careful on entries, you're braking a lot later than Daniel." #F1

Word is, it was a BIG engine failure. A @RenaultSportF1 V8 wanting to say a notable goodbye from F1. Thanks for all the great races

L44 Button and Massa pit. Massa said "it's raining a bit" and Smedley said "stay out" but obviously he didn't .#F1

Fastest first sector for Bottas there. Great if you finish the lap. #Oops

Vettel in the pits and its a slow stop – Webber in and is briefly delayed. Alonso stops too and stays behind Webber. #F1

The stewards investigated the Vergne/Maldonado incident but took no action, saying neither was "wholly or predominately to blame". #F1

We don't forget that this is only P2 and Red Bull beat us comprehensively. But we will savour this one. So much hard work has gone into it

Does he care? No. pic.twitter.com/trR9sMA1G9

Webber to Alonso on the podium: 'It was good to race you for the last time' Two proper Racers. #F1

I"m a big fan of Vettel, though I believe today he waisted an opportunity to give back to Webber the victory he stolen ito him n Malesia…

Martin Whitmarsh, as the boys cross the line at the #BrazilianGP. Looks a bit happier, doesn't he?! #BelieveInMcLaren pic.twitter.com/tL9kzWiAvg

Learning to lose? Done. What's coming up next?

As we leave Interlagos, and bid farewell to F1 2013, it's now pissing down! Typical.

What a race. Was sad for Valtteri & Lewis, unnecessary & unintentional. BUT I didn't swear. Promise Mum.

We gave the @RenaultSportF1 V8 Engine a bloody good send off tonight. Limiter taken off, she. was. screaming! #F1 pic.twitter.com/grsXLXtcih