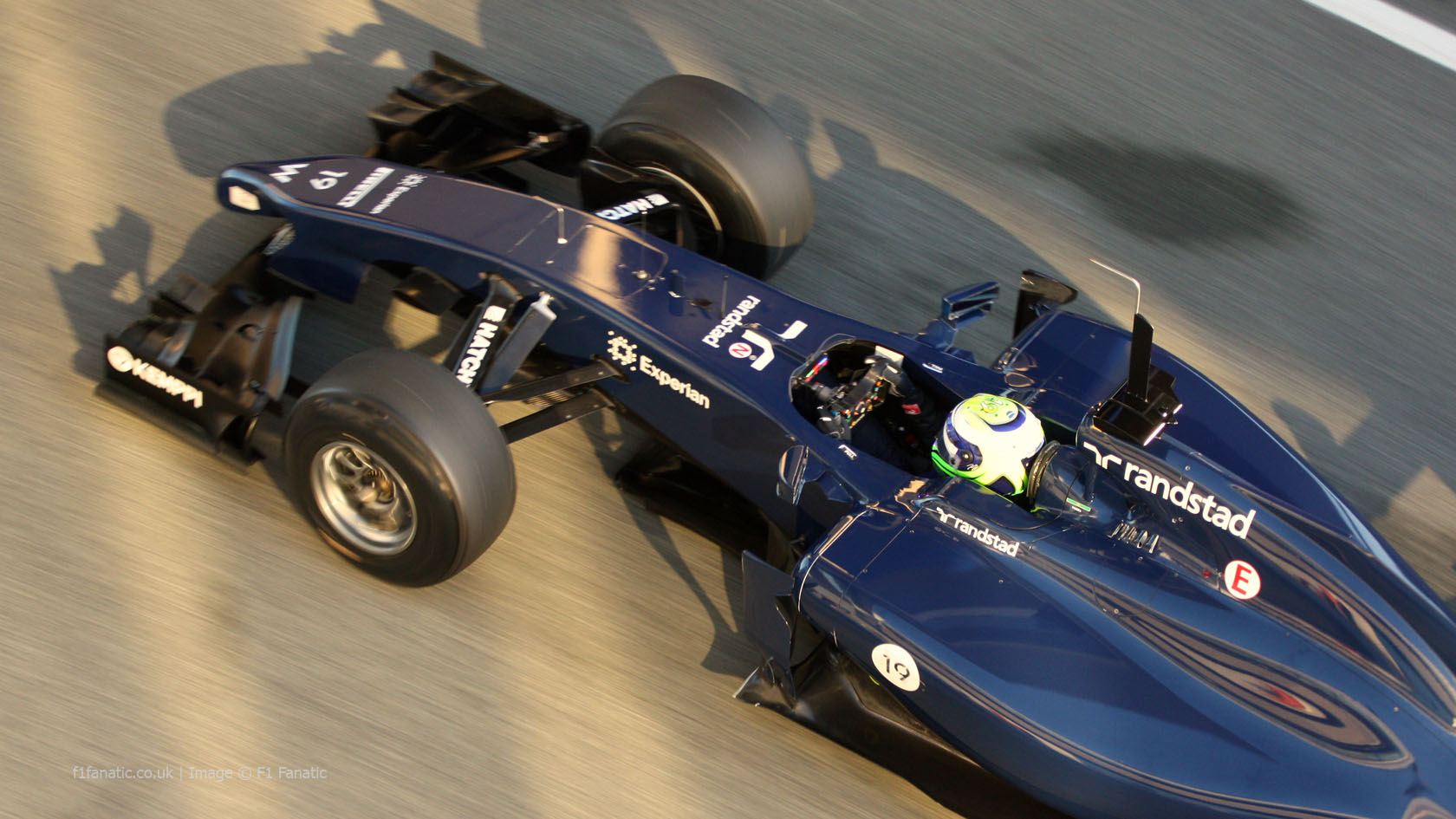 Felipe Massa finished his first test for Williams on a high by setting the fastest time on the final day of running.

Massa clocked a 1’28.226 to take the top spot on what was a damp day of testing. After limited running for many cars this week, the majority of teams managed to record a much greater number of laps over the course of the day.

Caterham too had only limited running earlier in the week, so they will have been pleased to achieved a healthy morning run with Kobayashi logging 54 laps in the damp conditions ?óÔéĽÔÇŁ albeit over six seconds off the ultimate pace.

After completing 97 laps on Wednesday, Nico Rosberg wasted no time in putting in a reasonable sequence of laps on the intermediate tyre, clocking a 1?óÔéĽÔäó38.157 to be comfortably fastest at the end of the first hour.

Rosberg was joined by fellow Mercedes-engined drivers Kevin Magnussen in the McLaren and Felipe Massa?óÔéĽÔäós Williams, who together provided the majority of the early running. But it was the Mercedes who seemed the most comfortable, with Rosberg running quicker and far longer than rest of the field, amassing a highly impressive 91 laps by lunchtime ?óÔéĽÔÇŁ double the mileage of any other driver – completing a race simulation on the way.

Just as the on-track action died down around the mid-way point of the day, Fernando Alonso took to the circuit and immediately delivered the quickest time of the day with a 1?óÔéĽÔäó35.334 ?óÔéĽÔÇŁ still on the intermediate tyres. A long run followed for the Ferrari, during which Alonso lapped closer to the Mercedes’ earlier pace.

While the rain had long since stopped, the cloud cover and cool temperatures meant that lap times began to improve ?óÔéĽÔÇŁ but not tumble ?óÔéĽÔÇŁ as the cars began their afternoon running. Force India?óÔéĽÔäós reserve driver Daniel Juncadella took to the track and lowered the benchmark to a 1?óÔéĽÔäó31.719 to make it an all-Mercedes engined top three

Following Rosberg?óÔéĽÔäós productive morning run, Mercedes decided to hand the W05 over to Lewis Hamilton for the afternoon. Alonso rejoined the track in the F14 T and began to exchange fastest laps with Juncadella on a track that seemed to be getting quicker and quicker.

A largely red flag-free session was spoiled late in the day by a series of incidents. Adrian Sutil repeated his spin from yesterday but this time without hitting anything, going off backwards at the chicane.

Magnussen caused a pair of red flags, the first after a spin at the chicane and the second leading to contact with the barriers which damaged the front of the car. Elsewhere on the track at the same time Daniil Kvyat’s first day of action in the Toro Rosso ended with a technical fault after just seven laps.

In between the various interruptions Massa took advantage of the steadily improving track to put his Williams at the top of the times sheets. But with the track conditions still far from yesterday’s peak he was five seconds off the best seen this week.