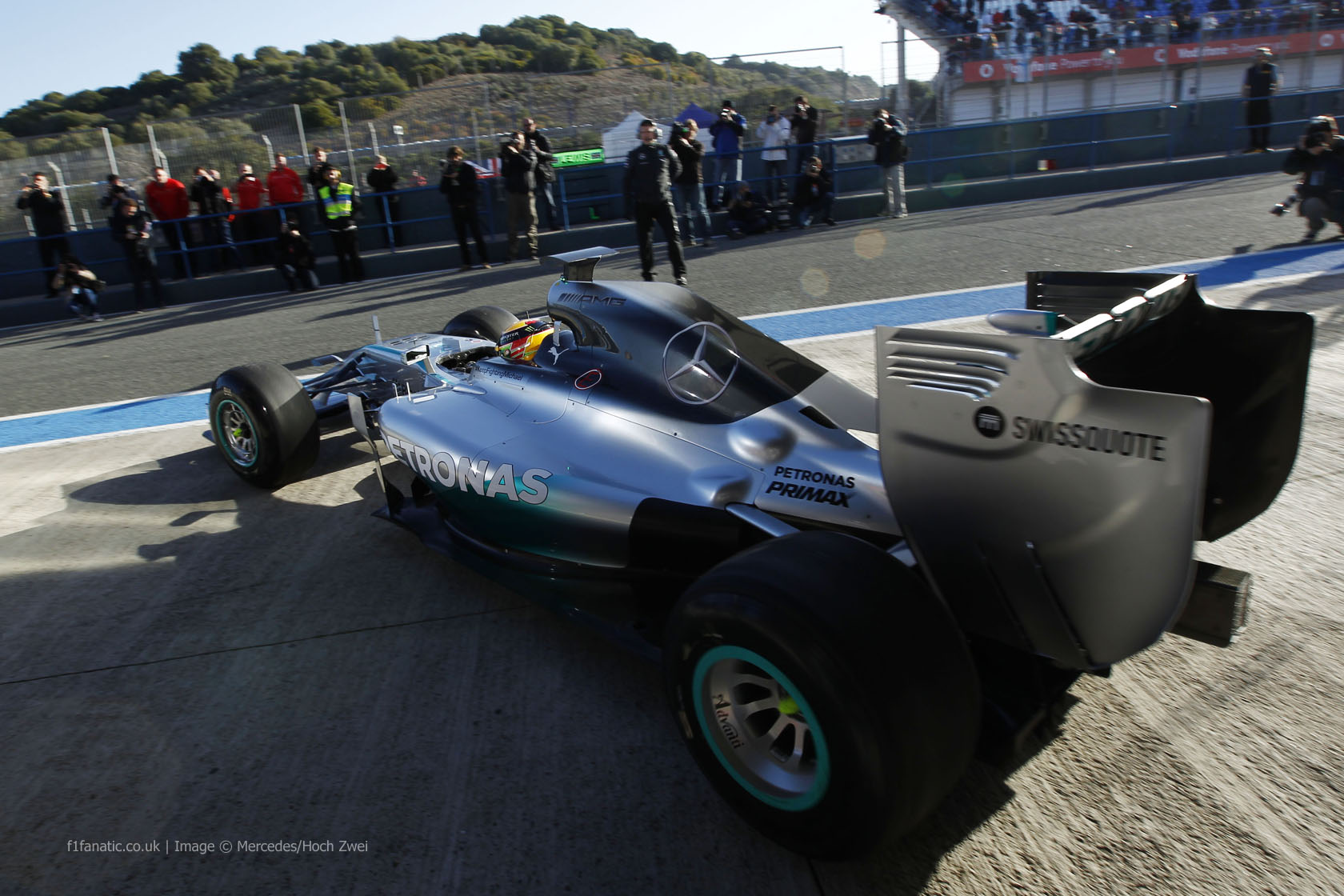 In the round-up: Mercedes say F1’s new V6 turbos, which were expected to produce around 600bhp, are actually giving closer to 700bhp.

Mercedes’s Andy Cowell says the approximate output of the new V6 turbo engines is around 700ps (690bhp) before the estimated extra 150bhp from the Energy Recovery Systems is added, giving F1 cars more power than estimated when the new regulations were devised.

F1 in push to shake up qualifying rules (Autosport)

“[Proposals] include forcing the ten drivers who make it through to Q3 to start the race on the set of tyres that they set their best Q2 lap on.”

“The way things worked out at Jerez, Mercedes seem best prepared to succeed with Rosberg winning the title.”

How to breed a new generation of car enthusiasts (Autocar)

“Six packs of Lego later ?óÔéĽÔÇŁ an F1 car, an F1 support truck, an F40, a Berlinetta 250 GT, a 458 Italia and an FXX ?óÔéĽÔÇŁ and he was hooked. McLaren, for now, is history as far as my boy?óÔéĽÔäós concerned. Ferrari has history: fast cars, racing cars and Lego cars. That?óÔéĽÔäós as good as it gets.”

Just can't understand why some teams think by doing the same things again and again they will find more sponsorship this year!!? Madness

Going to miss this sound, but not the headaches… #V8 #F1 http://t.co/3zczyKYEhe

Not liking this new rear brake by wire solution in #F1. Takes yet more away from the driver. One step closer to robot drivers.

With the new engines offering drivers considerable scope for attacking and defending their rivals, does F1 have another reason to scrap its sticking plaster solution to overtaking?

If it weren?óÔéĽÔäót for DRS then this would have been really interesting. A chasing driver may have been able to overtake, only for the other driver to reverse the positions ?óÔéĽÔÇŁ both knowing that they can?óÔéĽÔäót keep swapping places without burning through their fuel too quickly and then both dropping back through the field.

As it is, with DRS, they?óÔéĽÔäóll just breeze past each other, and use that extra performance to pull ahead out of DRS range.
Rich Rigby

Happy birthday to Victor and Rebecca!

Today in 1994 Damon Hill suffered a major crash at the wheel of an interim Williams FW15D at the Circuit de Catalunya.

The team were still yet to reveal their definitive car for the new season but Benetton already had their new B194 up and running. Michael Schumacher got behind the wheel of it for the first time on the same day, lapping the circuit in 1’18.9.