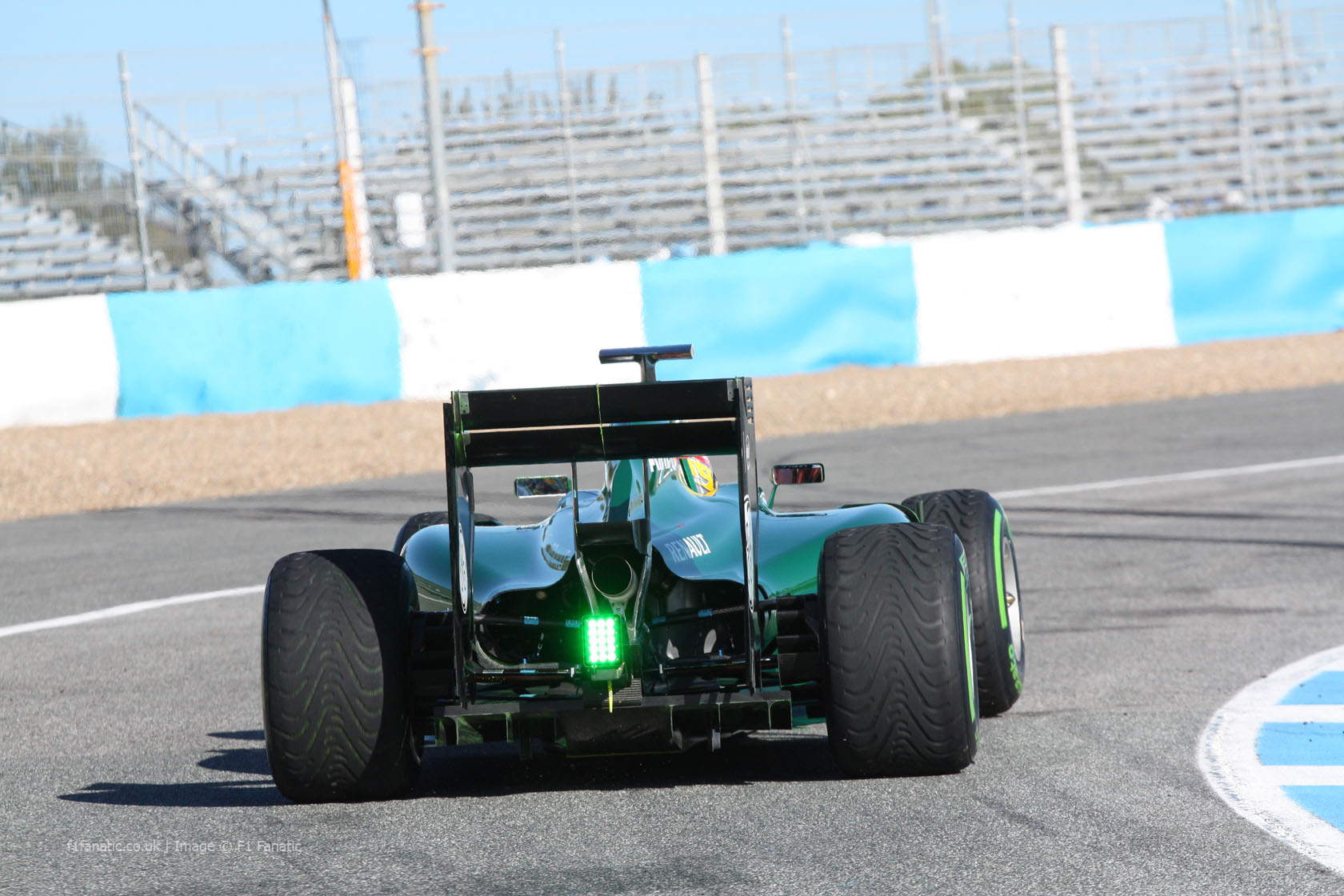 The biggest rules change in a generation is about to hit Formula One.

The new engine formula has attracted widespread debate since it was agreed over two-and-a-half years ago. Now we are finally about to see what F1’s new power units can do.

But the rules changes don’t stop there. There are other innovations in the technical rules and some important new changes regarding driver penalties, safety – and of course the deeply controversial double points plan.

Here’s a quick guide to all of the most significant rules changes for the new season.

Drivers who break the rules may now be given penalty points on their superlicence by the race stewards. If a driver reaches a total of 12 points they will be banned for one race, after which their 12 points are deducted and they can return. Otherwise any points incurred expire after 12 months. The stewards may now impose five-second time penalties on drivers. These are served during their pit stops, during which time the mechanics may not touch the driver’s car. If a driver does not make a further pit stop after the penalty is issued then five seconds are added to their race time instead.

This rule is exempt from the requirement that drivers must serve penalties within three laps of them being issued.

Each driver may only use five complete power units throughout the 19 race weekends. Last year they were allowed to use eight engines. Therefore this year each power unit will do three or four races, whereas last year they were doing two or three. Unlike gearboxes they do not have to be used in consecutive events.

If a driver qualifies low enough that they cannot be moved back all of the places assigned by a grid drop, the remainder of the penalty will carry over to the next race, but not any further races.

Drivers may now receive grid drops if they are released from the pits in an unsafe fashion during practice (which includes qualifying). Unsafe releases during the race can be punished by the usual range of penalties including the new five-second penalty, or by a grid drop at the next race if the driver retires.

In a minor change, teams may not appeal penalties issued during the final three laps of a race (previously five). In a move which has been widely criticised, double points will be awarded for the final race of the year:

A special award will be given to the driver who sets the most pole positions during the season. If two or more drivers have the same number of poles the number of seconds will be used as a tie-breaker, and so on. Teams may now use up to four drivers during first and season practice (previously two).

Drivers have been given a choice of which number their wish to use for the duration of their career. The world champion is the only driver who can use the number one, if they choose to. Their choice of number must be displayed on their crash helmet.

Because of this change, a previous rule stating that drivers who did not set a time in qualifying could be assigned grid positions based on their car number has been scrapped. They will now be arranged by the order they occupied in previous qualifying sessions or final practice. Teams’ running outside of race weekends is now defined in four different ways by the regulations: Testing of Current Cars (TCC), Testing of Previous Cars (TPC), Testing of Historic Cars and Promotional Events.

Eight in-season test days have been permitted (there were none last year), of which each team must give one over to the official tyre supplier for tyre testing.

During tests cars being driven by drivers who do not have superlicences must use green rear lights instead of red ones.

The two-week August factory shut-down which teams have observed in previous seasons is now part of the regulations. The extent of wind tunnel and CFD testing has also been restricted.

Team personnel who work on cars during pit stops are required to wear “head protection”. Each driver now has an extra set of the “prime” specification tyre (12 for the weekend instead of 11) which may only be used during the first 30 minutes of the first practice session and returned before the second practice session.

Unanimous agreement among the teams is no longer required to permit a change in tyre specification during the season. The agreement of 70% of teams is needed (i.e. at least eight of the current eleven).

Drivers must use the same gearboxes for six consecutive races (up from five last year). The rules on which gearbox parts teams may replace have been temporarily relaxed for 2014 only.

Each driver may only use 100kg of fuel “from the time at which the signal to start the race is given to the time each car crosses the line after the end-of-race signal has been given”.

Drivers may be stopped to have their cars weighed during the first three practice sessions as well as during Q1 ad Q2.

Teams are allowed to break the curfew restrictions on working on their cars six times per year. This is up from two last year, but the change is intended for this season only. Drivers are now allowed to perform ‘post-race celebrations’ providing they are done so without endangering anyone, do not infringe the legality of the car and do not hold up the podium ceremony.

Drivers exiting or passing through the pits in the 30 minute period before the start of the race must do so “at a constant speed and with constant throttle”, i.e. not performing any burn-outs.

An addition to the rules on stopping a car during a race states: “Under no circumstances may a driver stop his car on the track without justifiable reason.”

Shortly after this article was published the FIA confirmed a late change to the qualifying rules. Drivers who reach Q3 will now have to start the race on the tyres they used in Q2.

The huge changes to the technical rules have been covered here previously during the two-year build-up to their introduction. The changes to the cars are summarised below and illustrated in the video above.