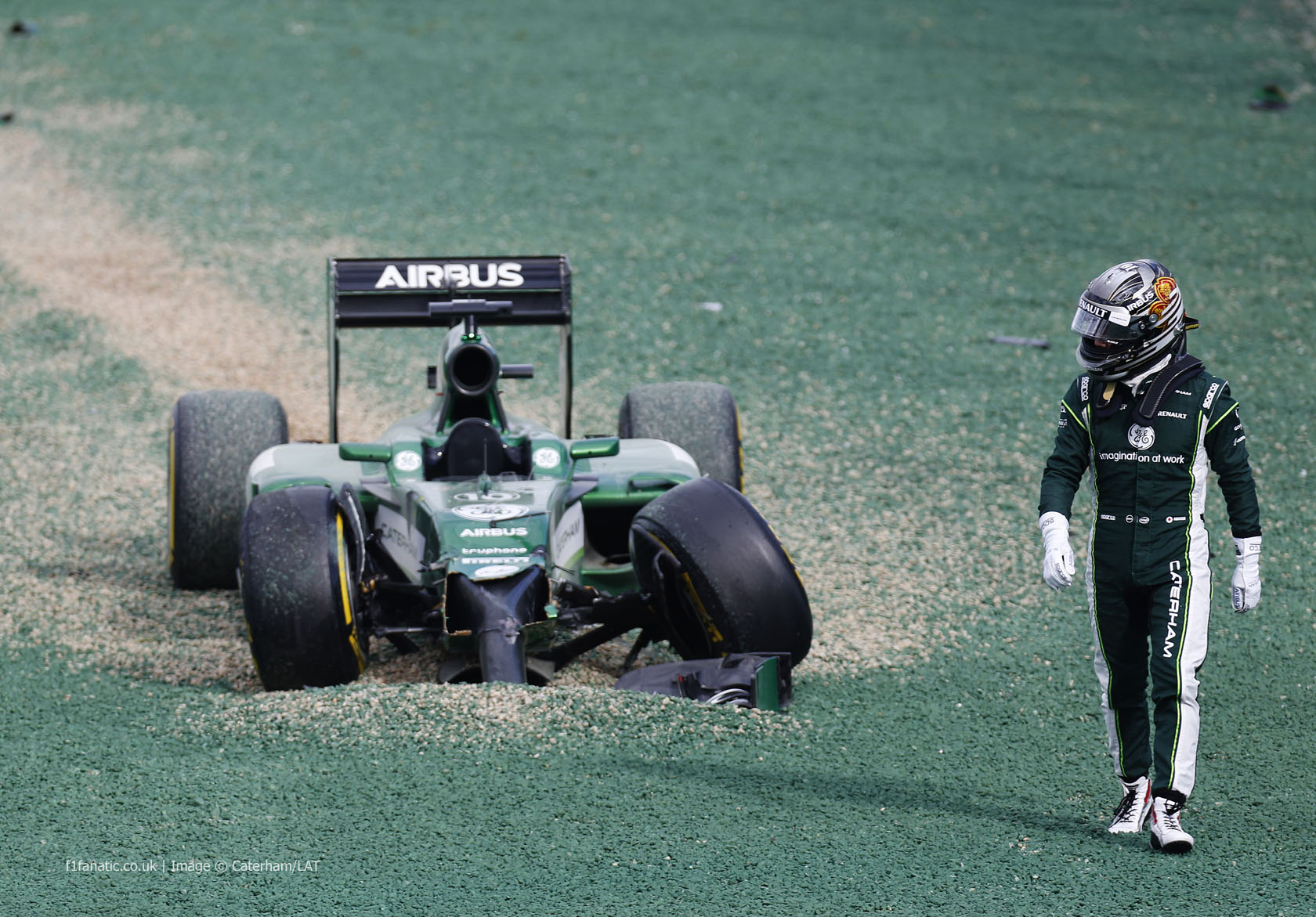 Ten of the best pictures which tell the story of the Australian Grand Prix weekend. Daniil Kvyat had an outstanding though not error-free first weekend for Toro Rosso. Having accompanied team mate Jean-Eric Vergne into Q3 he went off in the dying moments of the rain-hit session damaging his car. But he drove a clean race and in doing so became F1’s youngest points scorer of all time. A Caterham mechanic is illuminated by the rear light on the CT05 as he starts the engine. The team endured a horrendous Friday, managing just three laps. Final practice on Saturday was a considerable improvement an in qualifying Kamui Kobayashi got his car into Q2. Daniel Ricciardo uses every last millimetre of tarmac at turn 15 during the dry final practice session. A superb first weekend on home ground with Red Bull saw him qualify on the front row and deliver second place in the race. But he was thrown out of the results for a technical infringement. Lewis Hamilton mastered the wet conditions in qualifying to claim pole position. Here the ERS indicator lights glow on the cars behind him as he waits to join the track. But Hamilton’s race went wrong before the start as his engine failed to fire properly. While team mate Nico Rosberg dodged past into the lead, McLaren’s Kevin Magnussen almost lost control of his car in front of Fernando Alonso. A failure in the braking system on Kobayashi’s car sent him skidding out of control into the first corner at the start. He bounced off Kimi Raikkonen’s Ferrari then ploughed into Felipe Massa’s Williams. Raikkonen went wheel-to-wheel with the other Williams of Valtteri Bottas twice during the race. Bottas demonstrated the speed of the Williams by passing the Ferrari twice, while Raikkonen was also coping with electronic problems. On his fourth attempt Nico Hulkenberg finally made it beyond the first lap of the Australian Grand Prix. He did so in impressive style, holding Fernando Alonso at bay for more than half the race before losing out at the final round of pit stops. McLaren mechanics cheer Magnussen who brought his car home on the podium in his first ever race. With Jenson Button finishing behind him and both later being promoted by Ricciardo’s retirement, McLaren took the lead in the constructors’ championship. Rosberg got his season off to a winning start and based on Mercedes’ daunting performance we may see him and Hamilton spraying a lot more champagne in the coming races.