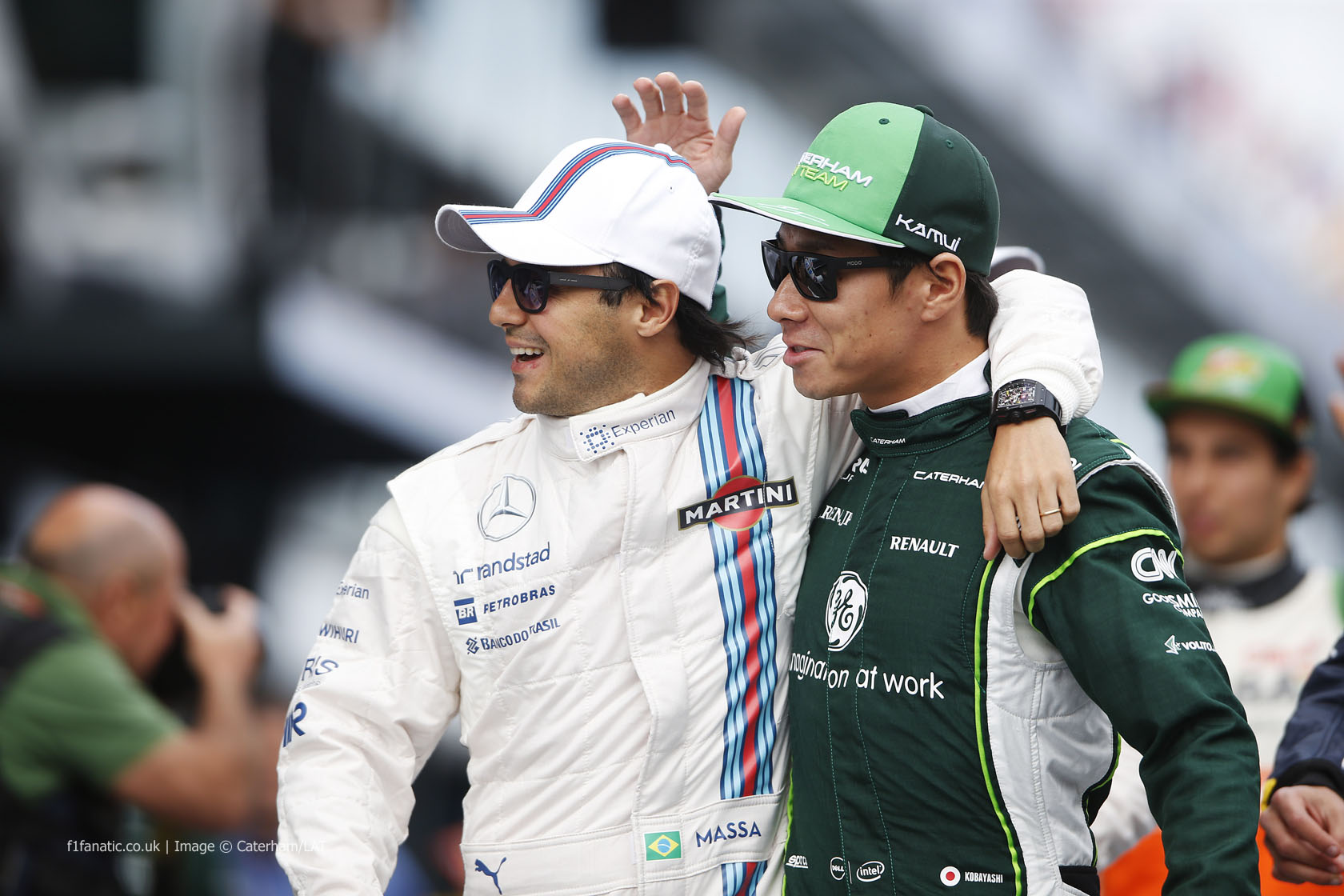 Formula One burst back to life in Australia last weekend. Here’s a look at how the weekend unfolded on social media.

The first day of action – or inaction as far as the Caterham drivers were concerned.

Guessing @MassaFelipe19 was shaken, not stirred by that trip on the rocks

Ron Dennis is back! pic.twitter.com/pumeoDGUIA

The bulging side of the Red Bull of Sebastian Vettel after FP1 today in Melbourne. #F1 pic.twitter.com/eXW1xxUZO8

The glorious conditions on Friday were replaced by rain ahead of qualifying. Lotus’s struggle with their E22 went on as both drivers were eliminated in Q1.

Lewis Hamilton mastered the conditions to start the race on pole position while Daniel Ricciardo, Kevin Magnussen and Daniil Kvyat all impressed.

You're in the driving seat: reckon you could handle all these switches at 185mph?!? #AusGP pic.twitter.com/omb0HnMT8g

"The car is undriveable in those kind of conditions, it's dangerous," Grosjean reported before getting out. #F1

What's this? Both cars out at the start of the session? That's a turn-up for the books

Most drivers are already ahead of the scene of Raikkonen's crash so they can improve their times. #F1

#Melbourne #F1 as many other guys, 1st proper time on the wet with 2014 car was today during QU!

What a quali session… Really really tricky stuff… @danielricciardo massively impressive mate, and have a smooth one tomorrow. 👍🎯 #happy

So it was double points for the last race and reverse grids all season right? pic.twitter.com/6ywLqhCrw3

Glad to see Lotus keeping up the humorous tweets. Reverse grids all season would be a less woeful idea than double points! #F1

Did you know that @ValtteriBottas helmet design is heavily influenced by the helmet @olivier_panis wore in the 90's?

Even though they're cheering for @danielricciardo, great to hear the roar and passion of the local crowd! Awesome atmosphere @ausgrandprix

Ricciardo: "Just one for Simon, into the last corner, felt something on the front left corner. Not sure if I hit debris." #F1

Well done @kamui_kobayashi .you spirit determination and can do is a lesson for all of us.

To be on pole here today is a fantastic result for us. It was great fun and I'm really looking forward to the race tomorrow!! #temalh

The rain stayed away for race day and Nico Rosberg gave Mercedes a winning start to the season after Hamilton’s car failed early on.

A dream Red Bull debut for Ricciardo was dashed hours after the race when he was excluded from the results. That promoted Magnussen, who’s already finished on the podium in his debut, to a fine second place.

The early bird..? The #Melbourne paddock is still largely empty as we arrive for today's #AusGP! pic.twitter.com/Puo5fZCSPj

We do love Race Days! The fans trackside are ready, are you? #AusGP #WeLoveWhatWeDo pic.twitter.com/q8A9Sk9Pjh

We are sure we've seen this somewhere before? @WilliamsRacing we like your style. #AusGP pic.twitter.com/mAvUYSFUpM

#RIPpapa – Every single member of the team is wearing one of these today… pic.twitter.com/bocm1v62N8

Sorry for messed up it's just my mistake sorry to Felipe and @CaterhamF1 all member!

"And Kevin look after front left in turn 13." When a message clip starts with "and" like that you know they cut something interesting. #F1

Eric Boulier should give a seat to elder man Ron Dennis at gantry !! Looks very rude!

This is a great photo!! I'm crying as well. pic.twitter.com/PWvQddMJgd

Really proud. To be on the podium made me realize how fortunate I am. Thank you to my family, my manager and all my friends back home.

Team silver arrows made it happen today. Fantastic result and my car is so damn fast!!:) pic.twitter.com/K68psIJiWW

Someone criticize me on twitter but I want ask how can I stop the car with out rear brake? I need jump out to push back the car?

But pity about the one mistake, sure will learn from it. Anyway P5 is good start, but there is more to come ;) Cant wait for Malaysian GP!

Feel very sorry for DR @danielricciardo though .. He will be back up there soon for sure

Paddy Lowe: “It was fantastic to get the win on behalf of the hundreds of people in Brackley, Brixworth and Stuttgart. A special mention…

…must also go to Ross Brawn. I would like to thank him for his contribution in the years leading to this point, which we can now build upon”

Thank you for all your support so far this year as you can imagine it's appreciated more than ever, special thanks to the F1 paddock for

Wearing pink for Papa badges or shirts. He was definitely smiling down on us yesterday. #Pinkforpapa #JB22

Mixed emotions but all in all a great wkend & nothings taking this feeling away from me. Thanks for all the support! pic.twitter.com/kFIOgeT7wc