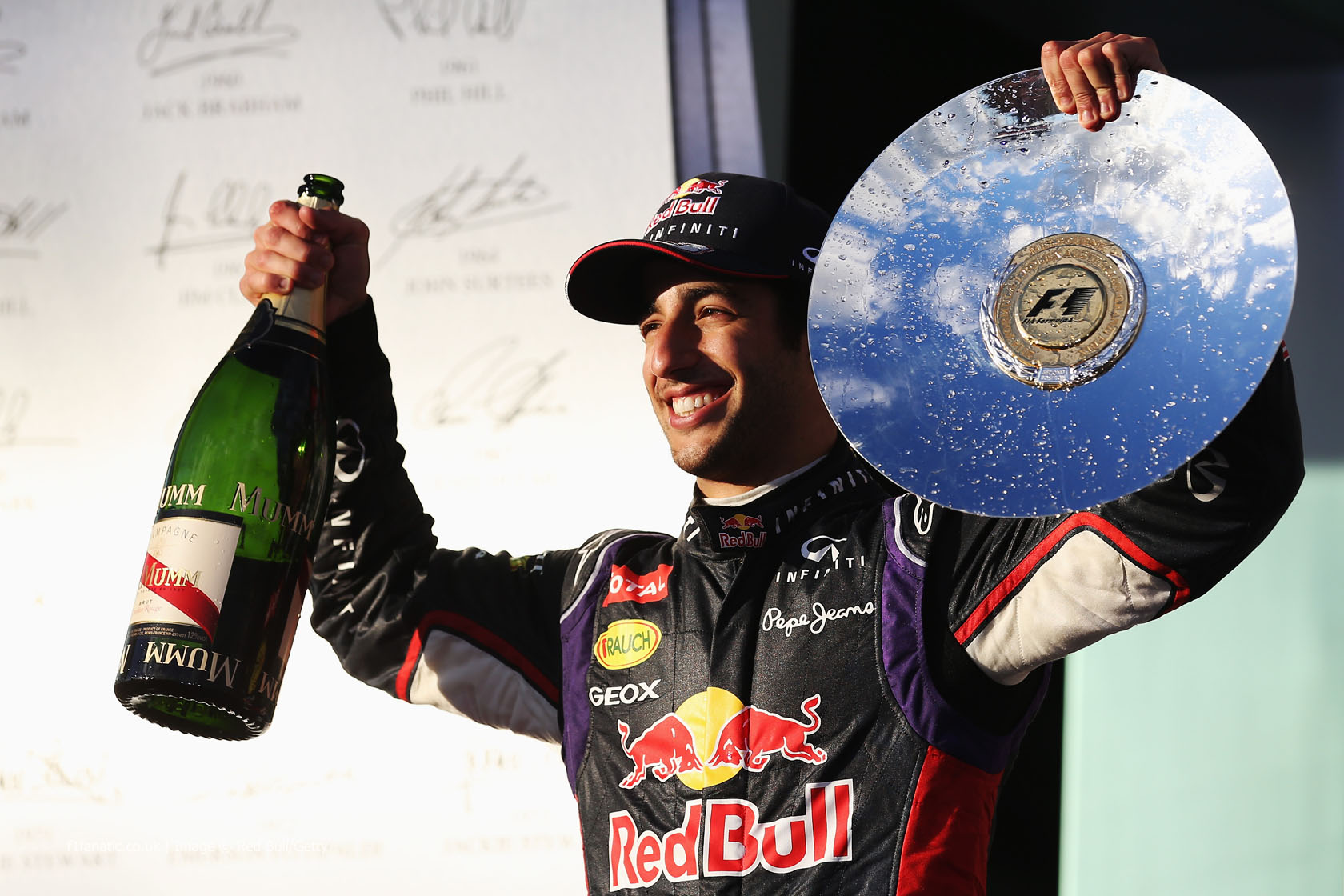 In the round-up: Red Bull formally submit their appeal against Daniel Ricciardo’s disqualification from second place in the Australian Grand Prix.

“After immediately serving notice of their intention to appeal, the team were then given 96 hours to process their application, doing so just ahead of Thursday’s deadline via the Austrian motor sport federation. A hearing will now go before the FIA’s court of appeal at a date yet to be determined.”

“Race winner Nico Rosberg’s team were asked to modify it in both qualifying and the race – their readings were also not the same as the FIA’s.”

Niki Lauda: “Because everybody involved decided five years ago that they wanted turbo engines, a turbocharger was fitted between the cylinder and exhaust. That means you have a different sound, like every kid knows. We will get used to it.”

“If you look at some of the teams and their development curve it was quite phenomenal what Red Bull managed to achieve.” “We are confident that we will be half a second quicker at the next grand prix, for a variety of reasons.”

“Every team up and down this pitlane will be taking very important key decision-makers into the garages, and it’s probably that more than anything else where there is an impact.”

“I’m 75 this year and it’s good governance to let someone fresh take the reins.”

A look behind the scenes at FOTA: Part 2 (The F1 Broadcasting Blog)

Oliver Weingarten: “The landscape changed dramatically within two months of my employment commencing. Teams had resigned, were arguing over cost control, the Geneva office was being closed down, and most significantly teams struck individual deals with the Commercial Rights Holder (CRH), meaning that the idea of collectively bargaining to achieve a better commercial position, was made redundant.”

Spread across the globe (Toro Rosso)

“The first item on [Daniil Kvyat’s] agenda is going over some of the Albert Park data, before moving on to the Malaysian track. He won’t be able to experience the heat and humidity, but he will be able to work on car set-up as well as looking at routines linked to the new technology, such as recharging the batteries and getting a general feel for how the new power unit will work at this track, which features very different characteristics to Melbourne: high speeds, long straights and a second race for the new engines in very high ambient temperatures will provide a stern test for all eleven teams.”

“What was the first Grand Prix you can remember watching?
NH: That was when I went to Spa in 1998, when the big accident happened on Lap 1. Later in the race Schuey (Michael Schumacher) ran into the back of DC (David Coulthard) and eventually I think Damon Hill won in the Jordan. Quite an entertaining race. It was an awesome experience, one which I will never forget.”

“You’d be forgiven for thinking it was an early April Fool’s joke as world champion Sebastian Vettel’s car was found illegally parked inside the Milton Keynes Council’s Civic Offices on Wednesday.”

It's been a long road since the 2014 #F1 regs were revealed. Here's to 992 days of hard work well worth it! #TeamWork pic.twitter.com/rJBO8TO9Ps

@Palle offers some more perspective on the issue of reliability this year:

Working with development and running of technical equipment (mine hunting at sea) it is clear that the unreliability of F1 in the 1990s wasn’t at all a sign of engineering being on the limit. The teams – and Ferrari in particular – had just not made the analysis of how much the lack of quality control and verification before implementation did actually cost them in terms of DNFs and lost points. It was an unprofessional approach to the subject of controlling the quality of the equipment supplied to the part of the teams running the race cars during race weekends.

What changed it, at least by Ferrari, was the hiring of Ross Brawn, who turned their attention to quality control of every possible technical aspect. This founded the basis for the later Schumacher dominance era. I couldn’t find the data showing Ferraris improvement in terms of DNFs, but I found this quote from an interview with Pat Fry:

“Ross [was] obviously very organised and methodical. If you plot out the whole of the 1990s Ferrari’s reliability it was something like 25 per cent. Then Ross arrived when it stepped up to 90 per cent within six months, which was quite telling in terms of putting in structural changes to ensure that.”

That said the present day added F1 drivetrain complexity will lead to a slightly lower reliability due to the numbers: Any system has a given MTBF (Mean Time Between Failures) and when you string more interdependent subsystems together the MTBF decreases. This means that if this season has a Mercedes team one second ahead of everyone else, the drivers’ championship will be decided primarily by the number of DNFs due to technical glitches from either Rosberg’s or Hamilton’s side of the garage.

Rosberg’s pit communications where he asks if there is anything he can do to improve reliability clearly shows that Rosberg is fully aware of this fact.
@Palle The start of last year’s Indianapolis 500. This year’s race will be one of three on the schedule worth double points, all of which are twice the length of each of the other rounds (bar one). Details here:

Michael Schumacher claimed his second consecutive win at the beginning of the 2004 season with a comfortable victory in Malaysia.

Mark Webber impressed by putting his Jaguar on the front row of the grid, but at the start his revs dipped low enough for the anti-stall to cut in and he was swamped by rivals.

Today is also Ayrton Senna’s birthday – he would have been 54 today.