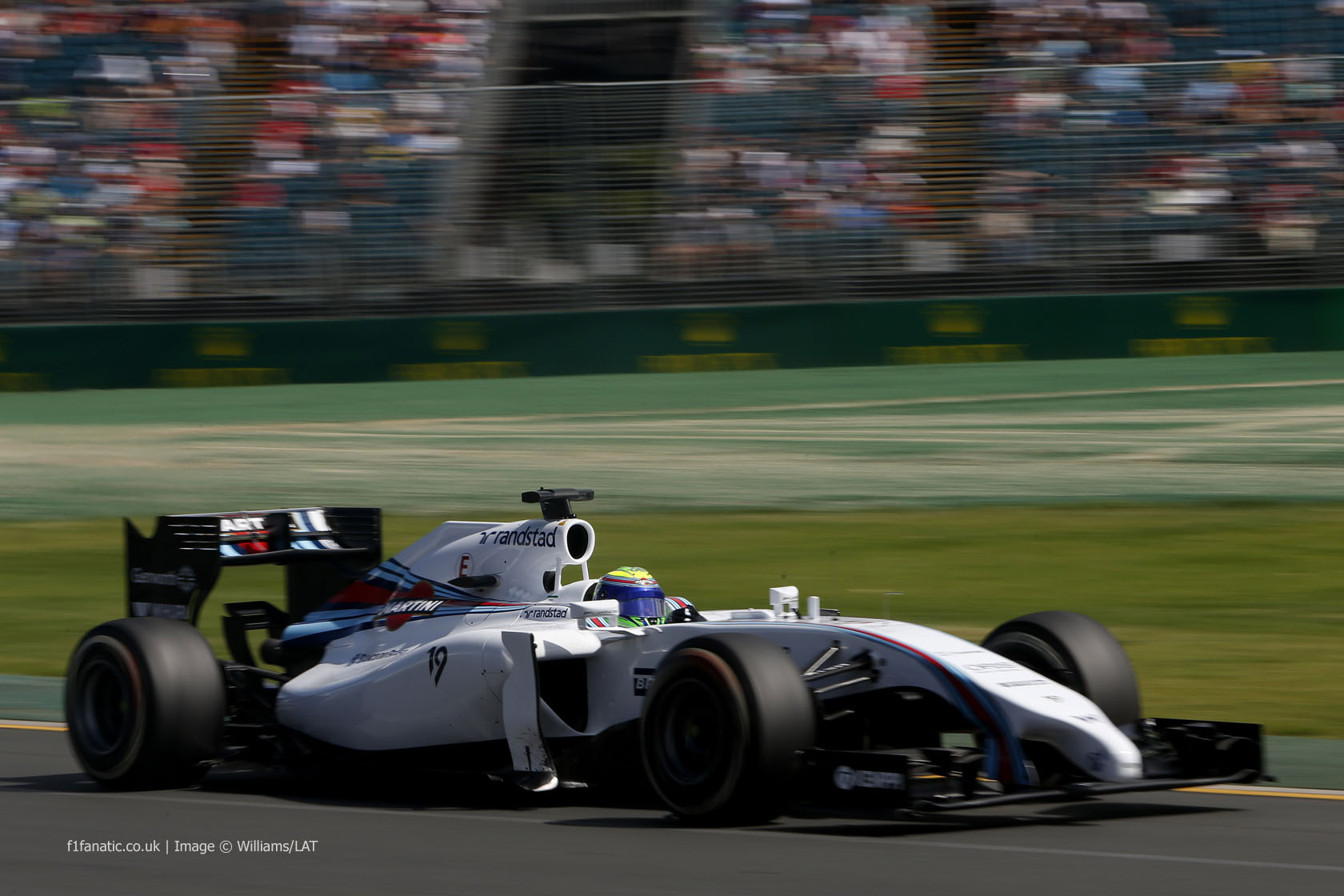 In the round-up: Felipe Massa believes Williams can be the second-fastest team.

Massa: We can be best of rest (Sky)

“Everything is possible now and looking how we are compared to the others, I would say Mercedes is for the moment too quick compared to us. But I think maybe after Mercedes, everything is open and maybe we can be there.”

Williams yet to peak – Bottas (ESPN)

Valtteri Bottas: “In the braking and entry of corners we were quite strong. You can lean on it and trust it. On power we still have some weak points with the car, and traction is something we need to work on – especially in the wet.”

“In the LMP1 category gasoline fuelled cars must run with two sensors identical to the units at the heart of Red Bull’s disqualification from the Australian Grand Prix. Cars running on diesel fuel must run three, but Porsche says that there is ‘no robust solution’ to the measuring process and doubts that there will be this season.”

“Chinese relatives of the passengers on the missing Malaysian jet have changed hotels to make way for crews arriving for the Malaysian grand prix after two weeks of searches that have yielded little more than fresh questions.”

Deputy team principal Bob Fernley: “Truth be told, we were expecting the aero war to start in Europe, but now I think it’s going to come forward.”

Alejandro Agag: “Next week we will put video online of the car with the sound and I think this will be quite a shock, the sound that these Formula E cars are making… it’s actually quite loud.”

Ayrton Senna’s 54th birthday: Remembering a towering talent that would have delivered so much more (The Independent)

“Senna was not only a brilliant racing driver, he transcended the world of Formula One so that his death stopped clocks across the world. The shock of his loss had a similar impact in the sporting milieu as the death of Princess Diana on the global community three years later in a Parisian underpass.”

“There are a total of nine rotary switches on the wheel. Three are rotary dials, while the remaining six are configured as thumb wheels. The latter allow the driver to make changes to the settings without taking their hand off the wheel.”

The silence of the new era is deafening (UBS)

David Coulthard: “Don’t take my word for it, though. Listen to the reaction from the fans. That is one thing that is coming through extremely loud and clear. And as Toto Wolff, Mercedes’ motorsport boss, pointed out this week, we cannot afford to ignore our fans.”

Last night The Team was honoured with the highly respected Freedom of the Borough accolade in Milton Keynes. pic.twitter.com/xrf60reT8b

Chris says the new Formula One is back at the cutting edge.

I think now, more than (almost) ever, Formula One is as intriguing and “wow” as ever. The cars are technological masterpieces. The V8s, V10s and V12s pale in comparison to how high-tech this new breed of cars are.

Formula One always prides itself on being the “highest class of motorsport”, with the most technologically advanced, and high performance cars in the world. However, the fact of the matter is that other series like the World Endurance Championship were actually far more advanced than the dinosaurs of the later stages of the V8 era.

Finally, Formula One is back on top. And if the amount of noise is the only thing that’s being used as an argument that F1 has “lost its wow factor”, then I encourage you to listen to the palette and range of different noises that these new cars make. Every team’s car sounds different. Last year, if you were to hear a car go past, unless you’re an extreme anorak, you’re not going to have a clue which car went past, however with these new ones, it’s a little easier, because they have subtle differences. Not to mention the gloriously space-age sound of the turbo whining just sounds terrific.

One final point: The drivers are having to earn their money now (except Kobayashi) with these new levels of torque. The cars are far more difficult to drive, and the cream will rise to the top. The last five years the cars looked too easy to drive (I’m sure they weren’t, but relatively speaking, they were easy), so now, the drivers can make more of an impact on the performance of the car. With all this new technology, they’ve inadvertently made the driver, arguably, the most important part of the car. It’s become more of a drivers formula. And that’s a good thing in my opinion.
Chris (@Tophercheese21)

It’s 40 years since Peter Revson lost his life in a crash during testing at Kyalami.

The heir to the Revlon cosmetics fortune had won the British and Canadian Grands Prix the year before for McLaren, then opted to move to Shadow rather than become a third-string entry at the team alongside the incoming Emerson Fittipaldi.

His car left the track during practice at the South African circuit, seemingly due to suspension failure, and struck a barrier at high speed.

72 comments on “Williams can be second-fastest team – Massa”