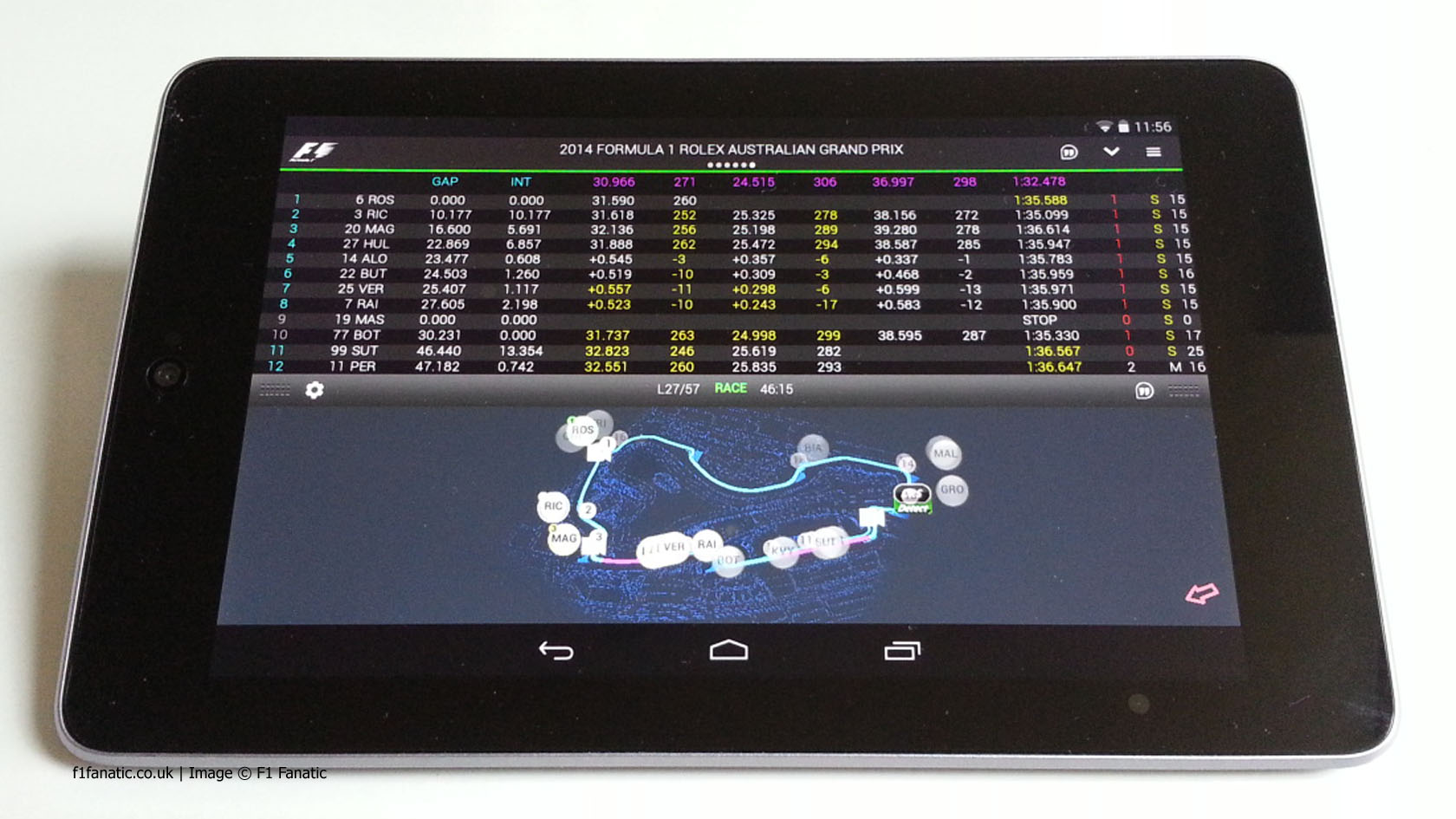 The quieter sound of the new engines wasn’t the only cause for complaint for some during last week’s Australian Grand Prix.

As the first race weekend of the season got underway many fans were more than a little disappointed to discover that the live timing page on the official F1 website had been stripped of most of its functionality. No sector times, no lap chart, no weather information – just a list of lap times and purple/green/white sector time indicator lights.

Since the official Formula One app first went on sale it’s been a question of when rather than if the free version would be cut back to give viewers an incentive to buy. But does the paid version offer a sufficient increase in functionality at a reasonable enough price to be worth it?

Pricing has been a major area of complaint with this app in years past. The 2013 edition was priced at an excessive £23.99 for a single season.

The new version, marketed by Formula One Digital Media instead of Soft Pauer, appeared with little fanfare shortly before the new season began but immediately distinguished itself with a substantial price cut.

It’s now offered for a much more sensible £9.99 for the all-bells-and-whistles version. For your money you get much the same information as was available in last year’s app, including a live map of the circuit, detailed sector information and speed, gear and tyre data.

A free offering remains, though as on the website you only get a basic leaderboard and text commentary. The paid version remains a one-year subscription.

The experience of using it is familiar from previous apps and does it a good job of presenting complicated and rapidly-changing data in an intelligible way.

I’m sure I would have enjoyed rummaging through the rich data on offer but I couldn’t, for the simple reason that the app is unbelievably buggy. You get the full gamut of glitches: it fails to load, crashes mid-session, dumbly fails to respond to your taps and shows wildly incorrect information.

Throughout the Australian Grand Prix weekend it was unusable, and on the infrequent occasions when it did run the data stream was usually well behind the free website timing screen. When the developers get all the bugs worked out it may well be an excellent app, but it’s a leap of faith at the moment.

Choosing to cut back the free live timing page may make sense as a business decision, but failing to offer a corresponding paid version for desktop users doesn’t – and wouldn’t even if the paid add worked beautifully. It clearly wasn’t ready for the start of the season, leaving F1 fans less well catered for in this respect than they were six months ago.

Last week team principals admitted they had been surprised by the strength of reaction from fans against the dismal double points rule. No doubt for some changes like this are enough to turn the off the sport completely.

But more often than not it isn’t a single change, rather an accumulation of factors which prompts a person to give up on something they once enjoyed. Factors like the inconveniences of not being able to follow the sport as well or as closely as they used to.

The gutting of the free live timing page and the huge shortcomings in the paid version (price cut notwithstanding) is another example of how those who are supposed to be marketing the sport are getting it wrong at the risk of alienating its fan base.

The official F1 Live Timing App 2014 can be purchased through Google Play for Android, iTunes for Apple