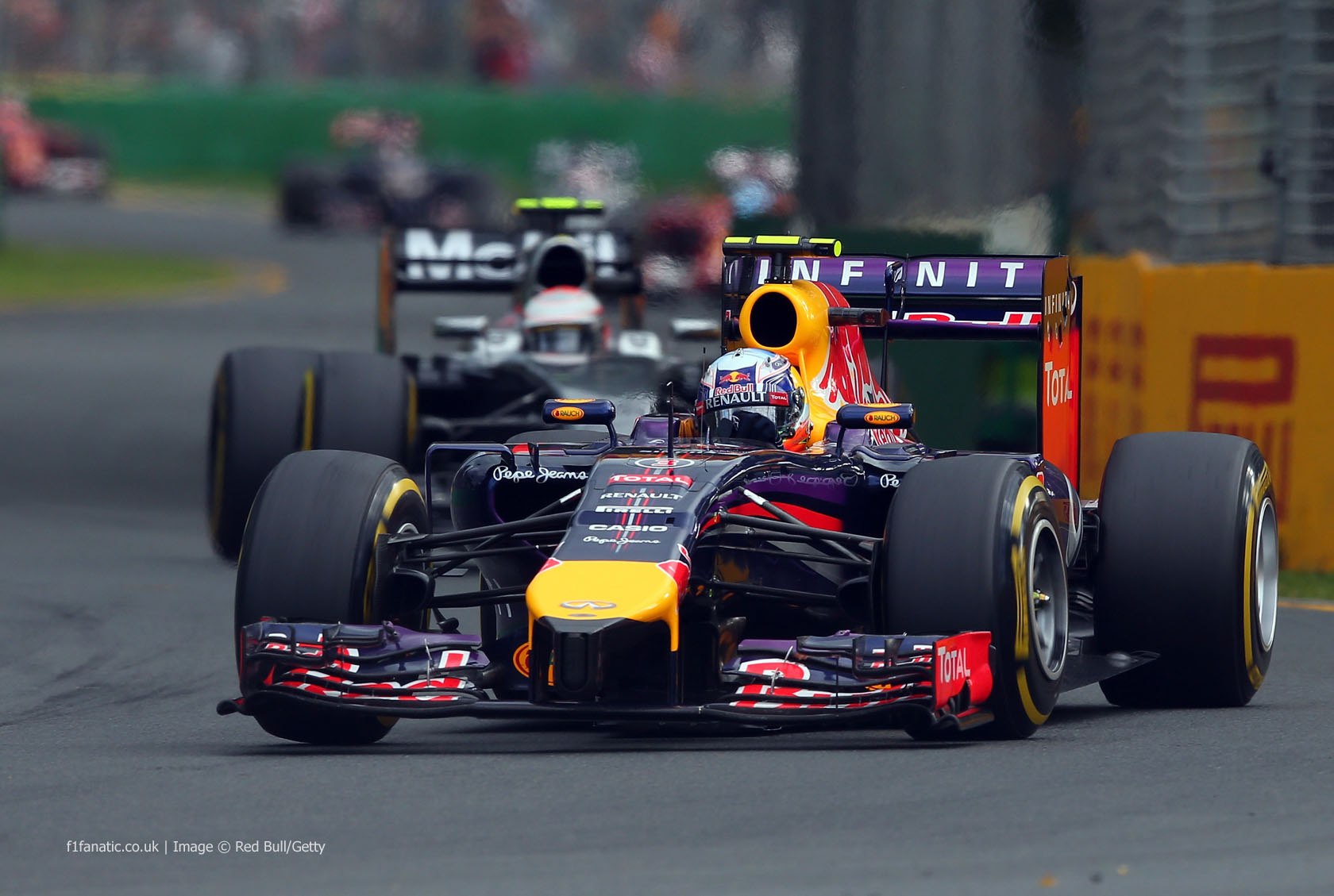 In the round-up: Red Bull will make a question of interpretation over the rules regarding fuel flow rate a focus of their appeal against Daniel Ricciardo’s disqualification.

“The world champions’ argument centres on the wording of the FIA’s Technical Regulations with Article 5.1.4 stating ‘Fuel mass flow must not exceed 100kg/h’. However, as it does not say that this reading has to come from the FIA’s sensor Red Bull feel they can use their own measurements to prove they did not breach the regulations.”

“We had several issues across the cars in Melbourne but we have recreated the problems in the dyno at Viry. Most are fixed and the remaining will be under control by Friday in Sepang.”

Toto Wolff: “We haven’t seen Sebastian [Vettel] running with a reliable car and a fast car and you would expect him with his experience to go even faster.”

“Gary Hartstein, F1 sport’s chief doctor between 2005 and 2012, says he had heard from ‘usually impeccable sources’ to say that these lapses ‘could, and almost certainly did, worsen the outcome in Michael’s case.’ But he does not explain what this medical mismanagement was.”

“Spanish television-production company Mediapro plans to start a regional 24-hour Formula One channel after acquiring the series’ rights for most of Central and South America and the Caribbean.”

Australian Grand Prix promoter Ron Walker: “We haven’t signed a new contract with Bernie, so this is going to put a lot of pressure on the FIA. It doesn’t have the right to destroy this sport. It will ruin the sport that Bernie built over this. Out of any single problem, this is the one that will kill the golden goose. It is hard enough to sell tickets now but this is arrogance at the worst from Jean Todt.”

Formula One needs new solution before total revolt (The Telegraph)

“The idea that a ‘fans’ revolt’ is sufficient to precipitate a major change in the regulations is also frankly laughable, given how the imposition of double points is at odds with the view of the overwhelming majority of fans, as well as drivers.”

Derek Warwick: “These cars are more difficult to drive and we’re going to see a massive difference between the good drivers and the average drivers.”

“The noise of high rpm is to be replaced, by what we don’t know, but it will be quieter. The view is that the risk of this new noise being unappealing is a risk worth taking.”

Tosh in the papers (Joe Saward)

“One might speculate that such a story is designed to frighten investors looking to buy Formula One from CVC Capital Partners.”

Some claim a "fan revolt" over engines: http://t.co/4yeV1HM6e5. Here's what they actually say. pic.twitter.com/FRz40tWqhU http://t.co/ClS7sXVFbr

Just like old times: @janmagnussen will be in Malaysia this weekend to watch his son @KevinMagnussen race. #F1 pic.twitter.com/r0PUhCm3Ik

Bag ready for Malaysia, always a special GP! Superb race track. My 1st pole and podium there, and 3 wins with 3 different teams. Happy..

Dietrich Mateschitz isn’t happy with the new Formula One rules but @JayMenon10 reckons they’ve got it right:

I think everyone who has been complaining about the apparent lack of noise and the fact that the cars are lapping slower need to take a step back and look at the big picture.

F1 was once sold as the breeding grounds for new automotive technology. A lot of F1 technology pioneered in the 80s and 90s are common place in our road cars now. Over the last ten years, innovation has been stifled by regressive rules. The arrival of the new formula is the shot in the arm we needed in F1. More than anything else, it is relevant to the current market. LMP1 and WEC were more road relevant than F1. This is probably why it has thrived over the same period where F1 has remained stale.

Yes it doesn’t sound as great, and it does take some of the thrill away, but we need to be progressive. The pace will come, and it will be back to F1 speeds very soon.

The change to the new formula has probably safeguarded the long term future of the sport. I’m being optimistic, but the return of Honda could herald the beginning of a new constructor era. I say this because, if the Porsche 918 and McLaren P1 are anything to go by, this new high performance hybrid technology will be what every car manufacturer is coveting!

Would love to see BMW and Toyota back as engine suppliers!
@JayMenon10 Jarno Trulli has become the latest driver to sample a Formula E car. See video and more images from his test here:

Nigel Mansell took a surprise win in his first race for Ferrari at Brazil 25 years ago today.

The new Ferrari 640’s semi-automatic gearbox had given the team endless grief in testing and Mansell even had to pit for a replacement wheel at one point in the race.

But with Ayrton Senna eliminating himself in a first-corner collision with Mansell’s team mate Gerhard Berger, and the other McLaren of Alain Prost suffered clutch trouble, Mansell claimed a win few had predicted.