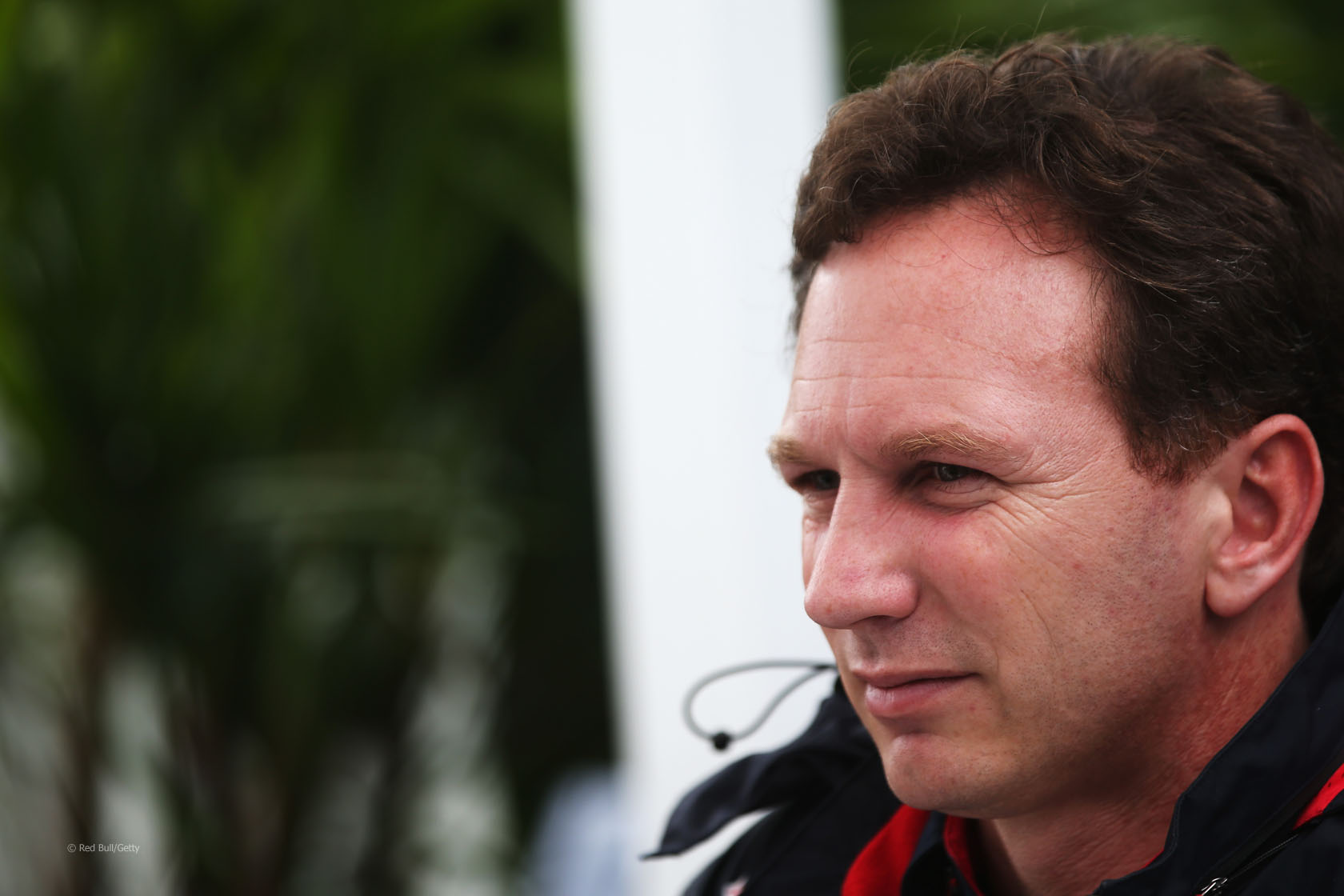 In the round-up: Red Bull team principal Christian Horner says F1 needs to find a better alternative to the fuel flow sensors or get rid of them.

“We need a better way of measuring and monitoring the fuel flow, or say you get rid of it and you have 100kg for the race and that’s it. Personally, I think it would be easier to get rid of it.”

“The stewards, meanwhile, said it would be “very dangerous” to abandon the ruling, and could cause accidents on the straights, as the escalation of claim and counter-claim continued.”

“It’s very difficult for the FIA to police. On an aeroplane you would have three sensors. If one becomes erroneous you’ll take the average of the other two. There are ways that we need to ensure this is measured accurately.”

“Article 5.10 makes it quite clear in my view that the only way that the fuel flow will be measured is with the homologated sensor. As you probably know Gill is the only sensor that is homologated by the FIA. So for me it’s perfectly clear.”

“[CVC are] asset-strippers, they’re not builders. They’re not bad guys but they just don’t fit Formula One. They have devalued Formula One by allowing it to become a fragmented sport with so many bilateral agreements with individual teams.”

“Although the return from F1 is turbo-charged it won’t even scratch the surface of the amount owed by Lehman which comes to a total of around $450bn.”

“The only downer was that when the safety car came out we missed going into the pits by something like five seconds – Jenson Button behind me managed to pit and when coming out he gained some positions. I wouldn’t say that we could have finished ahead of him, but probably ahead of Kimi (Raikkonen).”

“We have the same car more or less compared to Australia. This is a different track, so we need to see how the car behaves here, but we’re working 100 per cent in the factory to improve.”

“Tomorrow, everything is shifted a couple of hours, so that FP3 gets underway at 13h00 with the second qualifying session of the season beginning at 16:00 local time. Today, at 16:30 we witnessed a spectacular storm that caused a Porsche race to be red-flagged and as the daily weather pattern often repeats itself in this tropical part of the world…”

“The former Red Bull racer says the pill is a welcome change from the alternative method of taking a person’s core temperature – by using a rectal thermometer.”

“There are all sorts of ways to affect that: how late or early you change gears, what gear you take a corner in – and in particular, when you’re braking and using a technique called ‘lift and coast’. I’m sure hardly anyone knows what that means.”

“The 19 year-old’s 2014 title charger, backed by Forresters and Auto Windscreens, features completely new livery influenced by the Brabham BT59, the car in which Sam’s father David made his F1 debut.”

@Jamesallenonf1 should have pushed the TPs more on lack of new and social media in #F1.

First taste of an F1 car in the simulator!! It's a different Beast lots to learn but incredible fun!!! @OfficialSF1Team

That talkative chap who used to drive for us is P2 for @InsideFerrari at the moment. Watch him – he'll go far.

FIA checked fuel flow rate of all cars in second practice (including those who didn't set times) except for Bianchi, Kvyat & Hulkenberg. #F1

Ultimately, F1 is a mess. Fans hate the sound, cars unreliable, measuring technology unreliable, even Bernie doesn't like it and he owns it!

Jonathan Neale talks to @antonioboselli: "In 2014 we need more cooling than ever before – 50% more radiator surface!" pic.twitter.com/dgIbfoRmgG

JP has installed pressure pads to catch drivers who take 4 wheels off track @Brands_Hatch – something F1 should consider or OTT?

One of the most frequently expressed sentiments about the interminable engine noise debate:

I imagine the promoters will say almost anything if there’s even a slim chance they have to pay less fees. But this debate on the sound has gone far enough.

It only matters to those who care more about the ‘entertainment’ factor than the sport itself. Double points is the real controversy of this season, because it is nothing more than a cheap gimmick, like DRS and the tyres (which are thankfully not an issue this season).

F1 should be all about racing with cutting edge technology. The sound is irrelevant and the issue should be laid to rest because it is a boring non-issue which distracts from problems which actually effect the sport.
Adam Kibbey (@Kibblesworth)

A remarkable Australian Grand Prix on this day in 2009 produced a one-two finish for Brawn, the team formed after the abrupt withdrawal of Honda over the winter. Jenson Button led home Rubens Barrichello.

Behind them Sebastian Vettel and Robert Kubica took each other out in a late-race collision.

That should have promoted Lewis Hamilton to third. But McLaren’s decision to let Jarno Trulli pass him while they were following the Safety Car, and the misleading information given to the stewards by Hamilton and the team afterwards, ultimately led to the McLaren driver bring disqualified from his first race as world champion.

50 comments on “‘Improve fuel sensors or scrap them’ – Horner”