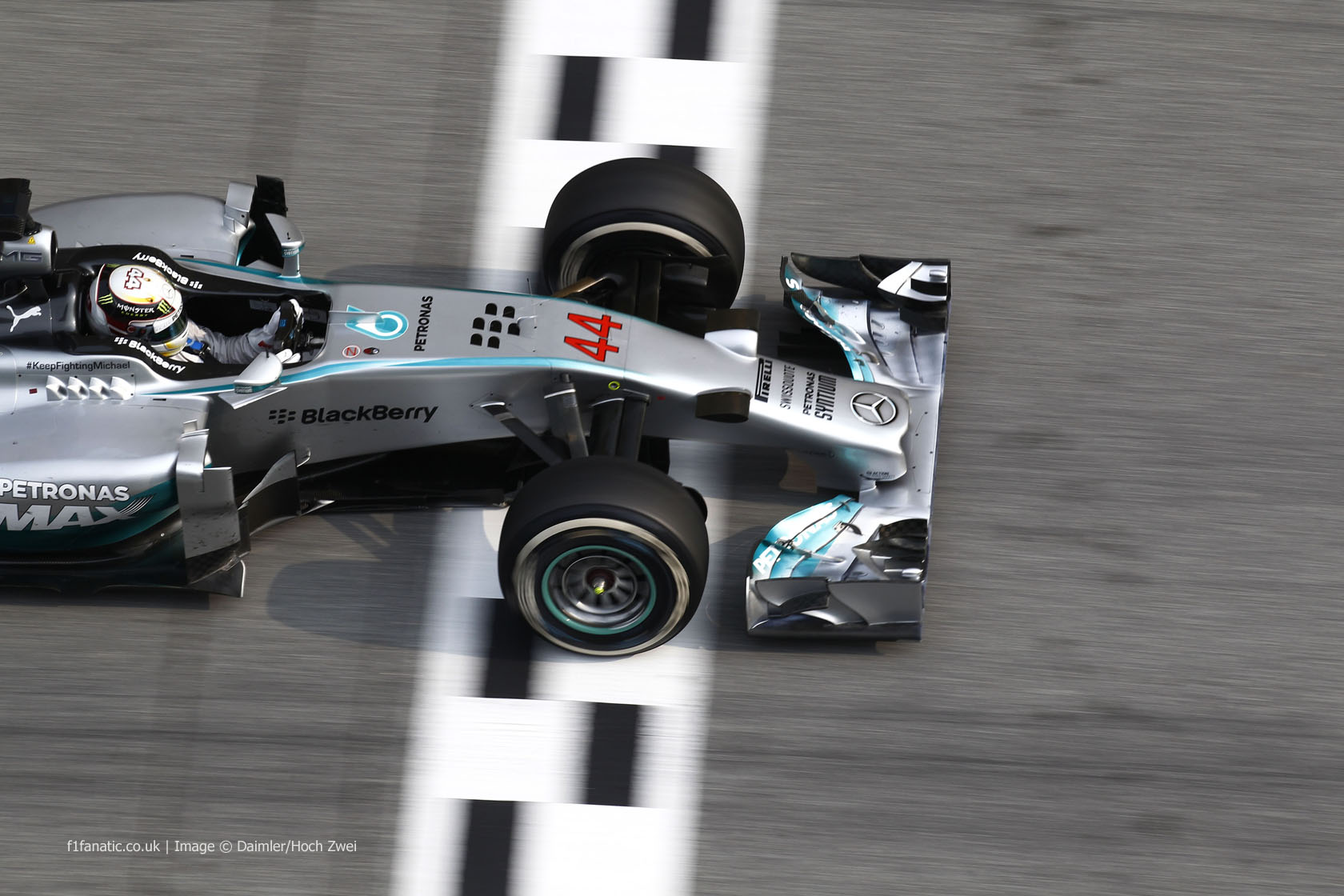 In Australia Lewis Hamilton watched from the sidelines as his team mate cruised to victory, opening up an instant 25-point lead in the championship.

With Mercedes enjoying a one second per lap performance advantage over their competitors the fight for the drivers’ championship is likely to be between Hamilton and team mate Nico Rosberg. Whatever drivers might say about not worrying too much about the points at this stage, Hamilton would not have been happy with a repeat of what happened in Melbourne.

Fifty-six laps of Sepang later it was job done for Hamilton. Rosberg’s championship lead had been checked and another crushing performance by Mercedes left their rivals contemplating the daunting task of how they’re ever going to catch them.

Hamilton enjoyed a buffer between him and Rosberg on the grid in the shape of Sebastian Vettel’s Red Bull. But within a few seconds of the start Rosberg had asserted Mercedes’ superiority, laying claim to second place.

Vettel made him work for it, pinching the Mercedes against the pit lane as they sprinted to turn one. “I thought he was going to put me right into the wall,” said Rosberg in the press conference afterwards, “but he stopped just before.”

“I had a similar experience last year,” replied Vettel, no doubt referring to his controversial exchanged with Mark Webber during that race.

“My heartbeat skipped a beat a little bit but I kept right on it,” Rosberg continued. Vettel came back at him at turn one but Rosberg was wise to the move, forcing the RB10 wide in the long, looping right-hander.

This opened up an opportunity for Daniel Ricciardo, who had beaten Fernando Alonso to turn one and now displaced his team mate from third on the outside of turn two.

In turn three Mercedes power briefly got a bit too much for Rosberg, who got all crossed up and momentarily looked as though he might be heading for the scenery. That left him having to defend from Ricciardo once again, and when Vettel tried to capitalise on the situation he succeeded only in running out of road at turn four.

There was more drama further back at the same corner. Jean-Eric Vergne found his Toro Rosso conspicuously lacking in power at the start, and having started in the midfield was already down among the Marussias.

As Jules Bianchi swept past the pair made contact, puncturing the Marussia’s left-rear tyre. Unable to stop in time for the corner he ploughed into the innocent Pastor Maldonado.

Both were able to continue but the stewards came down hard on Bianchi, wielding two of the 2014 rule book’s innovations. He was handed a five-second time penalties and his licence endorsed with two penalty points.

As it was the contact with Maldonado that Bianchi had been penalised for, this seems harsh. He pointed out afterwards that the puncture he had incurred meant he could not avoid hitting the Lotus. And Vergne acknowledged he’d played a role in events as well:

“I found myself in a sandwich between a Caterham and Bianchi and maybe I was a bit too ambitious to think I could try and pass the two cars,” said Vergne. “It was just not possible and this resulted in the collision, which damaged my front wing.”

Bianchi wasn’t the only driver to get a taste of the new 2014 style of justice. As lap two began Kevin Magnussen tagged the back of Kimi Raikkonen’s Ferrari, inflicting a right-rear puncture.

He received the same penalty as Bianchi and afterwards admitted to making a mistake. But it was no consolation to Raikkonen, who had to limp around almost an entire lap of the Sepang International Circuit before pitting for a replacement wheel, incurring more damage to his car as he did.

“After the accident the car’s handling was not the same,” he said, “the tyre had caused damage to the floor, which led to a loss of downforce.”

Hamilton wasted no time in opening up a gap over Rosberg: within three laps he was over four seconds ahead. Rosberg was unable to leave Ricciardo behind as easily as he had in Melbourne, but now one Red Bull was about to be replaced by the other.

As lap four began Vettel got on his DRS button and drew alongside Ricciardo too quickly for his team mate to run him up against the wall as Webber had 12 months earlier. It bore the hallmarks of a move that had been orchestrated by the pit wall, especially as Vettel was only a couple of tenths faster than Ricciardo over the remainder of the first stint.

Not far behind them another pair of team mates were also going wheel-to-wheel. An unhappy Felipe Massa complained on his radio about Valtteri Bottas, who was trying to pass him, leading Williams to warn Bottas “don’t attack Massa, don’t be aggressive to Massa”.

The pair were trying to take advantage of Magnussen’s lack of pace due to his broken front wing. But Massa was unable to put a pass on the McLaren and by lap eight they had fallen six seconds behind the next car, belonging to Button.

McLaren decided Magnussen’s wing was costing him too much time and brought him in for a pit stop. That released the Williams pair to close the gap to Jenson Button, who was running seventh. The flurry of pit stops begun by Magnussen’s meant that by lap 12 a gap had opened up which Ferrari could use to bring Alonso in and get him out in clear air. As in Australia he was in close company with Hulkenberg, but while Alonso committed early to a three-stop strategy Force India steered Hulkenberg towards a two-stop plan.

In response to Alonso’s pit stop Red Bull brought Ricciardo in before Vettel – despite them being separated by less than two seconds – to maximise their chances of keeping both cars ahead of the Ferrari. It succeeded thanks to some muscular driving on the part of Ricciardo, re-passing Alonso on the outside of turn two when he emerged from the pits on lap 13.

Vettel, Rosberg and Hamilton pitted in that order over the subsequent laps, retaining the same running order. As Hulkenberg stayed out he briefly held the lead, but Hamilton easily out-accelerated him into turn 11 before the Force India driver got the credit for leading a lap.

Alonso was the first of the leading group of drivers to make his second pit stop as well, and deviated from his rivals by switching from medium tyres to hards. That gave him the chance to go on the attack later on using the medium tyres – providing, of course, it did not rain.

As it turned out the weather was on Alonso’s side. A few minor showers kept the teams guessing, and gave them an incentive to leave their drivers out a little longer at the end of their third stints.

Rosberg could do little about his team mate. “He was a bit too quick today,” Rosberg admitted afterwards. “It was a bit difficult out there because the track was really poor, it seemed, sliding so much, and just struggling with the rear tyres especially.”

But by the end of the first stint Rosberg had stretched his margin over Vettel to around five seconds . In the second stint Vettel closed to within two seconds, but Mercedes seem not to have been genuinely worried about the threat from the Red Bull.

Hamilton and Rosberg were both told to turn their engines down to prevent unnecessary strain on them well before half-distance. “I had some pace in hand so I could beat him in the end,” Rosberg revealed.

Red Bull appeared to eat into their 100kg fuel allocation more quickly than their rivals – at least, according to the fuel consumption data broadcast during the race. During the final stint Vettel was told at least twice to save fuel, and during this time Rosberg restored his lead.

Blow for Sauber – and Ricciardo Even in the punishing heat of Malaysia the widely-predicted spate of unreliability failed to materialise – at least, outside of the Sauber garage. Adrian Sutil came to a sudden stop at the exit of the final corner on lap 33.

“I lost power and then suddenly the car switched off,” he said afterwards. “I don’t know what happened.”

Three laps later the second Sauber of Esteban Gutierrez was pushed back into the garage. This wasn’t a reaction to Sutil’s failure: Gutierrez had come in for a routine pit stop but found himself unable to engage first day afterwards. Nor was there consolation for Sauber in the performance of their cars before their retirements, both having been lapped before their mid-race exits.

But if Sauber were disappointed, the luckless Ricciardo was crushed. He’d kept pace with Vettel after their exchange of positions but his third and final pit stop ruined his race.

The crew man changing the front-left wheel hadn’t signalled his task was complete when the car was sent from the pits and Ricciardo had to come to a stop and be pushed back. He lost a lap and his race unravelled shortly afterwards.

A seemingly innocuous trip across the exit kerb at turn 14 broke his front wing, sending him back into the pits again. The stewards also handed him a ten second time penalty and a ten-place grid penalty for the next race. The team eventually retired his car. Ricciardo’s demise promoted Alonso to fourth, once he had passed Hulkenberg. Button was over half a minute behind, but behind him the skirmish between the Williams drivers had escalated to full-blown warfare, though it was conducted mainly on the radio instead of on the track.

Having early been told to stay behind Massa, Bottas was given the all-clear to pass his team mate in the closing stages while Massa was ordered to make way for his team mate.

Among the many instructions to Massa telling him to move aside, one of them – “Felipe you’re slower than Valtteri, let him past” – bore more than a passing resemblance to the infamous “Fernando is faster than you” of three-and-a-half years ago. But unlike then, Massa was in no mood to obey. He stood his ground, and by the final lap Williams had relented, and told Bottas to stay where he was.

Magnussen was a distant ninth ahead of Daniil Kvyat, the rookie scoring for the second day in a row having made a neat pass on Gutierrez earlier in the day. He in turn held back two hobbled cars belonging to Romain Grosjean (his diffuser broke eight laps from the end but he registered Lotus’s first finish) and Raikkonen.

“They are bloody quick”

Hamilton’s cruise to victory looked ominous to Mercedes’ rivals. Halfway through the race he asked, as Rosberg had in Australia, whether he could be doing any more to guard against any reliability problems. There wasn’t, but even so he won comfortably and lapped over a second quicker than anything else that wasn’t a W05.

But Mercedes, he admitted, “looked nearly seamless already in winter testing, they are bloody quick, the package they have is very, very strong.”

Few can be in any doubt of that after their first one-two finish since the days of Juan Manuel Fangio and Stirling Moss. But which of their current drivers might follow in Fangio’s footsteps and take the title? With one win apiece, it’s game on between Hamilton and Rosberg.