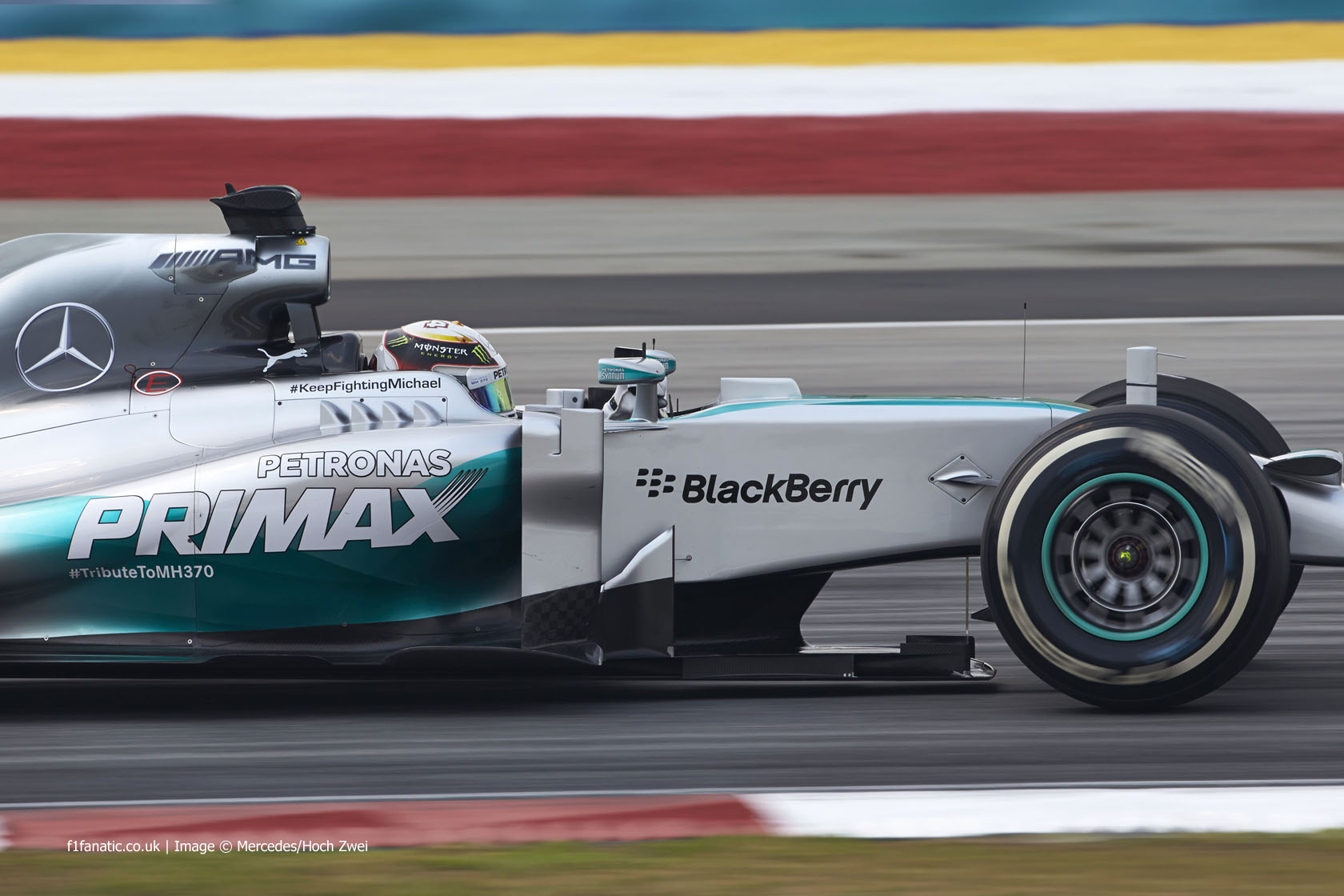 Lewis Hamilton put the disappointment of Albert Park well behind him in Sepang by dominating proceedings to take his first win of the 2014 season.

Nico Rosberg cruised to second to secure Mercedes’ first one-two finish in F1 since the Italian Grand Prix in 1955. Sebastian Vettel rounded out the podium to claim his and Red Bull’s first points of the season.

Hamilton led from pole, pulling a decent gap to team mate Rosberg in the initial stages as the German suffered from early rear tyre degradation. Kimi Raikkonen’s race was ruined after contact from Kevin Magnussen left him cruising back to the pits with a right-rear puncture. The Danish rookie later received a five second stop-and-go penalty for the incident.

After the first pit cycle, it was the two Mercedes leading the two Red Bulls – Vettel and Ricciardo respectively – with Fernando Alonso’s Ferrari keeping in touch with the leaders in fifth and Nico Hulkenberg’s Force India in sixth. Fuel saving became the focus of the second stints, as Daniel Ricciardo was told to target a gap of around two seconds to his team mate in fourth while Hulkenberg began to slowly close the gap to Alonso in sixth.

With the second round of stops completed, the order at the front remained the same. Vettel had closed the gap to the second-placed Rosberg, but the Red Bull could not get close enough to mount a challenge. Both Saubers were eliminated in almost consecutive laps with apparent mechanical issues.

It was at this stage that drivers first began reporting spots of rain around the circuit, but it was not enough to factor into the strategy of the race and the circuit remained dry for the remainder of the event.

Then, disaster for Ricciardo. Pitting for the third time, the Australian was released with the left-front wheel not secured to the car and forced to stop in the centre of the pit lane while the team recovered the car, costing him an enormous amount of time. There were further problems once the Australian was back out on circuit, as an apparent front wing failure left Ricciardo cruising back to the pits with a right-front puncture.

With only Vettel to provide the illusion of a challenge, the two Mercedes ticked off the remaining laps to cruise to what could well be the first of many one-two finishes of the season. Vettel took his first podium of the season in third.

Hulkenberg gambled with a two stop strategy, but it failed to win him fourth from Alonso, who caught and passed the Force India with four laps to go. Felipe Massa was told by the Williams team to let Valtteri Bottas through for seventh position, but the Brazilian refused to let his younger team mate passed with the team ultimately telling both cars to hold places in the final laps.

Jenson Button finished sixth, with Magnussen recovering to ninth and Daniil Kvyat rounding out the points in tenth to take two points finishes from his first two grands prix. After Marussia took a 13th place finish in Melbourne, Caterham will be delighted to have both cars at the chequered flag at their home race with Kamui Kobayashi taking a vital 13th place finish for the team.