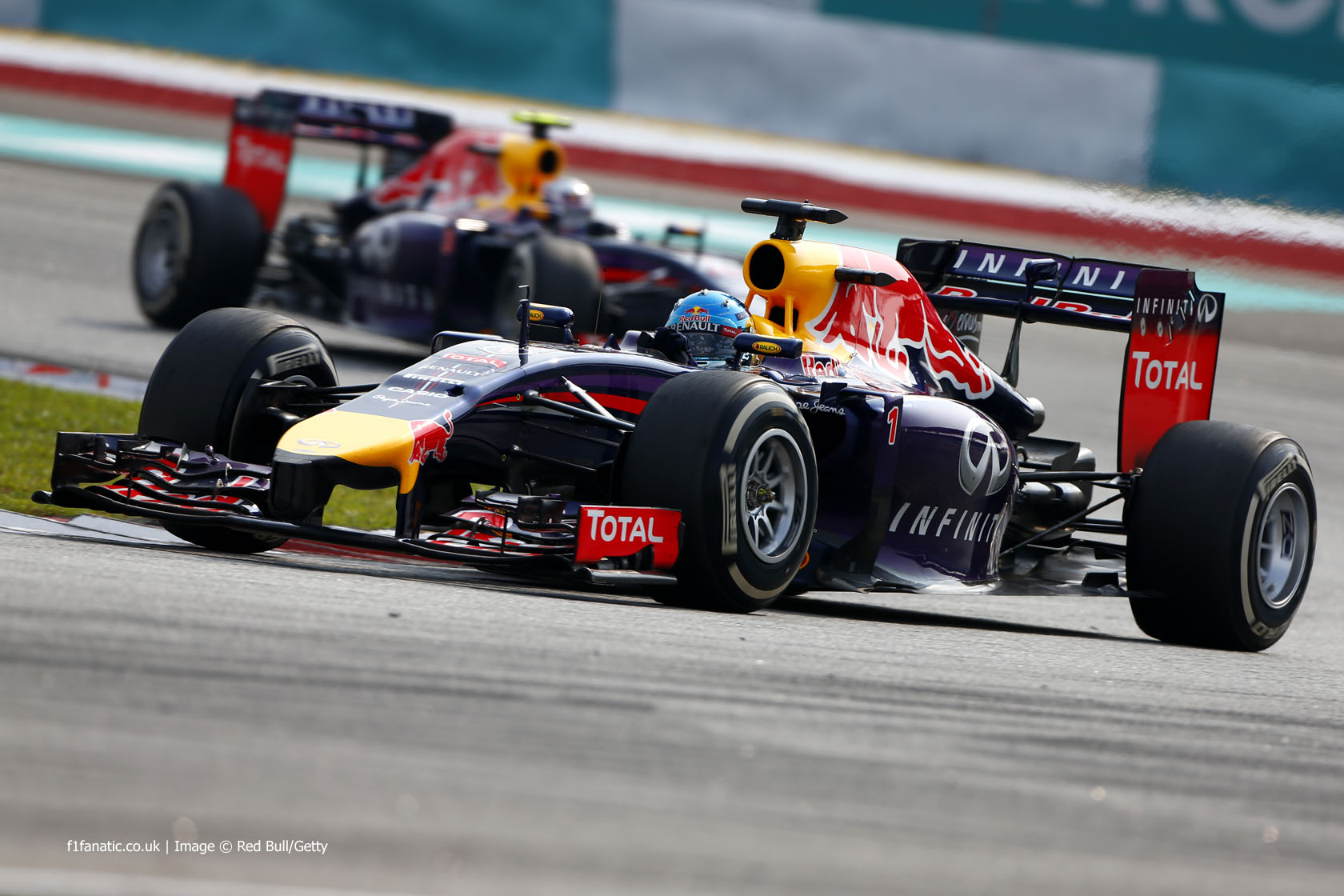 In the round-up: Sebastian Vettel believes Red Bull have made larger strides forward in the development race than Mercedes at this stage of the season.

Vettel: “We can see that the others, especially these guys [Mercedes] are quite a bit ahead, a little bit quicker than us and always have enough in hand to respond. At the moment, though, it looks like we are making bigger steps than them and let’s hope it continues like that.”

Rosberg: “I had a really good start, so I was happy about that because it’s not so easy this year. So it’s very difficult to get it right – but it felt great and got away well and then Sebastian, I thought he was going to put me right into the wall, but he stopped just before – so thank you for that!”

Button: “I don’t think the high speed here and the heat worked for us but there is no getting away from the fact that we are weak in high speed. We do have strength and that’s why we are able to keep teams behind us but at speed we have got a lot of work to do.”

Lewis Hamilton Q&A: All our hard work paid off (Formula1.com)

Hamilton: “It was pretty special to win this race. In the past I’ve always had a difficult time here in Malaysia. It was never that the pace was not there – it simply never went my way. So today: what a great feeling.”

Something NOT about a head injury! (A Former F1 Doc Writes)

“I needn’t go into ANY detail about why this regimen of starvation and dehydration is ridiculous from a medical point of view. This has got to stop. And it’s got to stop now. And given the competitive pressures of the sport, this will not be easy.”

Williams having financial problems according to Todt (GrandPrix.com)

Todt: “I am worried that we will lose teams. Many are crying out for help, and our job is to listen to these cries. Formula one is in intensive care and time is running out — by the end of June, a solution to this problem must be found.”

“Bernie Ecclestone brought together Donald Mackenzie, the affable but publicity-shy head of F1’s owners CVC, and Christian Horner, the Red Bull team principal whom he has nominated as his preferred successor.”

“Formula One bosses have been savaged on Twitter for holding “the worst minute’s silence ever” before the Malaysian Grand Prix to remember the passengers on flight MH370.”

Dear BBC, I think this would be pushing it even if I still presented your #F1 coverage… pic.twitter.com/UDNKDa2mGv

Big shout out to our pit crew today after best pitstop performance yet:breaking Williams' record 5 times in the race! pic.twitter.com/KBr0RvyGUw

Take the first letters of the Fuel Flow Sensor and put them together…what do you get? Yup, RIC’s reaction to the sensor failure!!! #F1 ;)))

It was not a good day !! But i believe tomorrow will be much beter … I dont give up and lets fight !!!

Dining at the hotel and ready to get some rest. Today, as always at Sepang, we lost a great amount of water. 2.8kg out..;) #Goodnight

Enjoying dinner & a after work/10 points beer now✌️! Tmrw morning off to the middle east! pic.twitter.com/4cXH5af861

Feeling incredibly happy! The whole team have worked so hard so thanks goes to them! This win is for those affected by the tragedy of MH370

After Daniel Ricciardo received a 10-place grid drop for the next race in Bahrain following his disastrous third pitstop, @Rigi believes that a harsh punishment for such incidents is the correct approach for the FIA to take.

It’s a shame about it being Ricciardo, who is a great driver but just very unlucky at the moment. But I see it this way; pit stop safety is very important. I’ve been at the Nurburgring race last year, and when Webber’s tire hit the camera man I was shocked because I genuinely thought that guy might’ve just died live on television. I do not wish to see this again, and any penalty for infringements during pit stops is, in my opinion, very justified.

Punishing Red Bull only instead of Ricciardo? How? A £20’000 fine won’t really matter in a £200 mil budget. In my view, there is no way to punish a team properly in a way in which the driver won’t be affected. It’s not the drivers fault, one may argue.. well, the driver is a member of the team just like lollipop man and the cook of the motorhome are. So if a team gets punished, the driver should be punished a swell. The way the FIA runs penalties for pit stop infringements is good and I sincerely hope they stand by it.
@Rigi

Jean Alesi broke his neck when he crashed his Ferrari while testing at Mugello on this day 20 years ago. His C2, C3 and C4 vertebrae were damaged in the accident at the Arrabbiata corner.

Doctors at the track initially failed to diagnose the injury, which was only discovered after Alesi’s mother told him to go to hospital for an X-ray. He was forced to miss the Pacific and San Marino Grands Prix while he recovered.