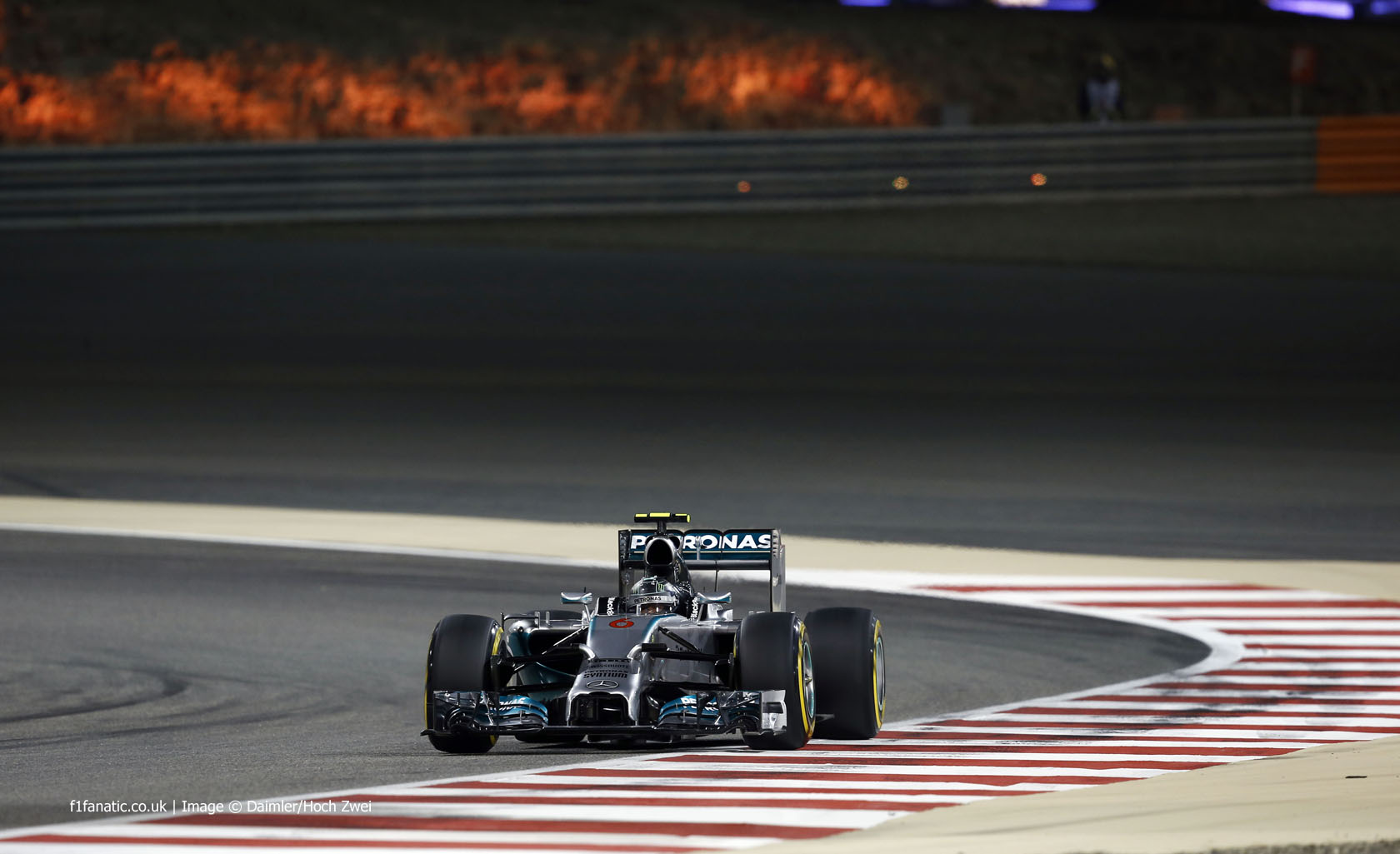 The momentum was with Lewis Hamilton going into qualifying for the Bahrain Grand Prix as he led all three practice sessions on the desert track.

But team mate Nico Rosberg beat him to pole position and will start first for the second year in a row in Bahrain. Mercedes locked out the front row for the first time the year.

Daniel Ricciardo took third for Red Bull but will be moved back due to his grid penalty.

Q1 was the first session of the weekend which did not end with both Mercedes drivers on top of the times. Nico Hulkenberg led the way for Force India, setting a 1’34.874.

But there was little doubt Mercedes were capable of going much quicker. Will most drivers used a set of the much faster soft tyres to reach Q2 the Mercedes pair only used the mediums.

So did Daniel Ricciardo, though unlike the silver cars he needed two runs to ensure he got through. Sebastian Vettel, however, was unable to beat the Mercedes drivers’ times even with the soft tyres.

Pastor Maldonado was knocked out in the final moments of the session by Romain Grosjean. Just nine-thousandths of a second separated the two Lotuses.

All weekend long Rosberg had trailed Hamilton in every session. But he gave his team mate a wake-up call in second practice, heading the times with a 1’33.708, almost two-tenths of a second quicker than Hamilton.

The pair only needed to run once in Q2 – using the soft tyres they will start tomorrow’s race on.

Ricciardo was third-fastest for Red Bull but team mate Sebastian Vettel didn’t accompany him to the top-ten shoot out. The world champion had a gear shift problem on his first run which got worse before his second.

Vettel missed the last place in Q3 by six-hundredths of a second, losing out to Kimi Raikkonen. But the gap between the Williams drivers was even narrower – the pair set identical times to within a thousandth of a second.

Both Toro Rossos failed to make the cut and for the first time this year it was Sergio Perez,not Nico Hulkenberg, who reached the top ten shoot-out for Force India.

Rosberg carried the momentum into Q3 and increased his margin over Hamilton with his first run. A 1’33.185 put him almost three-tenths of a second clear of his team mate, who ran wide at turn eight on his first run,

That left Hamilton with one chance to beat Rosberg to pole position. But his final effort went wrong at the first corner – he locked up at turn wide, ran onto the run-off, and Rosberg’s race engineer got on the radio to tell him pole position was his.

Mercedes have enjoyed an advantage of around a second over their rivals for most of the weekend, so it may have come as a surprise to find Ricciardo within seven-tenths of a second of them in third place. But his ten-place grid penalty from Malaysia guarantees he will start much further back.

Valtteri Bottas will be promoted in his place, the Williams driver finally delivering on the car’s potential in the fist dry qualifying session this year. Sergio Perez will be promoted alongside him on the second row.

The highest Ferrari on the grid belong to Kimi Raikkonen, who beat Jenson Button by less than two hundredths of a second.

The other Ferrari of Fernando Alonso ended the session tenth behind Massa and Magnussen.

92 comments on “Rosberg turns tables on Hamilton for Bahrain pole”