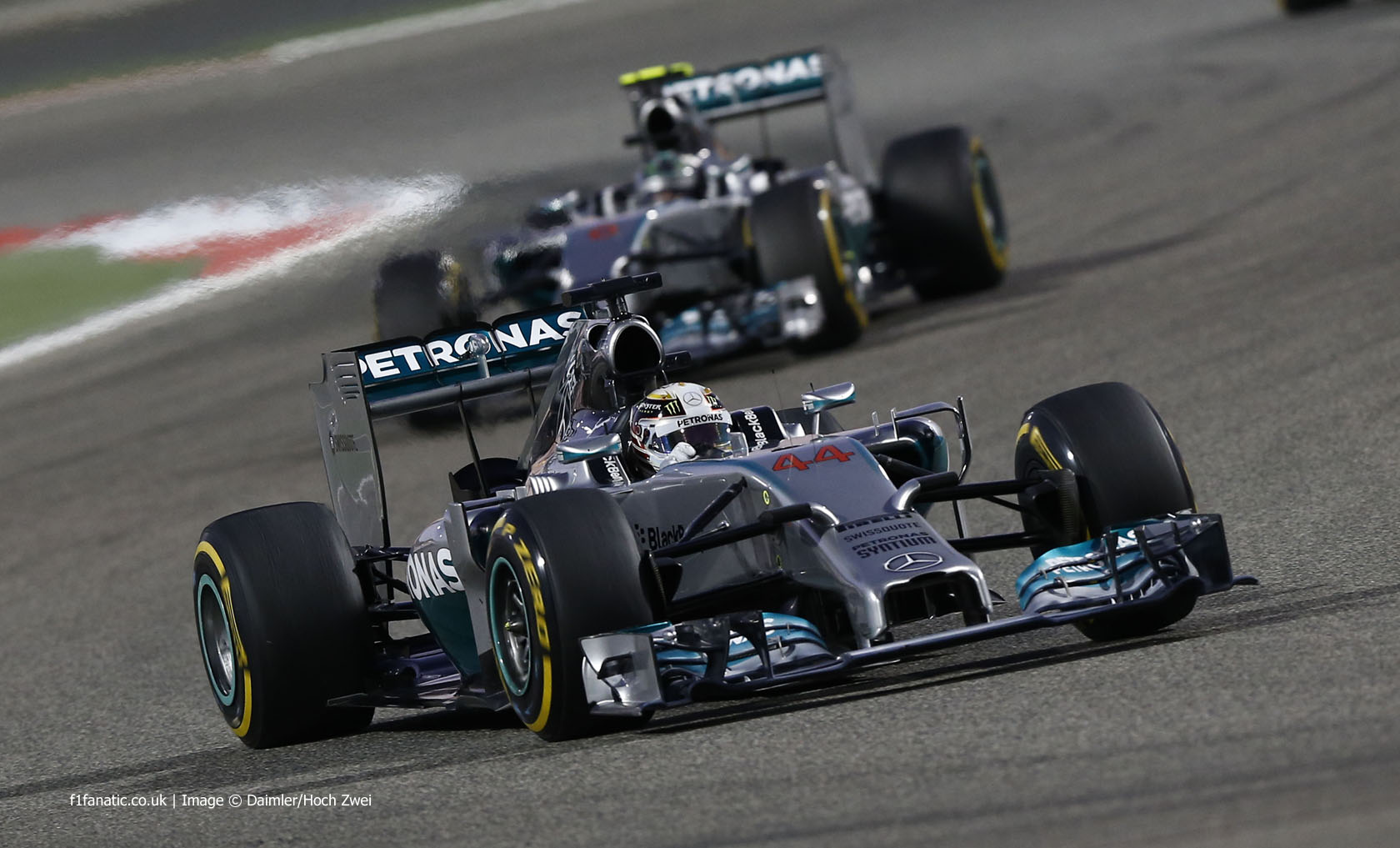 In a race filled with overtaking and suspense, the two Mercedes drivers fought for victory in a close battle that saw Hamilton holding off Rosberg despite being on the slower Medium tyres.

Sergio Perez claimed third to secure only the second podium appearance for Force India in the team’s history, after holding off a hard-charging Daniel Ricciardo in the Red Bull.

A frantic start saw Hamilton jump his team mate on the run to the first corner, but Rosberg did not want to yield the lead too easily and tried a bold move around the outside of turn four, only to be squeezed off the track by Hamilton on exit. Felipe Massa made a superb start from seventh place in the Williams to leap into third position.

Nico Hulkenberg caught and passed Fernando Alonso’s Ferrari for seventh, before snatching sixth from Valtteri Bottas on lap 10 after Jenson Button dived past the Williams into turn one. Just two laps later, Sergio Perez frustrated Williams further by robbing third place from Massa on the exit of turn four.

The first round of pitstops saw heavy competition between Hulkenberg jump ahead of his team mate, while Bottas successfully undercut his own team mate. Sebastian Vettel allowed team mate Daniel Ricciardo past after complaining to his team that his DRS was malfunctioning.

Suddenly on lap 18, Hamilton came under intense pressure from his team mate with Rosberg diving down the inside of turn one. After a dramatic sequence of two laps with the leading Mercedes dicing for position, Hamilton was ultimately able to fend off his team mate before both cars were called in to the pits. Hamilton was given another set of Soft tyres while Rosberg was placed onto the harder Mediums.

Meanwhile, the battle between Force India and Williams was also heating up. Bottas led a train including his team mate, Hulkenberg and Perez. The Mexican took advantage of Bottas holding the three of them up to pass his team mate, before both Force Indias forced their way passed Massa on lap 28 after Bottas pitted for the second time.

The mixture of two and three-stopping cars provided plenty of action in the middle stage of the race. Bottas almost ran into Kimi Raikkonen at turn one, as the Ferraris found themselves under constant attack from the Red Bulls and Williams. With the advantage of the Soft tyres, Hamilton pulled a gap of over 13 seconds to Rosberg in second.

But on lap 41, the race took an even more dramatic turn when Esteban Gutierrez’s Sauber was sent into a violent roll at turn one by Pastor Maldonado’s Lotus, bringing out the Safety Car. Suddenly, the advantage Hamilton had built up over his team mate on the Soft tyres was eliminated, leaving him facing a ten lap challenge to hold off Rosberg for the victory on the slower compound. Mercedes’s Paddy Lowe was heard warning both drivers to “bring both cars home”.

But Lowe’s calls appeared to fall on deaf ears as, at the restart, Rosberg immediately put Hamilton under pressure for the lead while Hulkenberg challenged his team mate for the final podium position. While there were no changes of position at the front, Ricciardo charged past his world champion team mate for fifth place.

With six laps to go, the fight for the win between the two Mercedes ignited again with Rosberg challenging his team mate once more. But Rosberg was unable to retake the lead and it proved to be as close as the German would get to his team mate.

Having passed his team mate, Ricciardo dived past Hulkenberg for fourth before trying in vain to catch Perez for the final podium spot. After such a promising weekend, Williams will likely be very disappointed to have crossed the line in seventh and eighth while Ferrari will not be happy to have rounded out the points in ninth and tenth.