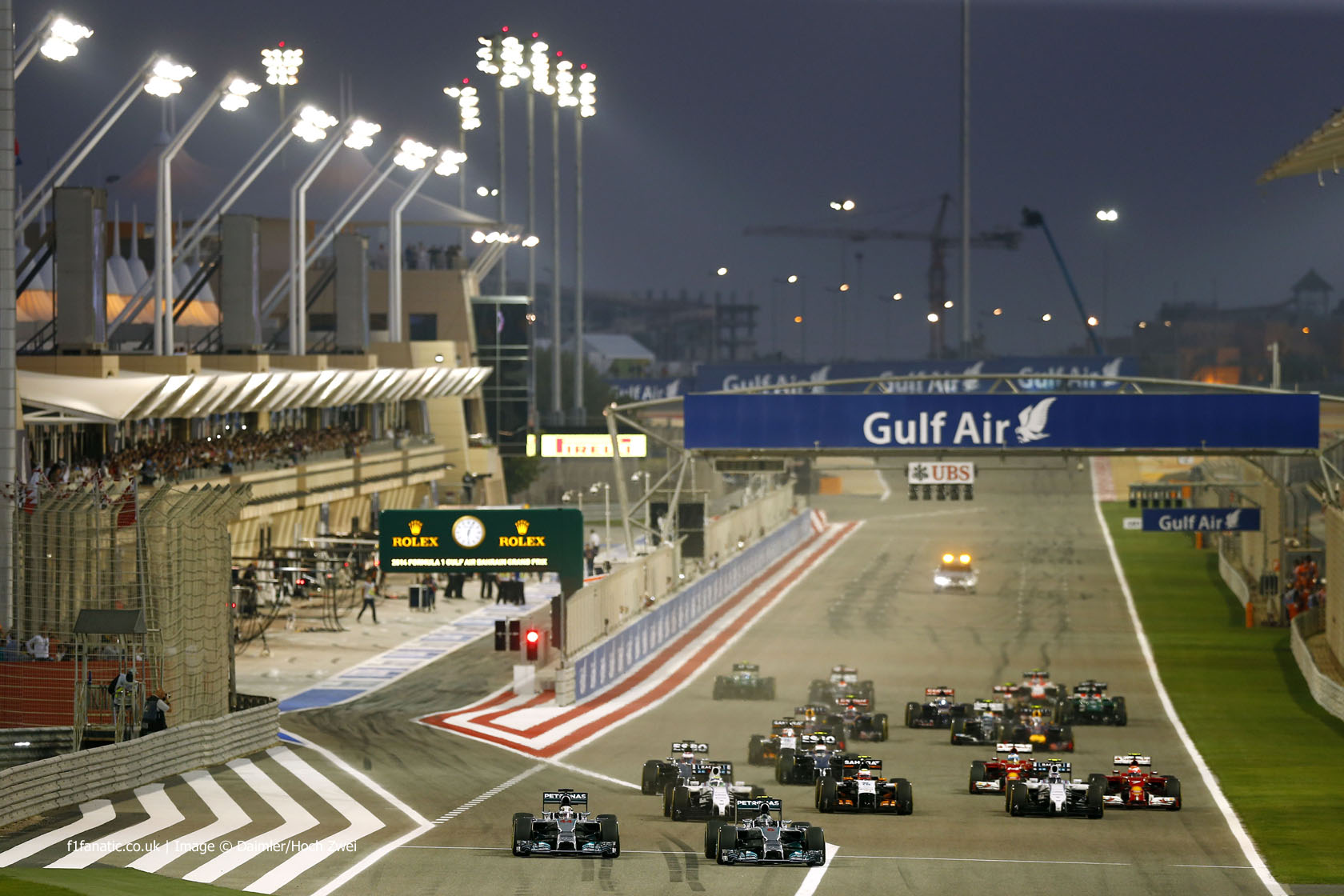 Sebastian Vettel – For the second time this year technical problems with his car during Q2 hindered his attempts to get into the final ten, as did his spin at turn two during final practice. Gambled on using medium tyres for his first stint and gained ground despite a DRS glitch and poor straight line speed (though his was higher than Alonso’s). Let Ricciardo past when ordered to, got back ahead of him then was passed once more after the Safety Car period, ending up sixth.

Daniel Ricciardo – Qualified a surprising third, then was relegated ten places by his Malaysia grid penalty. After passing Magnussen he lobbied the pit wall for help getting ahead of Vettel, which was granted, though he dropped back behind during the pit stops. But having got his medium tyre stint out of the way mid-race he re-passed Vettel after the Safety Car period, helped himself to another place from Hulkenberg and was poised to strike at Perez when the chequered flag came don, taking fourth. Nico Rosberg – Having lagged behind Hamilton in practice Rosberg seized the initiative in qualifying, taking pole for the second year in Bahrain. He had the pace to win from there but Hamilton got ahead at the start and try as he might Rosberg just couldn’t make a move stick, even with the benefit of softer tyres in the final stint.

Lewis Hamilton – Headed every practice session and looked a sure thing for pole when qualifying began. But wasn’t as comfortable in his car when the competitive sessions began and two mistakes in Q3 let Rosberg in for pole. Hamilton made a better start, however, and by parrying each and every one of Rosberg’s attacks he pulled off a remarkable win.

Fernando Alonso – As expected the Ferrari wanted for straight-line speed in Bahrain but Alonso seemed particularly vulnerable in the race, giving away 13kph to his team mate and 21kph to the Mercedes. A gradual loss of power throughout qualifying left him ninth on the grid, and although a rapid start moved him up to seventh he was soon demoted by Hulkenberg. Was grateful for the chance to save fuel afford by the Safety Car period, and crossed the finishing line back in ninth place, one arm aloft.

Kimi Raikkonen – Lined up fifth on the grid but never lapped inside the top six. It didn’t help matters that he was hit by Magnussen – again – on the opening lap. “The lack of aero downforce and speed on the straight meant overtaking was complicated,” he said, after following his team mate home in tenth. Romain Grosjean – Narrowly beat Maldonado into Q2 and although he fell back at the start he was quickly able to pass the Caterhams and Bianchi. Was having a good race with Gutierrez until his team mate took him out of the equation, and brought the car home 12th, pleased at his first trouble-free weekend of the year.

Pastor Maldonado – Posted his first finish for Lotus but was fortunate to make it that far after crashing into Gutierrez while leaving the pits after his second stop on lap 39. Blamed Gutierrez for the collision but few saw it that way, least of all the stewards, who issued a trio of penalties including a three-point licence endorsement.

Jenson Button – Took sixth on the grid, saying the team had “done a more or less perfect job” up to that point. The race began promisingly and had it not been for a clutch failure on his car Button reckoned he could have passed the Force Indias for third.

Kevin Magnussen – Lost vital ground at the start by making contact with Raikkonen and never really got back into the race from there. Also retired with a clutch problem. Nico Hulkenberg – Said failing to get beyond Q2 was his own fault after running wide at turn 11, losing several tenths of a second. But he quickly made up for it after the start, gaining three places on lap one and then passing Alonso. He lost out to Perez while scrapping with Massa, and an attempt to claim the position back after the Safety Car period didn’t work out. Ricciardo then bumped him down to fifth before the end of the race.

Sergio Perez – His first start for Force India in Australia was ruined on lap one and he didn’t even make it to the start in Malaysia. But it was third time lucky for Perez, who after taking fourth on the grid was disappointed he wasn’t closer to the front. Brake warm-up had been a problem for him in qualifying and it was at the start as well, where he locked up heavily at turn one. But from there he took the fight to the Williams drivers, passing Massa twice to gain the track position he needed to make a two-stop strategy work. He put one over his team mate as well, which proved valuable at the end of the race when he had just enough in hand to claim his first pole position since 2012.

Adrian Sutil – Picked up his first penalty points of the year by impeding Grosjean during qualifying. Having failed to make it out of Q1 he was then relegated to last place. In the race he was the victim of some questionable driving by Bianchi, the pair making contact and turns one and four as the Marussia driver tried to pass. “He was driving aggressively for the whole race and pushed me off at the start,” said Sutil. “With his move he destroyed mine as well as his own race.”

Esteban Gutierrez – Out-qualified his team mate but looked set for an afternoon scrapping with the Lotuses outside of the points positions when he was hit by Maldonado. A hospital visit was required after his Sauber flipped over but he was given the all-clear.

Jean-Eric Vergne – Said Maldonado’s driving was “absolutely mental” when they tangled on the first lap, adding “that guy tried to kill me” as he made his way back to the pits. The damage ruined his race, as he explained afterwards: “I got squeezed more and more and when he realised I was about to overtake him anyway, he just closed the door. That is why our wheels touched and my car took off, out of control. Both rear wing and floor got heavily damaged with a huge loss of aero performance and it was just not possible to continue my race.” Before the race began he revealed he’d gone to hospital between the first two races of the year as a result of trying to reduce hid body weight to compete with his lighter team mate.

Daniil Kvyat – Believe he could have made it into Q3 but didn’t make the cut and the story of his race was similar – he finished 11th, just outside the points. Felipe Massa – A blistering start from seventh on the grid had him up to third by turn one. But the Williams was asking too much of its rear tyres and Massa found himself under increasing pressure from the Force India drivers. Even without the Safety Car period he was likely to drop behind the Red Bulls, and leaving his medium tyre stint to last reduced his chances of overtaking them.

Valtteri Bottas – Out-qualified Massa but was harder on the tyres than his team mate and ended the race looking at his rear wing again.

Jules Bianchi – A pair of rash moves on Sutil spoiled his race, though he blamed his rival for the contact: “I had the chance to get ahead of him and I was slightly ahead going into turn one, but he turned in on me and crashed into me, which punctured my left rear.” The floor damage and loss of time ensured he wouldn’t play a role even in the battle for the lowest positions.

Max Chilton – Notched up his 22nd finish and took 13th place, helping Marussia to retake tenth from Caterham in the constructors’ championship.

Kamui Kobayashi – Looked racy in the early stages of the race but even after the Safety Car period he still needed to conserve fuel which kept him from attacking in the final laps.

Who was the best driver of the 2014 Bahrain Grand Prix weekend?