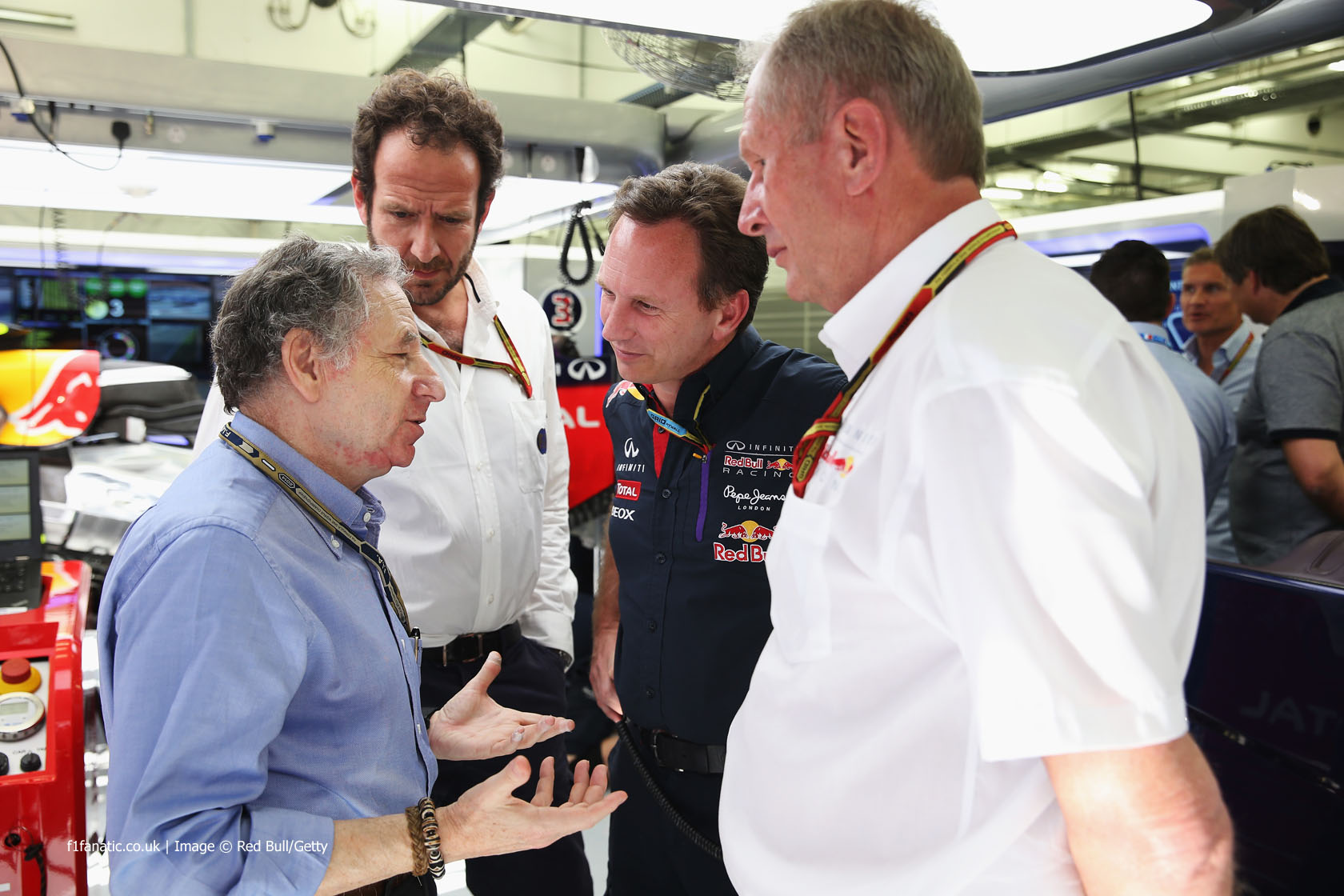 In the round-up: Jean Todt admits that the FIA will not enforce a budget cap in 2015 as originally planned.

Todt: “Most of the teams were in favour of the cost cap, but I understand that all the teams that are part of the Strategy Group are against it now. So clearly, if the commercial rights holder, and if six teams, which means 12 of 18 are against, I cannot impose it. It’s mathematics. So in this case, no more cost cap.” “After a series of meetings over the Bahrain Grand Prix weekend to discuss the current state of F1, Autosport understands that unanimous agreement was reached for action to be taken regarding the noise. A working group is to be set up by the FIA to look into the matter, with a view of making sure that the turbo noise can increase as soon as possible.”

Dennis: “There has to be a time, and I think that time is now, when we take a more socially-responsible position. The simple fact is that we live in a world where resources are depleting and the environment is being threatened. Yes, we are Formula 1, yes we are the pinnacle of motorsport, but being the pinnacle of motorsport means we have to have the latest technology”

‘We were not good enough – Vettel (ESPN)

Vettel: “It’s a shame we couldn’t get further up because Daniel proved there was a little bit more to get. I couldn’t really get to that bit so I’m not happy with my day. For some reason we seem to be very slow down the straights, and not just against the Mercs. We pushed hard… but obviously we were not good enough today.”

Mallya: “It is a very special moment. My job was always to make this team climb up the ladder – steadily. I always believed that 2014 – with all the new regulations – gave us a new opportunity. And so far what a good season it has been!”

Button: “The only team that was quicker than us today was the Mercedes, Force India was obviously competitive, but I think we would have fought them very well at the end but we didn’t get the opportunity.”

“Meanwhile the Haas Automation entry could utilise Ford branded Cosworth engines, the English firm has recently opened a new office in Detroit and developed its own power unit for the 2014 season, but refused to put it into production without [an original equipment manufacturer] partner.”

“One wonders why Ferrari and Red Bull are suddenly so concerned over the opinions of the fans, when every poll conducted in the independent domain over double points repeatedly sees well over a 95% dislike of the rule, and yet they have not seen fit to push for its eradication.”

Media scrum around Luca Di Montezemolo sounding off about F1 noise. Ironic that his words were sometimes drowned out by GP2 engines.

Bernie also said there should be extra fuel allowed. What a surprise? Not a great advert for the manufacturers pushing for that idea…

Colin Hessey leaving the race team and going factory based after 25 years (and 3 races) of service. Thank you Colin. pic.twitter.com/O2FL6RRX4n

I'm bored and it hasn't even started yet.

Look after your tyres. Save fuel. Drive slowly. Be careful.

I take it all back. Despite the tyre and fuel conservation issues, it was a tremendous motor race.

"It was a great battle out there tonight with Lewis: this kind of race is exactly why I am in #F1!" @nico_rosberg pic.twitter.com/vbD9QbXj5P

We add another page to the history of our team. Belgium 2009, Bahrain 2014. What an amazing race! #FeelTheForce

That was a pimpin good time

If this is the template for the rest of the season, I say bring it on. Formula 1 in crisis? Yeah, right.

Lauda: This race has shown that all this bullshit that was talked about racing in general is rubbish. #F1

With yesterday’s thrilling Bahrain Grand Prix set to become one of the most popular races ever on ‘Rate the Race’, jonny705 feels that despite the drama, it wasn’t quite deserving of a full ten out of ten…

I think people are getting slightly carried away with the rating, probably (and understandably so) because it’s been so long since we’ve had any real battle for the lead and such brilliant drama up and down the field.

But it’s almost as if we’ve forgotten how good F1 can really get.

This was a Grand Prix jam-packed with action, tension, drama from start to finish. Team mates flouting the pleas of their superiors, two different approaches to strategy that kept us guessing throughout the race’s entirety, and a spectacular crash that hopefully sends a message to the FIA that changing the shape of the noses won’t deny us fans the occasional amazing sight of a flying/flipping/barrel-rolling car. You can’t ask for much more.

But was it as good as Brazil 2012? Not quite. Plenty of on-track drama, but it lacked that extra spice – a championship wasn’t at stake, and final-race showdowns will always have that added bit of tension (or at least they did before they messed with the points).

Was it as good as Canada 2011? Nowhere near. That is the definition of a race that had pretty much everything you could ask for.

A 10/10 race is one where you get a special feeling inside, one that tells you that you’ve just watched something very special. Think long and hard, did you get that feeling as Hamilton crossed the line? If the answer is yes, you need to go and watch one of the two aforementioned races. If not, it’s because this race was a very good 9/10. Excellent Grand Prix, but to make it a 10 it needs something truly sensational – a driver coming back from nowhere, for example.
jonny705

McLaren won their second race in a row at the start of the 1984 season 30 years ago today, Niki Lauda leading home team mate Alain Prost at Kyalami. Derek Warwick was third for Renault, a lap down.