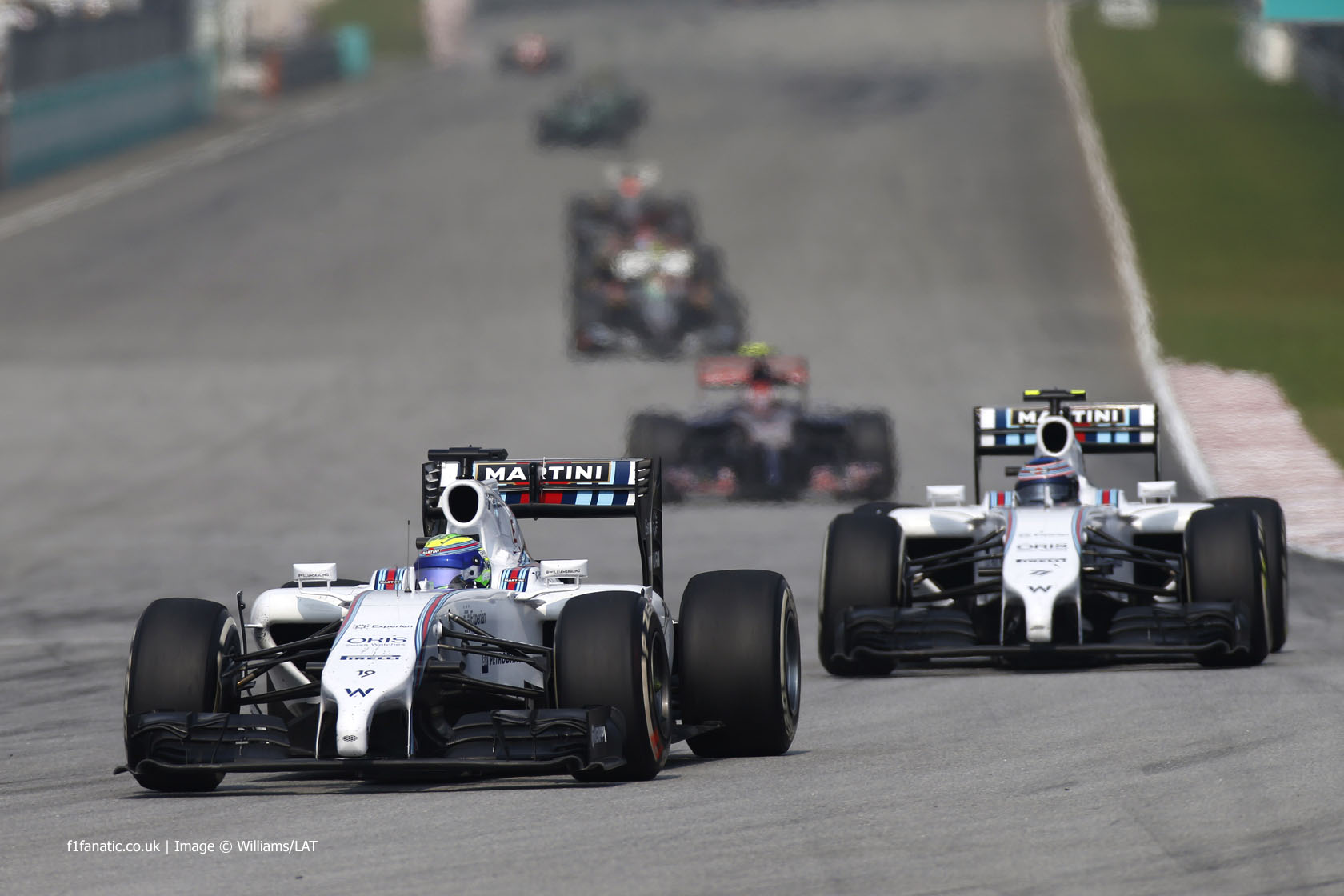 In the round-up: Claire Williams says there will be no repeat of the row over team orders which occurred in Malaysia.

Some exciting news for me – I’m going to be commentating on the opening races of the new Formula Renault 3.5 season this weekend. I’ll be on BT Sport alongside lead commentators Ben Evans.

It’s a brilliant championship to be involved in, one which has promoted the careers of talent like Sebastian Vettel, Daniel Ricciardo, Kevin Magnussen and more.

Here’s details of when and where you can catch this weekend’s races: Back at the sharp end – Q&A with Claire Williams (F1)

“I think Felipe thought that he was going quicker than Valtteri, so he thought ‘okay, go and try to overtake me!’ Fine – that’s fair enough to me. But we talked it over after the race and we now have procedures in place for such a situation that we have all agreed to. Such a situation will not happen again.”

Fernando Alonso: “[Luca di Montezemolo] came on Sunday morning and we worked together in my room for ten minutes. We tried to put together everything we found in the first two races and what will be the next steps coming from the performance side and the car, with maximum pushing and maximum dedication from everyone in the team.”

“The test is very important. We have a very aggressive programme, which we need as our rivals will not just be sitting back and watching.”

Niki Lauda on the critics: “I’ll just tell them to get lost…” (Adam Cooper’s F1 Bog)

“It was very good, a perfect race, and it couldn’t have been better. It was the best race that has happened this year, so whoever complains about it, I’ll just tell them to get lost, very simple.”

“It is not any one person who can decide. We have this group now that can sort this out. But at the moment no one knows what to do.”

“A home-made bomb exploded in a car in the centre of the Bahraini capital Manama on Sunday, the interior ministry said, as the kingdom hosted a Formula One motor racing Grand Prix.”

“Did anyone expect Daniel Ricciardo to be so good so soon? I doubt it. His smiling demeanour outside of the car turns to steel inside and his cool team radio message, when he was getting held up behind Vettel – ‘Guys, we’ve got to make a decision about what we are doing here…’ – was the mark of a racer who respects himself and not simply someone who is too grateful for the opportunity to sit behind and enjoy the view.”

“I read [Ferrari’s poll press release] with fascination, it was like a chapter from Suicide 101, explaining how to load a pistol and point it at one’s head. I even went to ask the Ferrari PR man if there was any possible logical positive strategy for such a ridiculous release. His argument was not convincing.”

It was looking like a strong weekend in Bahrain with a P6 start & running in P5 when we ran into clutch problems, gr8 race though, loved it.

Great to see @simdesilvestro has had her first F1 seat made. Rumours are she will soon test at Fiorana with a 2012 car for @OfficialSF1Team.

Ah, so that's what Alonso and Raikkonen were trying to do: @InsideFerrari @alo_oficial #F1 #Ferrari pic.twitter.com/Joils4h6vl

@GeeMac’s thoughts on how Nico Rosberg reacted to his defeat at the hands of his team mate on Sunday.

Nico Rosberg’s demeanour after the race on the podium and in all his post-race interviews was pretty telling.

He seemed to be pretty irritated, initially I thought that would have been at the team or Hamilton, but the more I think about it, it has to be at himself. He had all the tools to win (the quicker tyre, DRS, no team orders) and yet he couldn’t get the job done.

People said that Malaysia was a big psychological boost for Hamilton, I have to think that Bahrain was even more so.
@GeeMac

And happy birthday to 1997 world champion Jacques Villeneuve who is 43 today. Villeneuve will compete in the Indianapolis 500 and selected rounds of the World Rallycross Championship this year.