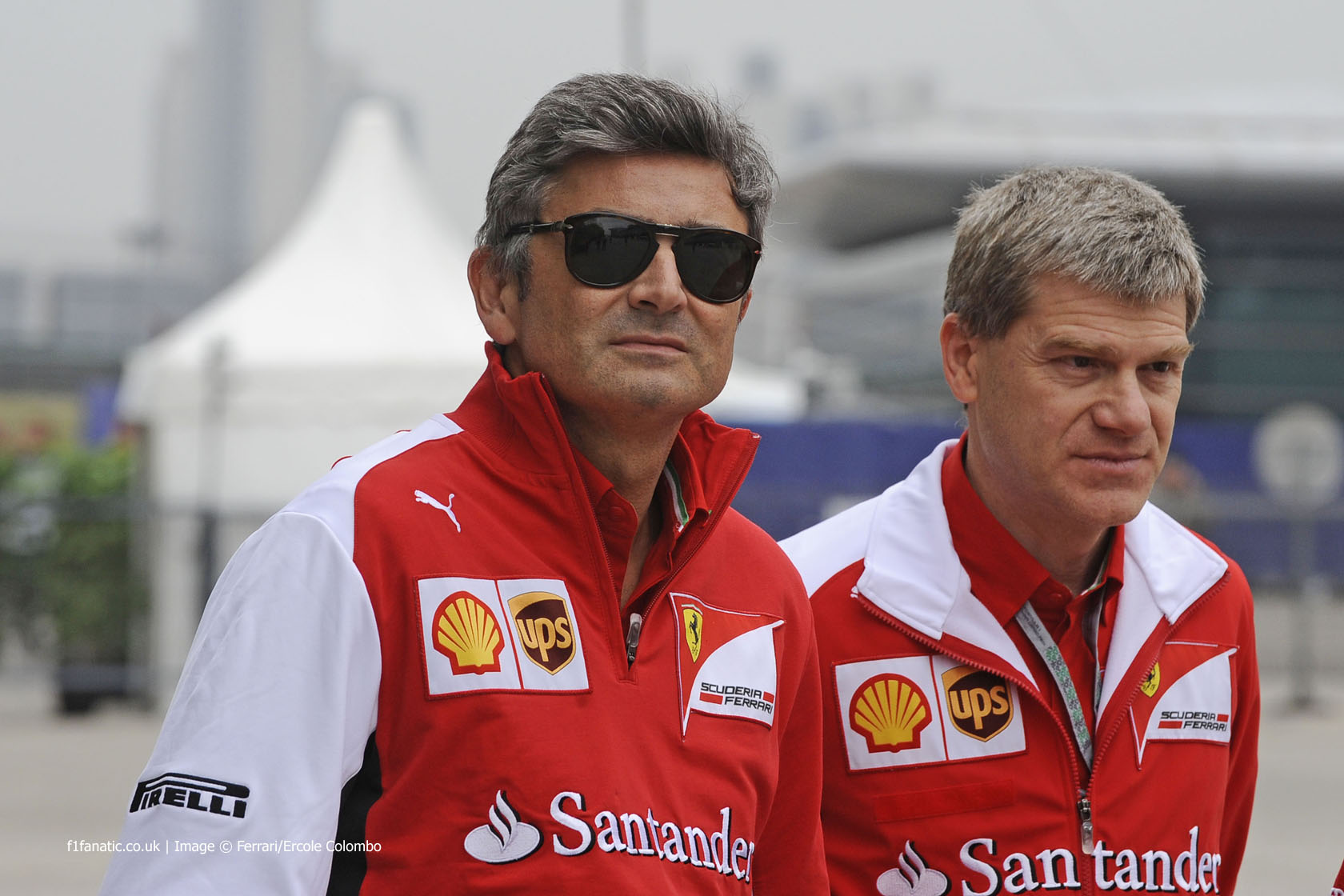 New Ferrari boss Marco Mattiacci will be on pit wall for first practice, starting in 30mins

There were plenty of Brazilian flags in the grandstands to support Williams, with Felipe Massa and test driver Felipe Nasr on driving duties in the morning session.

A bit of love from Brazil in the grandstand this morning too! #FP1 pic.twitter.com/X6lVQ004OW — WILLIAMS RACING (@WilliamsRacing) April 18, 2014

Kvyat: “Gearbox upshift is harsh.” #F1 Matassa: “OK gearbox is harsher but faster so you live with that.” Kvyat: “OK.” #F1

A few drivers struggled on the cold and green track.

When Vettel sat down for his press conference in China, he was overwhelmed by so many pressmen. “I thought Multi 21 was last year,” he joked

Just bumped into Max Chilton in the Paddock. I swear, if that kid gets any thinner, the poor fellow will be see-through. Incredible.

Update on @LewisHamilton‘s car; it was a suspension issue this morning that limited running. Hoping to be back out in P2! #TheBeastGoesEast — MERCEDES AMG F1 (@MercedesAMGF1) April 18, 2014

After a spin in first practice, Maldonado crashed at the pit entry in the second session. The off was reminiscent of Lewis Hamilton’s in the 2007 Chinese Grand Prix.

And in the wall. But at least @LewisHamilton can sympathise with @Pastormaldo going off in the Shanghai pit entrance. pic.twitter.com/PEBpR4O62O

Rosberg: “Affirm. It’s hard to see.” Ross: “OK. I’m looking at the GPS, a car came into the pits which is why I was late with the clear.”

Pujolar: “Lap was quite good in sector 2. We lost a bit in turn two 2 the last corner. How was it?” Vergne: “Extremely difficult to drive.”

And that’s session complete for both drivers. P1 for @LewisHamilton and P3 for @nico_rosberg on the timesheets #TheBeastGoesEast

I am a big fan of @RenaultSportF1's Rob White, but bless him, brevity never was his strong point! #F1

.@FelipeNasr It’s another circuit learnt and more time in the car which is really valuable for me, although it was quite a challenge — WILLIAMS RACING (@WilliamsRacing) April 18, 2014

After the resignation of Ferrari Team Principal Stefano Domenicali on Monday, his replacement was on the pit wall for the first time.

New Ferrari boss Marco Mattiacci came across well in his first meeting with the F1 media. He’s well aware of the challenge he faces

Finally without the sunglasses! Kudos to the German Bild reporter who asked why he had worn them all day! #F1 pic.twitter.com/b1hHw5oPqJ — Jennie Gow (@JennieGow) April 18, 2014

Ferrari’s new boss Marco Mattiacci revealed he was wearing sunglasses because of the number of flights he’s been on this week. #redeye

Got lots of mileage in today which is good for us. Still working on the balance but happy with the race runs! #M4X pic.twitter.com/qJwoS3okWZ

Have gone for a blue visor this weekend as there isn't much blue sky here in Shanghai so I created my own blue sky!😉 pic.twitter.com/NKnpJgs70F