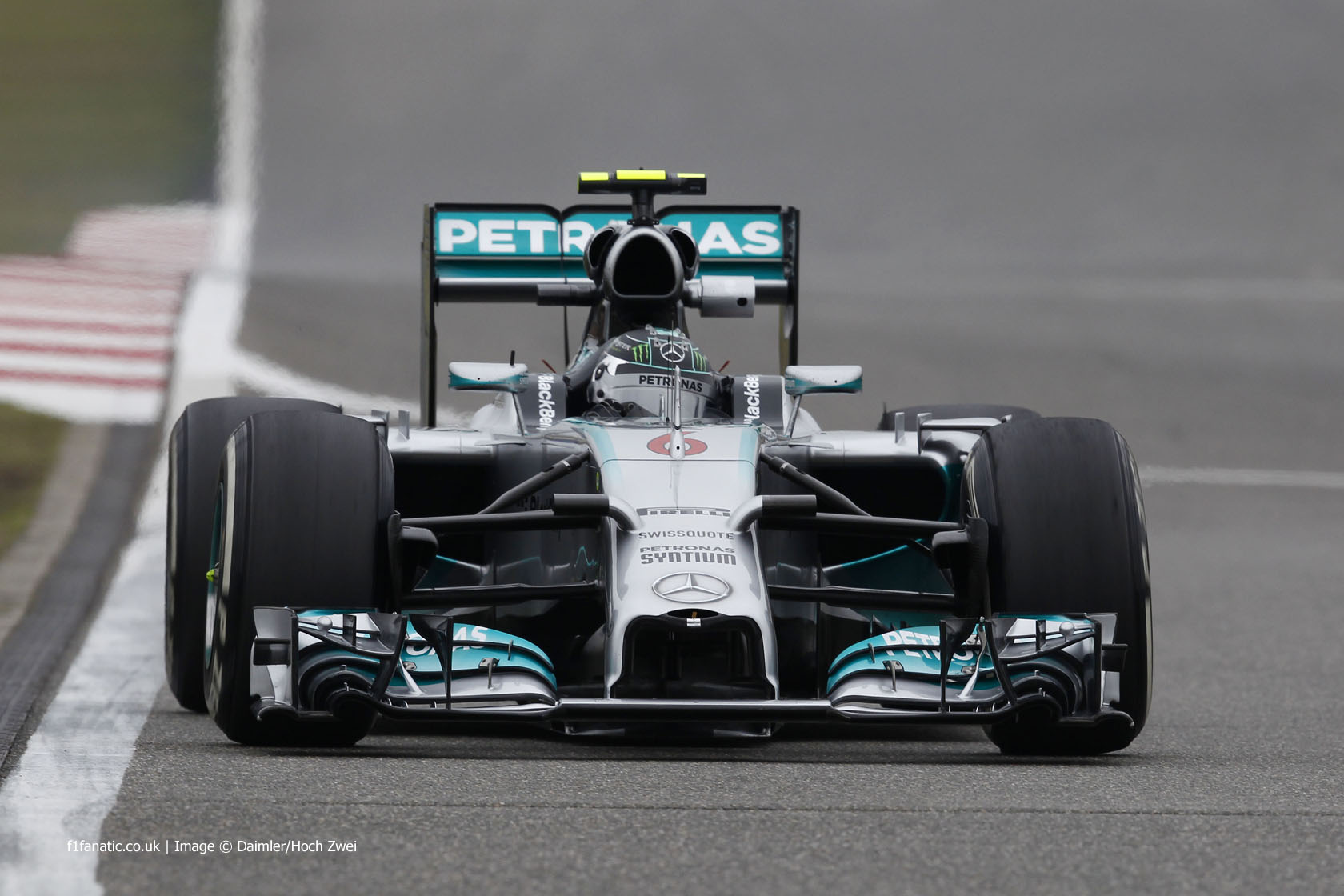 Lewis Hamilton is on pole position for the third time this year but the two Red Bulls will line up behind him on the grid.

Does Sebastian Vettel believe the Mercedes can be beaten? “I think if we put two chicanes in all the straights then yes,” he said in the press conference after qualifying.

Straight-line speed remains the major disadvantage of the RB10 and its Renault Energy F1 V6 turbo engine. On the blast to turn 14, where the drivers are flat-out for a whisker under 1.4 kilometres, it’s giving away 20kph (12.4mph) to the Mercedes.

Come rain or shine, that fact will make it very hard for the Red Bulls to take the fight to Hamilton. His biggest threat is more likely to be his team mate.

The weather forecasts have proved dependable so far this weekend and continue to indicate race day will be dry, though cloudy and still fairly cool.

That will be a disappointment to the Red Bull drivers, as wet conditions represent their best chance of challenging for victory. As noted yesterday, the green track surface produced by the rain will exacerbate the graining problems drivers have experienced.

The Mercedes cars get off the line as well as anything out there and with the run to turn one being fairly short Hamilton is likely to retain his advantage at the start. Having the experience of starting from pole position at this circuit three times before can’t hurt either.

The more significant question in terms of how the race will unfold – and whether we get a Bahrain-style thriller or a Malaysia-style snooze cruise – is how quickly Rosberg arrives on his team mate’s tail.

Can he get past both Red Bulls before the end of lap one? Will he need the added benefit of DRS to blast by?

The sooner he does, the greater his chances of being able to go after his team mate. Hamilton may have taken pole position and been quickest in practice, but Rosberg’s pave has been strong al weekend.

Keep an eye on Fernando Alonso as well at the start, as he often gets away quickly and he is anxious to stay ahead of the midfield battle on Sunday:

“Fifth place means I can start with the lead group and if I can stay with the leaders we can finish close to the podium,” he said.

“The opening laps will count for a lot therefore and we must try our absolute best to get a good start and to avoid battles, which in the last few races have seen us lose ground.” In a dry race, tyre strategy is likely to be influenced heavily by how teams experience the graining – and which tyres the problem is less acute with.

Even the Mercedes drivers were not immune to the problem, though the sheer pace of their cars should keep them safe from their rivals. Again, Red Bull are foremost among them, having run some impressive stints in practice.

Other drivers have ground to recover from surprisingly low qualifying places. That particularly goes for the two McLarens who line up 12th and 15th.

“We know our car is lacking in overall performance, but most notably it lacks sufficient downforce,” racing director Eric Boullier acknowledged.

“That’s always a significant problem in any conditions, of course it is, but it becomes an insuperable handicap when it’s both cold and wet, as it was today.

“Then you get a downward spiral, because you can’t get enough heat into your tyres, and that’s what we saw today. Our drivers did their best, but in truth they were facing an impossible task.”

For tomorrow their task is to move forward and get into the points. But McLaren were one of the teams that felt the graining problem most acutely.

Another driver with a lot of work to do is Kimi Raikkonen, who’s endured a difficult weekend so far. That has kept him from enjoying the benefit of the gains Ferrari have made this weekend.

“We have brought some small updates here, which we already tried at the Bahrain test,” said Fernando Alonso. “Everything worked well and that’s good news.”

While Alonso may have a chance of taking on the Red Bull drivers for a podium finish from fifth on the grid, Raikkonen needs to avoid the kind of early-race setback which he suffered in Malaysia and Bahrain – both courtesy of Kevin Magnussen.

Do you expect anyone to challenge the Mercedes drivers in China? If not, who will win the battle for third? Have your say in the comments.

36 comments on “Rosberg, not the Red Bulls, is Hamilton’s main threat”