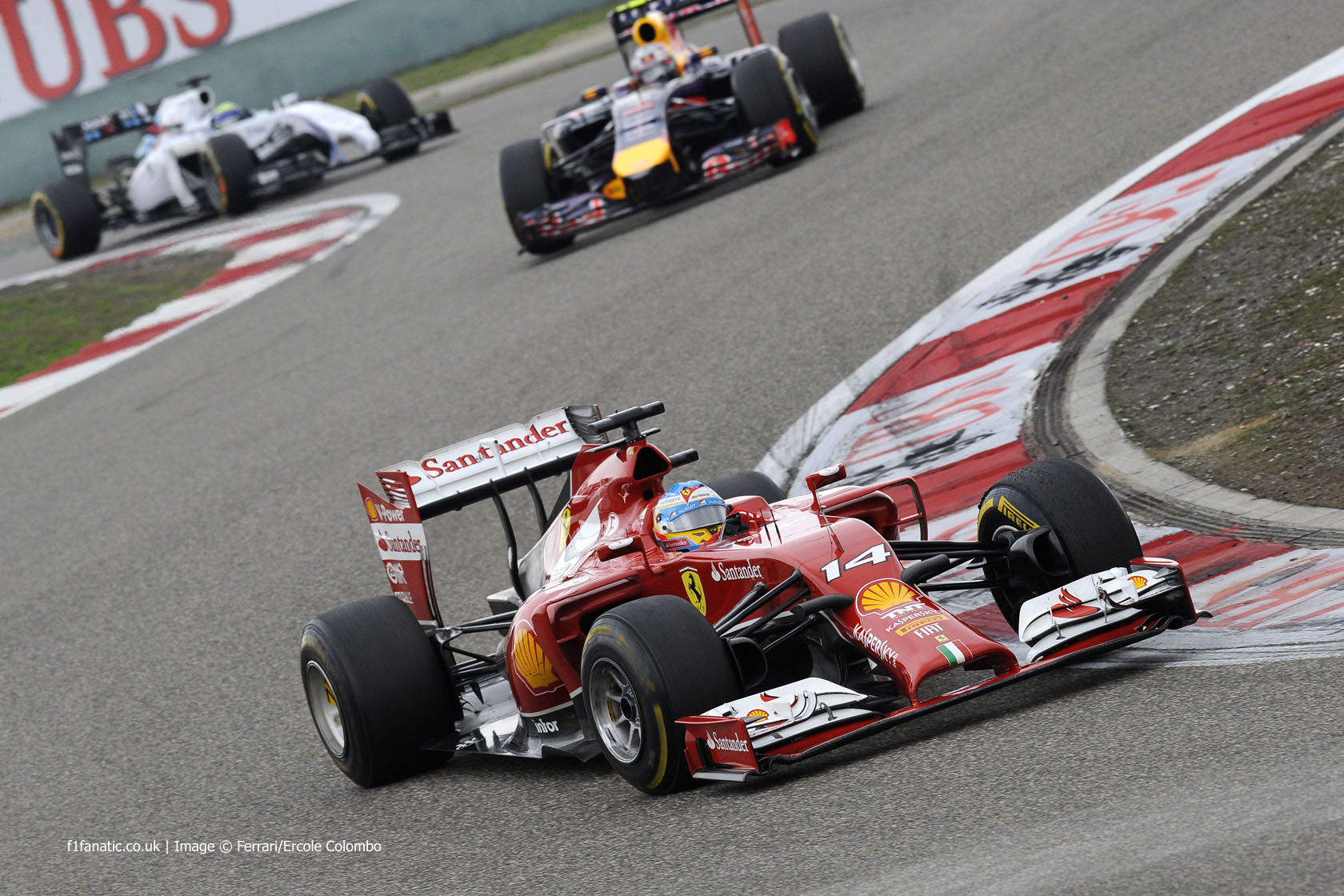 Fernando Alonso was voted Driver of the Weekend for the Chinese Grand Prix after securing his and Ferrari’s first podium of 2014.

Alonso received 47.7% percent of the vote to top the poll ahead of second placed Lewis Hamilton. The Mercedes driver missed out on a third consecutive Driver of the Weekend win but received the highest percentage of votes for a driver in second place so far this season.

Daniel Ricciardo was voted in third place for the third time this season with 7.8% of the vote after passing team mate Sebastian Vettel on his way to fourth place.

Alonso took his now somewhat usual fifth place on the grid during the wet qualifying session, best of the rest behind the Mercedes’ and the Red Bull’s seemingly the maximum the Ferrari was capable of.

He got a clean start away from the grid but was caught somewhat unaware by the flying Williams of ex-team mate Felipe Massa, and both were lucky to come away with no race-ending damage. He then pulled an impressive move on the slow starting Daniel Ricciardo into turn four to move into third.

From then on Alonso drove as Alonso does best, calmly and maturely and with relentless consistency. A well-timed pit stop moved him ahead of Vettel and he then set about building a gap Ricciardo could not close at the end.

If you put a spin on it, Alonso drove fantastically considering the advantage the Red Bulls had through the corners to catch him. An ace start moved him ahead of one rival, and a good strategy called moved him ahead of Vettel.
@Juan-Pablo-Heidfeld-1)

It’s difficult to overlook Fernando Alonso this weekend. While his team mate struggled to control the F14T, Fernando was a regular top 3 and in the race he didn’t budge when Massa hit him. A well deserved Driver of the Weekend.
Neel Jani (@neelv27)

I had to vote Alonso. I’m a Lewis fan, but he really wasn’t opposed. Probably not fair to say that because he put himself in that position with a brillian qualifying in the wet and a clean start that left everyone far behind. But Alonso clearly has a lesser car and is outpacing Kimi terribly in every respect. To put that Ferrari on a podium was impressive.
@DaveD

Despite being openly unhappy with his car’s handling and performance on Friday, Hamilton took full advantage of wet conditions that greeted the field in qualifying to storm to his third pole from four attempts.

A solid getaway from the lights while team mate Nico Rosberg – Hamilton’s only real challenger – slipped back, left him with little difficult work to do, and Hamilton ended up winning three races in a row for the first time.

He was amazing in qualifying and his race was stellar. What more can he do? As neither a Hamilton supporter or detractor it is impossible to ignore that his level of concentration and focus on racing is reaching historic levels so far this season.
@Bullmello

Has to be Lewis Hamilton again. Masterful control of the race, showing his team mate up on a track at which he is supposed to excel. Especially considering his tribulations in free practice, the commanding nature of his weekend – the result never looking in doubt from the start of qualifying – was admirable.
Max Jacobson (@Vettel1)

Ricciardo put yet another one over on his tea mmate in the wet qualifying session to claim second on the grid, this time without the aid of mechanical issues for Vettel.

A poor getaway left him with some work to do but Ricciardo fought back well, getting past Vettel for the second race in a row with team orders and closing on Alonso and his first podium towards the end.

Got the absolute most out of the RB10 in qualifying, and held his cool after a slow start. Once in front of Vettel, the way he pulled away and started to catch Fernando towards the end, and especially his ultra-calm demeanour on the radio, stood out for me.
Dean McKinnon (@Hsvdt15)