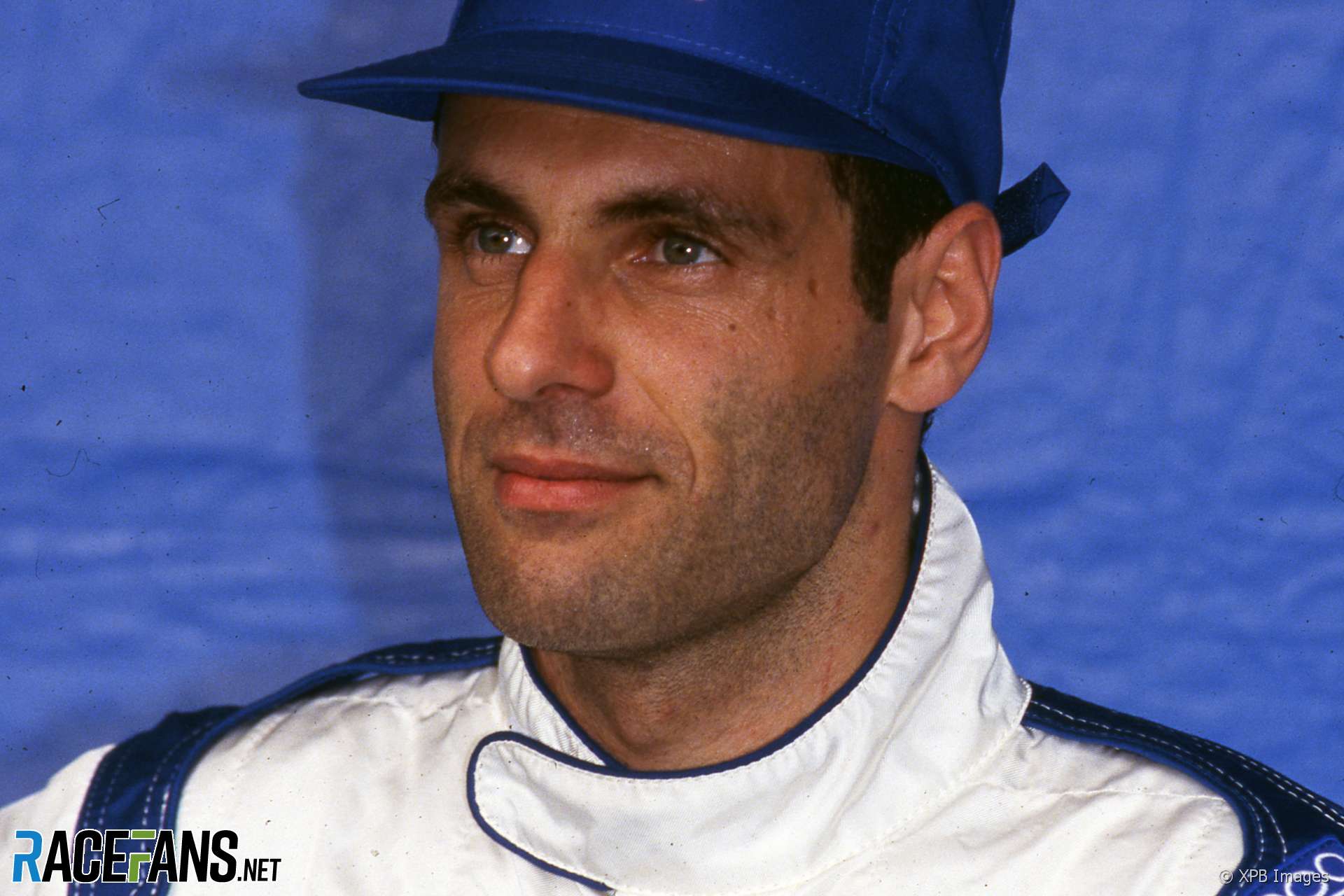 Rubens Barrichello spent Friday night at Maggiore hospital in Bologna after his sickening crash on the opening day of the 1994 San Marino Grand Prix.

On Saturday he returned to the Imola track, to widespread relief his injuries were not as serious as had first been feared. He would take no further part in the weekend, however, and that presented an opportunity for F1’s two smallest teams.

With Barrichello’s withdrawal the 28-car field had been trimmed to 27, with room for all bar one of them on the grid. The Pacific and Simtek outfits, both appearing at their third races, had fought over the last two places on the grid at the two previous races. Now the chances were only one of their drivers would be left behind on Sunday.

As has always been the case in Formula One the competitive urge is no less fierce at the back of the grid – it is merely conducted on a smaller scale by less well-funded teams. Simtek and Pacific each had in the region of two dozen staff at the track.

Simtek even enlisted BBC presenter Steve Rider to bring a parcel of extra parts with him in his luggage when he flew over from Britain. So it was a hassle they could have done without when their two drivers, David Brabham and Roland Ratzenberger, tangled at the Tosa hairpin during the morning practice session, leaving Brabham’s car stuck in the gravel.

That afternoon’s final qualifying session would decide which driver would take no further part in the weekend. Ratzenberger had an added incentive to make the cut: the Simtek driver had a place in the team for the opening races, but was widely expected to be replaced by Jean-Marc Gounon later in the season.

Technical problems had thwarted his efforts to qualify in Brazil. But at the TI Aida circuit he got him Simtek onto the grid and battled his way to the end of the race.

The high-speed Imola circuit was a very different proposition to the slow twists of Aida. Ratzenberger had been ahead of both Pacifics in the first qualifying session, but in the second Bertrand Gachot was leading him and Paul Belmondo was just three-tenths of a second slower.

Brabham briefly took over Ratzenberger’s car and confirmed his team mate’s suspicion there was something wrong with his brakes. They were replaced in time for the decisive final hour of qualifying.

Jean Alesi, who was missing his second race due to injury, was watching the cars accelerate through the flat-out sweeps of Tamburello and Villeneuve when Ratzenberger came into view, 18 minutes into the session. The purple car hurtled past at over 300kph and Alesi noticed sparks flying from the front.

What happened next was revealed in a series of grainy, static videos. A piece of bodywork flew from Ratzenberger’s car as he approached the Villeneuve corner. Crossing a recently resurfaced patch of tarmac, his front wheels appeared to lose contact with the ground. The signs indicated his front wing had failed at the point on the track where he needed it the most.

Instead of rounding the Villeneuve kink the Simtek carried straight on at unabated speed. Ratzenberger struck the concrete retaining wall on the outside of the turn at 314.9kph (195mph).

For the second time that weekend, Professor Sid Watkins and the medical crew scrambled to the accident scene. The situation was obviously very serious: Ratzenberger was slumped at the wheel of his car and the impact had gouged a hole in the cockpit. Brabham took one glance at his team mate as he passed by and immediately wished he hadn’t. “I think he’s gone,” he told his wife when he returned to the pits.

Silence fell across the circuit. Television cameras zoomed in pitilessly on the scene as a doctor tried in vain to resuscitate the driver.

It was hopeless: Ratzenberger had sustained serious head injuries. He was taken to Maggiore hospital and declared dead a few minutes after being admitted.

“I was shaking all over”

The grim business continued at the track: the crash scene was hosed down and qualifying restarted 45 minutes after the accident. But Williams, Benetton and Sauber took no further part in proceedings.

Ayrton Senna, who collected his 65th pole position, had commandeered a course car to visit the scene of the accident himself, as he had after other serious crashes in recent seasons. In a column published on the day of the race Senna said his fears about safety had been “borne out in tragic fashion” by Ratzenberger’s crash.

Other drivers, even those who had witnessed fatal accidents at races before, were shocked by what had happened. “I felt sick as I saw the accident,” said Gerhard Berger, who knew from experience the consequences of a high-speed front wing failure at Imola. “And it was another Austrian driver, thus it was even worse. I was shaking all over my body.”

The paddock had lost a friendly, approachable driver who was just weeks into his dream career as an F1 racing driver. The tiny Simtek team was devastated by the accident, which had been made all the more traumatic by the gruesome pictures beamed back from the scene.

It left Brabham, whose wife was four months pregnant, with a gut-wrenching decision. On previous occasions when a team had lost a driver it had been normal practice to withdraw the second car – as Ferrari had when Gilles Villeneuve died and Osella did when Ricardo Paletti died in 1982.

But that was 12 years ago and Brabham, who had been instrumental in forming the new Simtek team, believed it was his duty to carry on. Bravely, he chose to race on Sunday, even amid doubt over the exact cause of Ratzenberger’s accident. It later emerged he had gone off the track on the previous lap and appeared to have weaved the car, perhaps trying to judge if his wing was broken, before continuing.

There were repercussions for fellow newcomers Pacific. Belmondo declined to take Ratzenberger’s empty place on the grid. The team had also concluded a sponsorship deal with a tobacco brand of the name ‘Black Death’, whose logos had been due to appear on their cars for the first time on race day. They left the stickers in the garage.

In the stunned paddock, the drivers came together in search of answers. Niki Lauda urged Senna to use his position as the sport’s most famous driver to lead a reformed Grand Prix Drivers’ Association and lobby the FIA for better safety standards.

Safety in F1 was back on the agenda following the sport’s first fatal accident in years. But no one could have expected the next one was just 24 hours away.

This feature will conclude tomorrow.