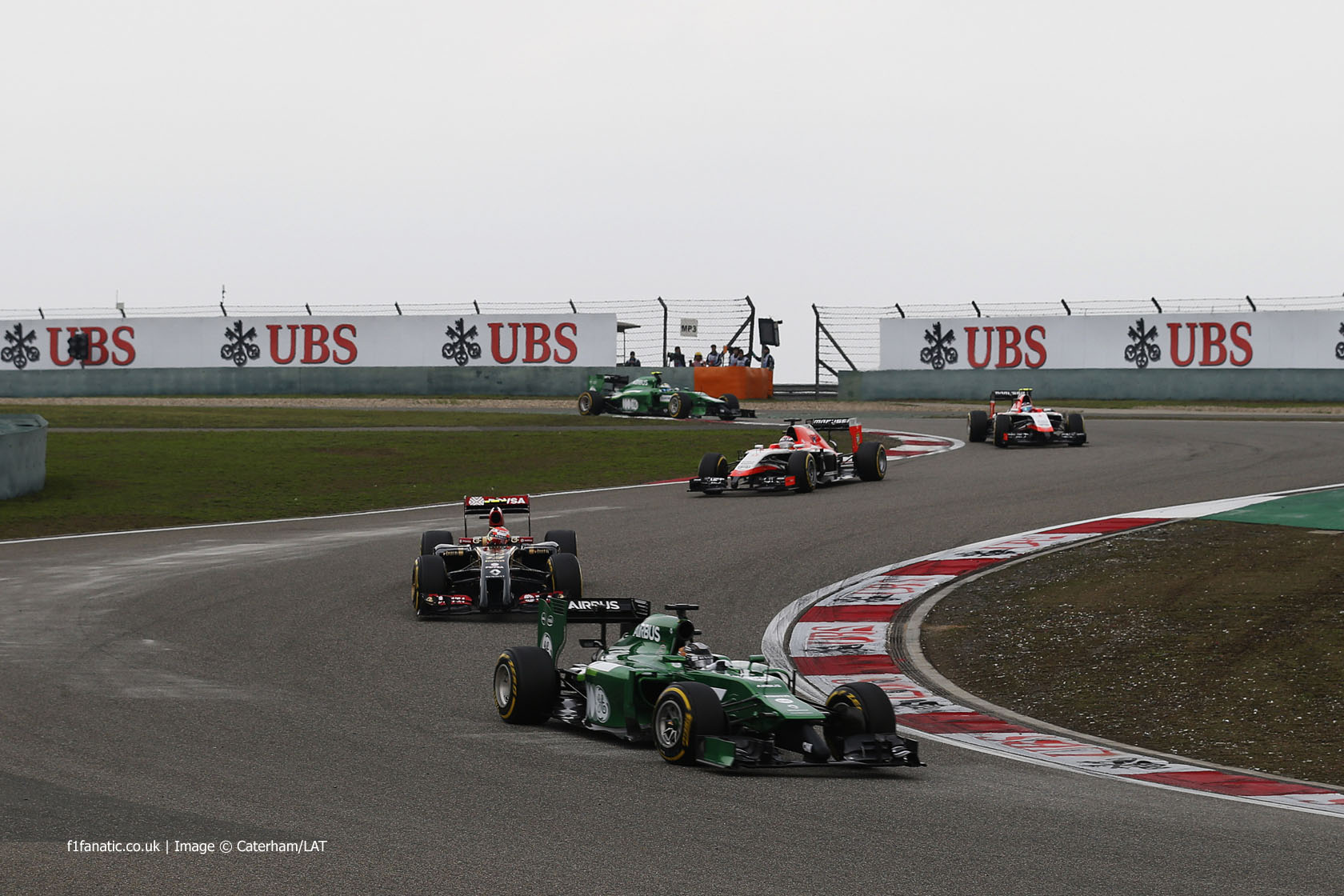 In the round-up: Four of F1’s smallest teams told the FIA in a letter they believe some aspects of the sport’s governance may not comply with EU law as it applies to sports.

Is the EU going to get involved in F1? (The Telegraph)

“The meeting called for [today] largely came about because four of the smaller teams – Marussia, Caterham, Sauber, and Force India – wrote a letter to [Jean] Todt in which they expressed their unhappiness at the abandoning of the cost cap. While it did not state that they will go knocking on the European Commission’s door, it did reference the legality of F1’s governance within the context of EU law.”

Force India deputy principal Bob Fernley: “It was a unanimous agreement to introduce cost controls and a cost cap… the question that we have is how can something that’s unanimous across all teams and stakeholders be overruled by a strategy group? For us, that’s the crux of the matter.”

“‘We have signed the deal with Bernie Ecclestone and will announce it officially with an event in Baku shortly,’ said Azad Rahimov, Azerbaijan’s Minister of Youth and Sports, who is also the chief executive of Baku 2015.”

“I was asked in the evening if I wanted to race on the Sunday or not, the team and the FIA said it was my call. I had never experienced losing a team mate before, so I just didn’t know what to do. My mind was all over the place and I just couldn’t think clearly enough. For whatever reason, I suggested I do the warm up and see how it went and then make a decision.”

Ratzenberger ‘should have Imola tribute’ (BBC)

“Brabham believes [Roland] Ratzenberger should at least have a ‘simple plaque’ at the circuit to commemorate him.”

“From now on, VirtualR will not be showcasing or hosting any modding content related to Formula One cars or F1-related content, all past postings featuring such content have been removed from VirtualR. […] As you have probably guessed correctly by now, this action is taken due request from the license owners (Formula One World Championship Limited). Needless to say, I can’t and won’t take any risks in this matter, so the above rule will be enforced with absolutely no exceptions.”

“Once we even discussed Austria’s appalling run of racing tragedies – Jochen Rindt, Helmuth Koinigg, Jo Gartner and the sadly forgotten F2 driver, Markus Hottinger. He was not impressed when I mispronounced the latter as ‘Hot,’ instead of something like ‘Hurt,’ with an umlaut. We didn’t know that a couple of years later he would join that sad list.”

“‘Bernie Ecclestone called,’ [F1 photographer Keith] Sutton says. ‘And he said: ‘I’ve been getting your press releases and I’d really like to speak to Ayrton and give him a test drive in the Brabham.’ I thought great, so I just put him in touch and then it all started.'”

The glorious majesty of Imola (McLaren)

“So, yes, Imola will always be associated with Ayrton’s death, and understandably so, but for me it will also always be associated with the beginning of the European season, with Italy in the spring, with Ferrari, with McLaren, and with the beauty and majesty of the sport of Formula One being played out on a wonderful racetrack that I may never visit again but I will for ever cherish having seen at its glorious best.”

“Twenty years since the tragic events in [Imola] of Ratzenberger and Senna. I was sitting in the kitchen in Monaco with my mum and my cousin and we were listening to the radio long into the afternoon and evening for news on his condition. As a result of these terrible accidents our sport has been made so much safer over the years and several more deaths have been avoided since. Let´s never stop to improve safety.”

Roland Ratzenberger footage is rare. This 1992 F3000 interview gives you a little sample of what he was like: https://t.co/menOLpHaMg

Ratzenberger's mum Margit: 'It's hard for me, but I have to be here to remember my son. I think I (will) never come back. It's enough.' #F1

A memory of Ratzenberger from @Magnificent-Geoffrey:

What I’ll always remember about Roland Ratzenberger was the story Heinz-Harald Frentzen recalled about when they went to a Japanese nightclub during their time racing in the Japanese Touring Car Championship.

They were in the club when Ratzenberger apparently spotted or heard a young woman in distress. The woman was being assaulted by a male attacker wielding a knife. Roland confronted the man with no regard for his own personal safety and was able to see him off before helping his victim to safety.

Ratzenberger really was a hero. It’s a terrible tragedy that his life and career were cut so brutally short.
@Magnificent-Geoffrey

Happy birthday to Ivan and Ivan!

No one reading this is likely to need reminding that today is the twentieth anniversary of the death of Ayrton Senna.

On a more cheerful note, today was also the day which saw Senna’s first race victory after moving to McLaren, which he scored at the same circuit in 1988: