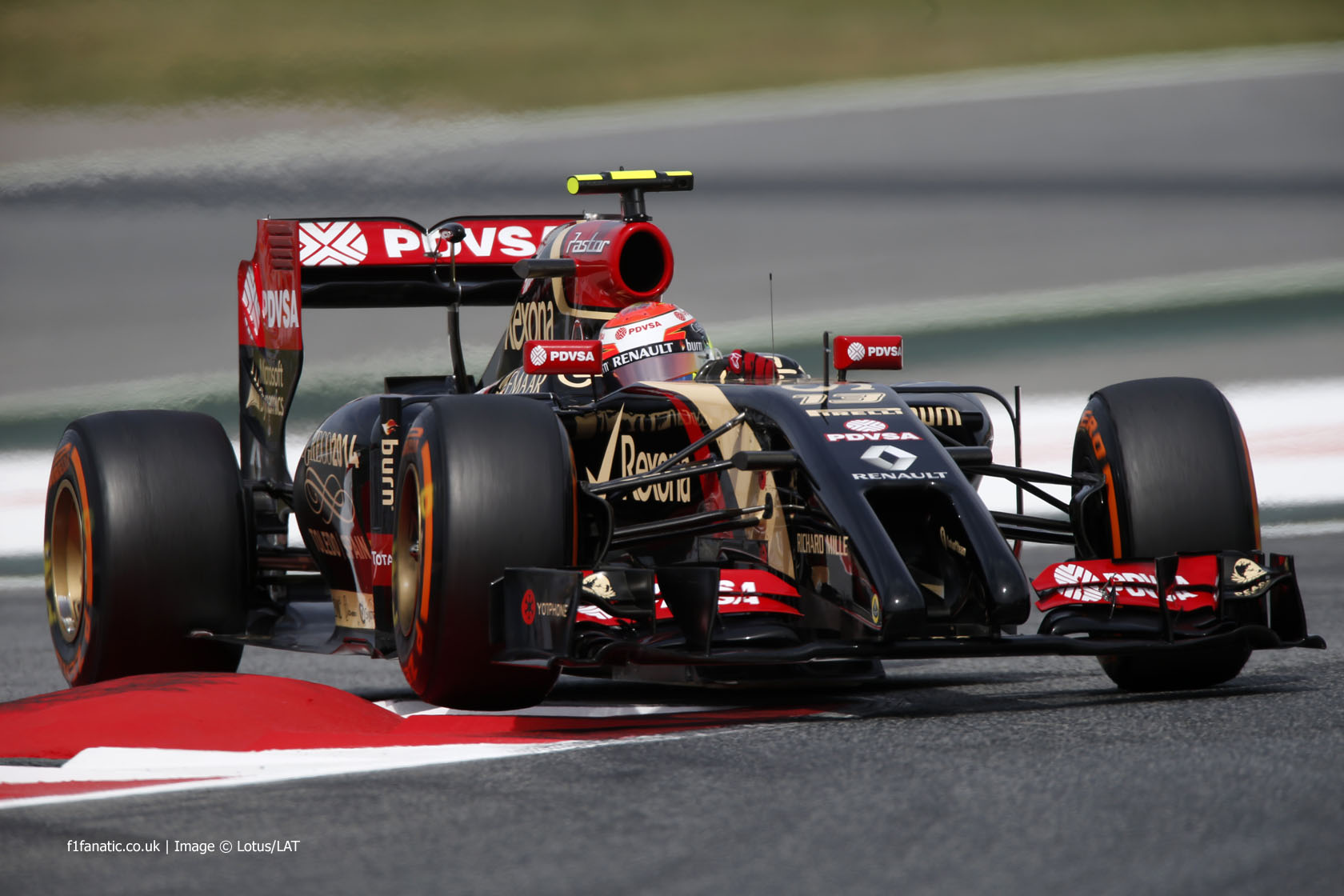 Pastor Maldonado redesigned the front of his Lotus and the Spanish crowd lapped it up as Sebastian Vettel’s miserable weekend continued.

Here’s how Saturday at the Circuit de Catalunya unfolded on Twitter.

Can't remember seing #F1 cars sliding so much on new tires. Doesn't look like a lot of fun… 😁 #wheresthegrip

Not for the first time this weekend, Chilton has come to a stop in a gravel trap. #F1 pic.twitter.com/9JwuxBDXVp

You’ve got it on the wrong way round, @danielricciardo #F1 pic.twitter.com/iiBi5RcFJa

Felipinho Massa got a lovely present from his father’s team.

Here we go then, 5 to go before a crucial qualifying session. Tricky place to overtake here, making today even more important. #F1

Pastor Maldonado and Lotus were confident heading into qualifying, but it all ended very soon.

Pastor has been pacey so far this weekend, what will qualifying hold? #SpanishGP pic.twitter.com/IRZxP66Upo

Maldonado’s car gets away from him and makes contact with the wall. #F1 pic.twitter.com/mwBbjhOF7t

#F1 driver takes liberties with track limits, keeps foot in, gets bitten. Just the way it should be

Local man is out. Surprising number of empty seats in the main grandstand #SpanishGP pic.twitter.com/vlOQvxnFcs

A power unit problem meant Kevin Magnussen could not set a time in Q2.

Pit to Kevin: “Really sorry Kevin, but I’m afraid our session is over.” Kevin aborts, he has a technical problem: http://t.co/JaTuZVRc0K #F1

Interesting to hear the Spanish fans clapping and cheering Sebastian Vettel as he runs back to the pits after conking out.

Mercedes duly took another pole position, with Nico Rosberg second on the grid for the first time this year.

Good to see Kimi give ALO a run for his money, but Ferrari still doesn’t look good, very clearly 3rd best engine now, lots of work to do.

What an epic performance again today by @MercedesAMGF1 & @LewisHamilton He really is on it. Good to see Bob Bell in garage. Key man. #F1

.@MassaFelipe19 I am disappointed with my lap today as I lost the rear in T10 after braking, its nothing to do with the car, it was my fault

Later, junior series were in action, GP2 and GP3 races taking place at the track.

Think you can’t win from 16th on the grid at @Circuitcat_eng in the dry? @JCecotto just did! #GP2 pic.twitter.com/an6TaMU6oV

Inter team battle between ROS & HAM is fun to watch. But the big fight tomorrow will be for 3rd with a few candidates eyeing up the podium.

Grosjean, Maldonado, Vergne, Hulkenberg and Sutil were selected at random to have anti-doping tests. #F1

Mixed day. Happy to beat Koba in Q but as a team we are disappointed with our current performance..… http://t.co/OdAwzuUyy4

Great performance from the team today, we have come with updates which are working well Tidy lap = tidy time #F1 #M4X pic.twitter.com/a4MRSJJvNq

Feels good to be back in the top 10 ! Thanks to my guys for the hard work. De retour dans le top 10, merci à mon équipe. #lotus #r8main

P3 in qualy today. Those Mercs are smokin so doing the best we can for now. See what we can do tomorrow. All in all a pretty good day ✌️