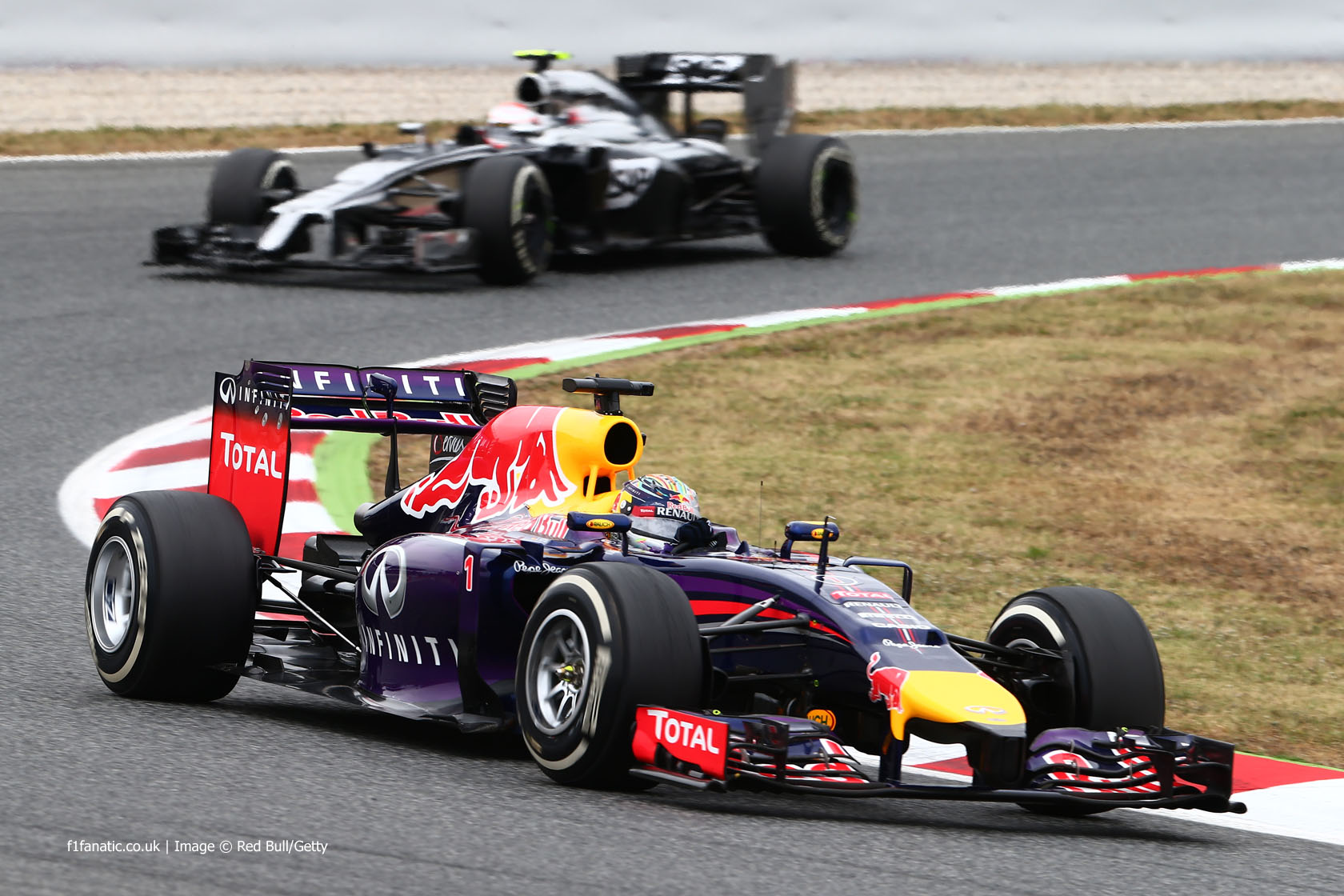 After a fine drive from fifteenth on the grid to finish fourth – on a track with a reputation for being difficult to overtake on – Sebastian Vettel was voted as driver of the weekend for the first time this season.

Vettel received 51.9% of the vote, and with race winner Lewis Hamilton only receiving 20.5%, this is the biggest margin between first and second so far this season.

Another driver who did not finish on the podium was voted among the top three: Romain Grosjean, who took 11.0% of the vote after scoring Lotus’ first points of the season, and despite finishing lower than he qualified.

Vettel switched chassis back to one used during testing before the weekend in a bid to cure some handling issues he’d been having with the RB10. Unfortunately the car ran no longer on Friday than it managed during the pre-season tests, breaking down after four laps in first practice and requiring a change of wiring loom, meaning Vettel missed the second session as well.

Despite these setbacks Vettel looked set for a solid qualifying on the second row – likely fourth behind his team mate who had actually got some running in – but was struck once more by mechanical gremlins in Q3 when his gearbox failed. The resulting five-place grid penalty meant Vettel lined up 15th.

A mediocre start saw Vettel gain just one place and he sat behind Jenson Button for twelve laps before making an early first stop, all but confirming a three stop strategy. Red Bull and Vettel could not have played it better however – he made the most of his new tyres to set faster laps and leapfrog a number several of his rivals.

Vettel also passed Kimi Raikkonen and Valtteri Bottas to secure the fourth place he probably should have started from.

After suffering so much with problems out of his control on Friday and Saturday, to drive like he did during the race to fight his way back to fourth was a brilliant demonstration of what a great driver he is.
@Magnificent-Geoffrey

Despite finishing a long way behind his team mate, Vettel impressed me this weekend, he had minimal running on Friday, was extremely unfortunate to line up 15th due to gearbox issues, and still came through for fourth place, finally beating a Mercedes to fastest lap along the way (although this may have something to do with his three-stop strategy!)

What’s more he showed himself to be able to perform clinical overtakes when he had to, without which his strategy couldn’t have worked, so in my opinion he is a worthy Driver of the Weekend.
G Breese (@Breesegp)

A serious charge up the field on a very difficult overtaking circuit with a car down on horsepower. I don’t think he’s the best driver in the field, or even second best, but he’s undeniably extremely good.

Still really want to see him fight for race wins and the title in a car less dominant then the ones he’s racked up his wins in.
@Scribe

By his own admission Hamilton’s Friday was his best for a very long time, however come Saturday he seemed to have lost his way. Nico Rosberg took the initiative in Q1 and Q2, and for the second year running it looked like he would steal pole from under his team mate’s nose. But it wasn’t to be, and Hamilton duly claimed his fourth pole position.

After a clean start Hamilton looked comfortable during his first stint. But after his first pit stop the handling woes returned and Rosberg began to close in, setting up a tense final few laps. Nonetheless Hamilton soaked up the pressure exerted by his team mateand held on to take his fourth straight win.

I think Hamilton edges it over the weekend. He had a fundamentally poorer balance than Rosberg on Saturday and Sunday and yet won the race from pole at a track where Nico trounced him the year before.

His pole lap was sheer driving artistry, both in the way he neutralised the wheelspin on car that, on the basis of the snippets of onboard footage with Rosberg, was not translating its torque onto the tarmac as sweetly as Nico’s, and in the way he effortlessly ironed out the ‘passive’, i.e. not throttle-induced, oversteer triggered by tailwinds and cold rears.

Perhaps the very fact that Hamilton, if probably on the recommendations of his engineers, went the wrong way on set-up infringes upon his case, but I would say the occasional set-up woes Hamilton suffers is but one factor on an increasingly short list of Lewis’ weaknesses.
WilliamB (@William-Brierty)

I gave the nod to Hamilton because this is driver of the weekend not the race. The two Mercedes were that close that I think had Rosberg got pole the exact same race would have happened between the two only with Rosberg on top. So to me they are that close that each driver needs practically a perfect weekend to prevail. I think Rosberg lost out in qualifying when he was on a hot lap when Vettel’s car conked out and they red flagged the session briefly. Had that not happened I’m not convinced Hamilton would have beaten Rosberg in qualifying.

So while I think Vettel is a very strong candidate for driver of the race, I don’t think he was the driver of the whole weekend. I think that was Hamilton who did just enough to win by half a second, starting on Saturday.
@Robbie

Despite having broken into the top ten in qualifying last time out in China, Lotus looked to have improved tenfold in Spain, with both cars regularly in the top ten during practice. Grosjean demonstrated this in qualifying with fifth on the grid, somewhat of a shock to the team who had locked out the back row just four races ago.

Grosjean also looked to set to at least maintain his position during the race, but faulty engine sensor left him down on power and vulnerable to the Ferraris on the straights. Nonetheless Grosjean can take heart from the fact he scored Lotus’ first points of the 2014 campaign in an ever dramatically improving car.

Romain Grosjean delivered the sort of performance that he showed for a lot of last season. While his team mate was blaming walls for being too close and smashing into Caterhams, Grosjean out-qualified the arguably quicker Ferraris and finished in the points despite a problem. Top job.
@Craig-o