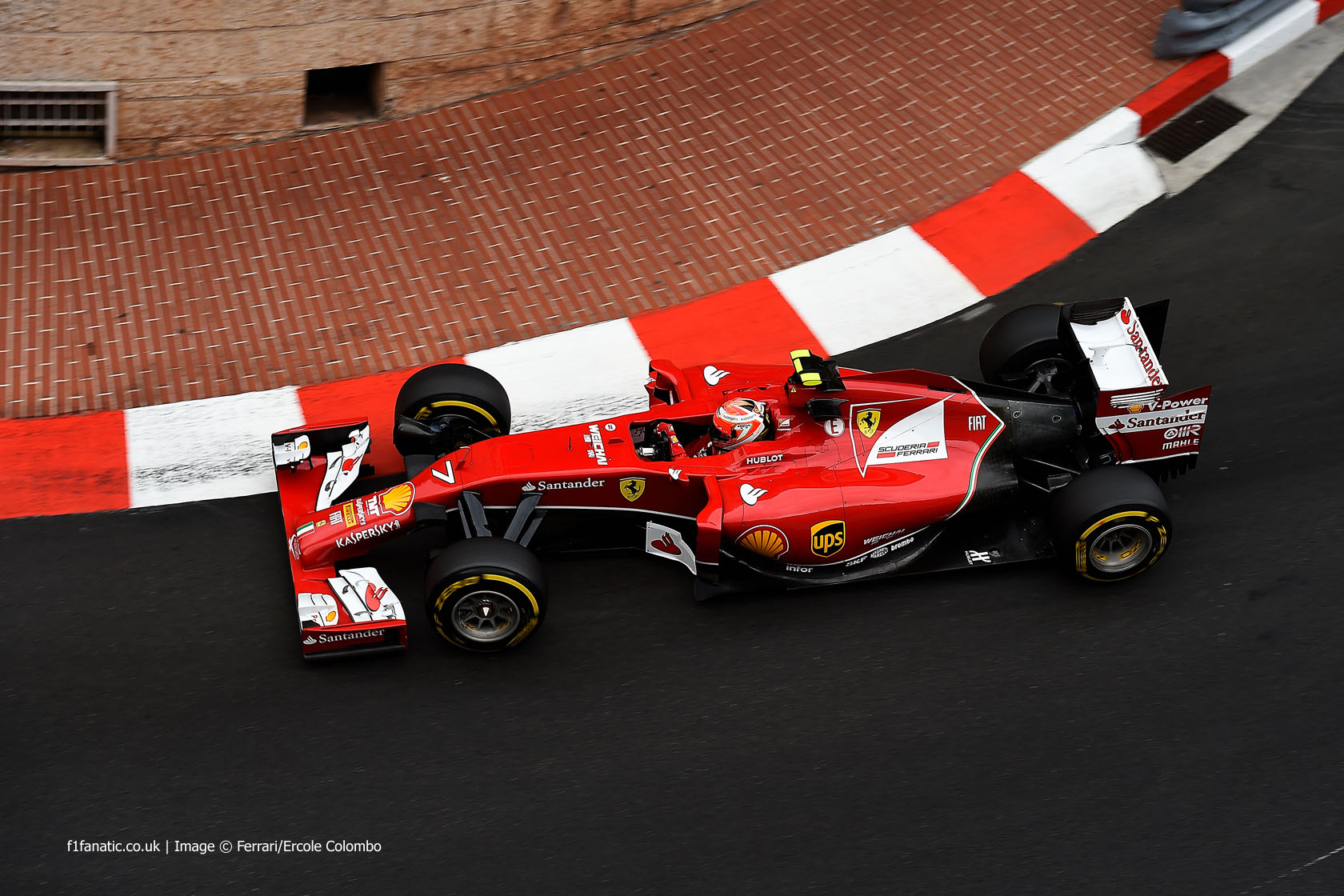 As is traditional the first two practice sessions in Monaco were held on Thursday instead of Friday.

Heavy rain and hail fell before the afternoon running, meaning the session got off to a very quiet start.

However Kimi Raikkonen’s running ended soon after it began. And he then had a near-miss with Sebastian Vettel’s car in the pits – a Red Bull mechanic had to drag him out of the way before Vettel blasted out of his pit box.

Only race drivers participating in practice today, no testers, as they need as much time as possible to acclimatise to Monaco.

It’s time for #FP1 in #Monaco and our engineers are ready on the unique pitwall! pic.twitter.com/BY1AgQeWEk

Max Chilton was in the wars early on, ending the session after just seven laps.

Sutil: “The rear just snapped, I wasn’t even pushing.” He made light contact with the barrier and his car is being craned away. #F1
— F1 Fanatic Live (@f1fanaticlive) May 22, 2014

I'm sorry but honestly ! The cars sound even worse here (Monaco) – like mopeds with touch of catarrh #f1

In Monaco, where you go deaf halfway through FP1 with the noise bouncing off the high rises, I don't hear complaints about 'quiet' F1 cars.

Alonso backs away from the marshals after going off at Mirabeau. #F1 pic.twitter.com/JqajWtWvir
— F1 Fanatic (@f1fanatic_co_uk) May 22, 2014

Whole process in FP1/2/3 is all about building confidence ahead of 1 crucial lap on Saturday afternoon that normally determines your race.

The low road and the high road at the hairpin this morning. Not too bad a view! pic.twitter.com/Q5sxXiCSiI
— Adam Cooper (@adamcooperF1) May 22, 2014

FP1 ends and the rain starts. Say goodbye to all the rubber laid down this morning…

The afternoon session began on a wet track. Most drivers opted to stay in the pits as the rest of the weekend is expected to be dry.

1pm and the street lights are on in Monaco. Heavy dark clouds engulf the Principality.
— Will Buxton (@willbuxton) May 22, 2014

Rain rain go away But please come back another day Like Saturday, just before quali please, or about 1430 on Sunday (Sorry for the rhyme)

New approach to getting in the car for @ValtteriBottas – important to keep the feet dry! #FP2 #BO77AS pic.twitter.com/UHDMCsWf0g
— WILLIAMS RACING (@WilliamsRacing) May 22, 2014

Wheelspin all the way down the straight from the chicane to Tabac from BOTTAS. Mega #F1 #MonacoGP
— Glenn Freeman (@glenn_autosport) May 22, 2014

Half an hour, still no lap time set. Pretty appalling for all those who’ve paid to come…
— Daniel Johnson (@danielt_johnson) May 22, 2014

An hour and a half ago the stands were empty and the track was full of #GP2 cars. Now the stands are full but the track is empty. #F1

It was dry enough for slick tyres in the final minutes of the session and 21 drivers were on track for an exciting conclusion of the day’s running.

Frantic last 10 mins of FP2. Nervous time for those watching from the garages.

Well, well. A little cuddle, a few complimentary words from the boss and Alonso is top of the times #f1

His team mate Kimi Raikkonen, meanwhile, was steered of Sebastian Vettel’s path in the pit lane.

Raikkonen dragged aside as Vettel does practice start. “Kimi was obviously keen to get run over,” said Vettel. #F1 pic.twitter.com/4UudzICgnu

Good session & really pleased to get those last few laps in the dry this afternoon which was a big plus. I just love racing here! #MonacoGP

The Formula Renault 3.5 drivers were also in action today:

This is the limit! FP1 just kiss the wall. No damage #Monaco pic.twitter.com/ZOUIhR3wrR

First day is finished. FP1 was a quite good session then FP2 we only drove a couple of laps in the end… http://t.co/cQlgegenLQ
— Marcus Ericsson (@Ericsson_Marcus) May 22, 2014

…of course, for some people the sheer excitement of Monaco is just too much. pic.twitter.com/mETenV1n16
— Red Bull Racing Spy (@redbullf1spy) May 22, 2014

Alonso’s commitment today in Monaco was beyond the call of duty but immensely impressive. Abrasive guy, but you’d want him in your gang.

30 years ago I was the pit board man for Jacques Laffite at Monaco in between my sponsor duties for Williams.Blimey, where those years gone?

One comment on “2014 Monaco Grand Prix Thursday in Tweets”