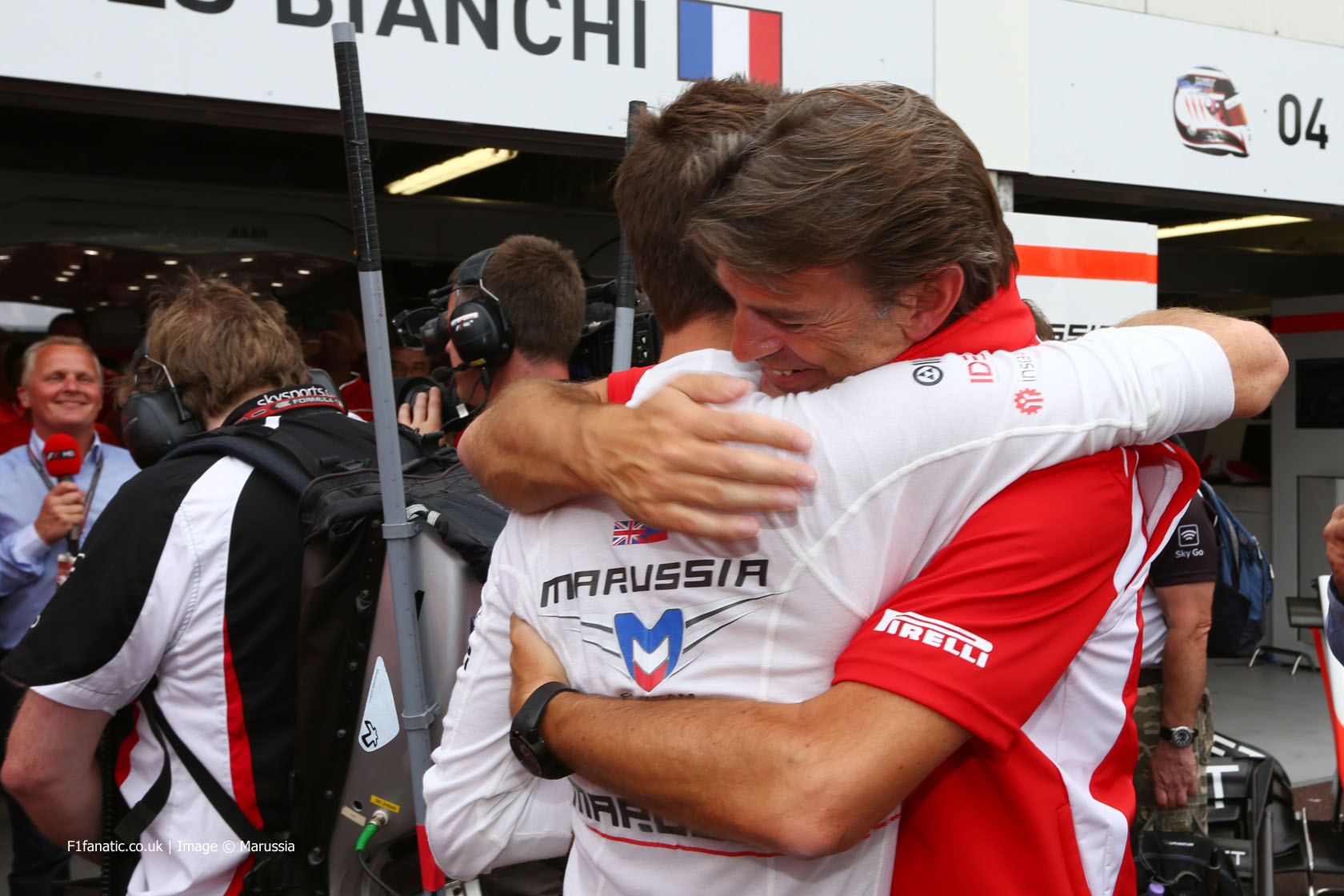 But over at Mercedes the relationship between Lewis Hamilton and Nico Rosberg continued to deteriorate.

Huge day of racing action coming up – 3.5s on the streets of Monaco, Monaco GP and of course the #Indy500. #F1 #bestsundayoftheyear

Holding her Father’s crash helmet bag, Nina is back where Ronnie won in 1974 @Ericsson_Marcus pic.twitter.com/JmOsL8r2lZ

On the grid tribute was paid to triple world champion Sir Jack Brabham, who had passed away a week earlier.

Poor start by Ricciardo, he slips to fifth behind Raikkonen and Vettel. #F1

Sergio Perez’s race came to an early end after a collision with former team mate Jenson Button on lap one.

Problems for Vettel – he’s in with power issues. “Come on guys I mean… I’m sure you tried everything.” Frustrated but a team man

Ferrari were not pleased as Max Chilton ruined Kimi Raikkonen’s chance of a podium finish.

Hamilton looking very racey. Not going to settle for 2nd without pushing Rosberg into making a mistake or making an audacious overtake #F1

Hulkenberg has the trophy for move of the race so far. That was an epic move – he’s now closing on Jean Eric. #F1

Bianchi was similarly opportunistic, squeezing past Kamui Kobayashi in what was the beginning of something special for him and Marussia.

L56 Bottas was leading a four-car train of Gutierrez, Raikkonen and Massa but looks like his engine has gone. #F1

Bianchi now up to 11th for Marussia and one place outside of the points! #F1

#Gutierrez clipped the inside of Rascasse pic.twitter.com/UgyVu3hTs1

Lewis gap up to four seconds – apparently he can’t see out of his left eye, he’s got dirt in it…. #MonacoGP

Magnussen and Raikkonen had an incident, not their first of the season. That allowed Bianchi to score his first points in Formula 1, his team achieving a first top ten finish in their fifth season in the sport.

Raikkonen and Magnussen collide at the hairpin! #F1

Congratulations to Bianchi who finishes eighth on the road, which will be ninth after his 5s penalty, for Marussia’s first points! #F1

Congrats to @Marussia_F1Team for P8 and there first points in F1! Well done to @Jules_Bianchi !!👍👍

Points, ahead of Sauber AND it’s his home race! With all his family and friends here!

Born down the road in Nice, this will mean everything to @Jules_Bianchi and his family. His Dad was in tears. Must admit I was pretty close.

The Mercedes duo and their relationship was again a subject of much discussion.

Lewis Hamilton can’t cope with being beaten can he? He’s not happy. Will Nico Rosberg win the psychological battle between the pair? #f1

Well, there was no acknowledgement of the other on the podium between Hamilton and Rosberg. No love lost there then. Blimey.

Lewis not doing himself any favours this weekend. He needs to concentrate on his driving & leave the rest of it up to the team.

Mercedes drivers now seem completely at odds with each other over the state of their relationship. Good luck with managing that one. #F1

LH left McL without many fans in the garage because of his attitude & arrogance, won’t take long for the same to happen at Merc I’m afraid.

Very happy with todays result! Feel that we got most out of it! #feeltheforce #GoHulk

Deux Points! Hardly dared to dream in the closing stages of the race, but what a fantastic reward for everyone. pic.twitter.com/IyzG9MLp1R

Tough race and wasn’t thinking about points early in the race but nice rewards for all of us! Some good work before Canada to keep improving

Starting from the pitlane and finished P11!! Really happy after a difficult day yesterday. Equal the… http://t.co/Gwpa5BqLm7

Didn’t go well for us today , don’t like to think what it could have been. We turn the page and go ahead , as strong as we are .

Cool to be on the podium in the principality. Race didnt start well but ended better so pretty content with 3rd. Thanks for everyones…

So proud of the team and of what we have done today !! Now let’s keep pushing and enjoy a bit but back to work soon ! With @Marussia_F1Team

Got to say a massive well done to @Jules_Bianchi What a ballsy move on KOB and WHAT A DRIVE!!! #Marussia #Points #F1