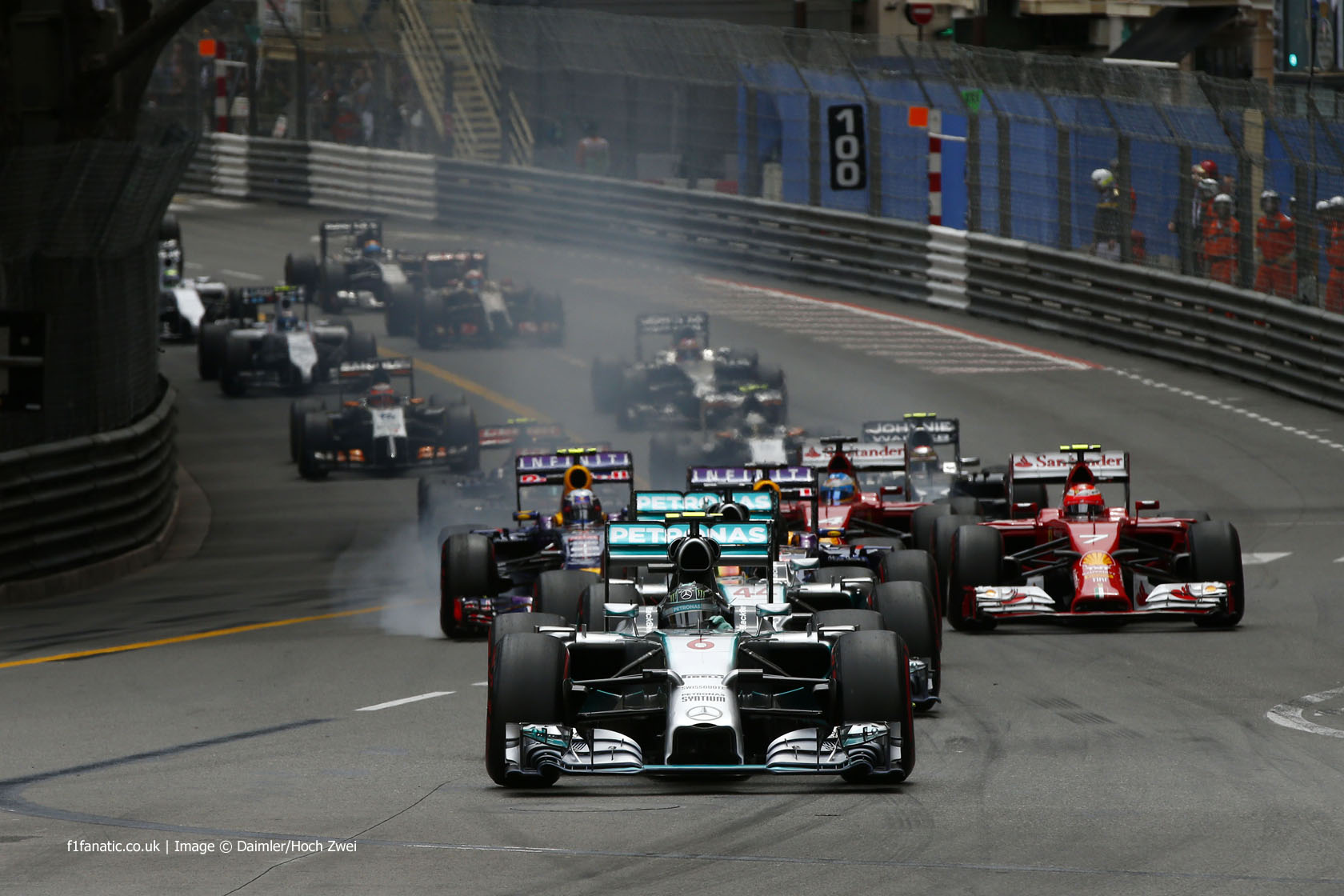 Which F1 driver was the best performer during the Monaco Grand Prix weekend?

Sebastian Vettel – Another weekend of what might have been after yet more car troubles. He coped with an ERS problem in qualifying and lined up less than two-tenths of a second off Ricciardo. In the race a clean start moved him up to this but any hopes of a podium finish died soon afterwards with turbo trouble.

Daniel Ricciardo – Ricciardo looked in fine form around the streets all weekend. He would have paid the price for a poor start, however, had the two drivers who took advantage of it not been struck down by misfortune. He gave chase of the struggling Hamilton late in the race but it always looked doubtful he would have a genuine chance to pass his rival around such a narrow circuit. Nico Rosberg – Not everyone will accept the stewards’ verdict that his moment at Mirabeau, which won him the most important pole position of the year, was an entirely innocent mistake. It was a pity they did not publicise some of the information that led them to their conclusion. Rosberg’s work on his starts paid off and with the advantage of track position this looked a certain win whatever Hamilton threw at him.

Lewis Hamilton – Hamilton’s behaviour outside the car attracted rather more comment than his performance at the wheel. For a driver who’s often shown great flair around Monaco, it was surprising he was even in a position to lose pole to Rosberg in the manner he did. Overtaking any car around Monaco was always going to prove tough, let alone one from the same team in a scenario where both had to start on the same tyre compound. The mid-race Safety Car period and Hamilton’s eye problem in the closing laps only cemented the inevitable.

Fernando Alonso – His qualifying lap was a joy to behold, impressively seven-tenths quicker than Raikkonen. But he got boxed in behind Ricciardo at the start and lost out to his team mate. He had a quiet run to fourth after Raikkonen hit trouble and Vettel dropped out.

Kimi Raikkonen – Started brilliantly to grab fourth, which became third when Vettel parked up. The television cameras did not appear to catch the incident with Chilton under the Safety Car which forced him to make an extra pit stop and dropped him to 14th. He passed Kobayashi and was running eighth when he misjudged an overtaking move on Magnussen which cost both time, dropped Raikkonen out of the points entirely and earned him a reprimand.

Romain Grosjean – Started 14th and sustained a puncture on the first lap, prompting an early switch to soft tyres. He found those impossible to overtake on so stopped again for super-softs on lap 23, which he ran until the end of the race. By then he had ascended to ninth place, and Bianchi’s penalty promoted him to eighth for the second race in a row.

Pastor Maldonado – Reached Q2 for the first time this year but a fuel pump problem prevented him from starting the race.

Jenson Button – Said he had the pace to get to Q3 but didn’t put the lap together that he needed. Tangled with Perez on the first lap, eliminating the Force India, but both were judged blameless. Ran behind Magnussen until his team mate’s power unit problem gave him a chance to overtake for sixth.

Kevin Magnussen – Believed he could have qualified one place higher but still started several spots ahead of Button. Endured a frustrating race including a long hold at his pit stop due to traffic, Vergne’s car being waved out in front of him, a power unit fault and Raikkonen’s lunge at the hairpin. But he came away with a point for tenth. Nico Hulkenberg – Beaten to Q3 by his team mate but made amends in the race by running a long second stint on super-soft tyres. The highlight was a daring pass on Magnussen at Portier, moving up to fifth at the chequered flag – and in the points.

Sergio Perez – Was unlucky to be bumped out of the race on the first lap in what the stewards ruled was a racing incident.

Adrian Sutil – Both Saubers went out in Q1, Sutil for the fourth time this year, and the team are now behind Marussia in the points table. He picked up front wing damage on the first lap and stopping to replace it cost him more places. He was beginning to make progress through the field when he crashed at the chicane.

Esteban Gutierrez – Was closing on Sauber’s first points finish of the year when he clipped the barrier at Rascasse and spun into retirement.

Jean-Eric Vergne – Starred in qualifying, taking seventh on the grid. Magnussen passed him at the start and his team’s eagerness to wave Vergne out of the pits ahead of the McLaren earned him a drive-through penalty. Then, with some predictability, an exhaust problem ended his race.

Daniil Kvyat – Swiped the barrier during qualifying but impressively reached Q3 on his first visit to Monaco. His race ended early however with another exhaust problem.

Felipe Massa – Proved no good deed goes unpunished when he tried to let Ericsson past during Q1 and was hit by the Caterham, leaving him unable to run in Q2. However a brave gamble of not pitting during the two Safety Car periods paid off handsomely, lifting him to seventh at the flag.

Valtteri Bottas – Was running eighth with a train of cars behind him when his Mercedes power unit failed.

Jules Bianchi – Half a second quicker than Chilton in qualifying, he started 21st after a gearbox change penalty. But gained a handful of places at the start and made a vital pass on Kobayashi at mid-race at Rascasse. Benefit from a few more retirements in front of him to finish eighth on the road, which became ninth after a five-second penalty was applied.

Max Chilton – The biggest role he played in Marussia’s success was getting out of Bianchi’s way when he was being lapped. He also tangled with Raikkonen at Mirabeau during the second Safety Car period, earning a reprimand.

Kamui Kobayashi – Was unhappy with Bianchi’s move at Rascasse, saying: “I’m sure I’d have finished in the points if Bianchi hadn’t hit me when he forced his way past”, adding his car was “basically undriveable” after the contact. Nonetheless he brought his car home 13th after a late second pit stop.

Marcus Ericsson – Stayed out of trouble and benefited from the retirements of others to take 11th, just a few tenths ahead of the recovering and fast-closing Raikkonen.

Who was the best driver of the 2014 Monaco Grand Prix weekend?