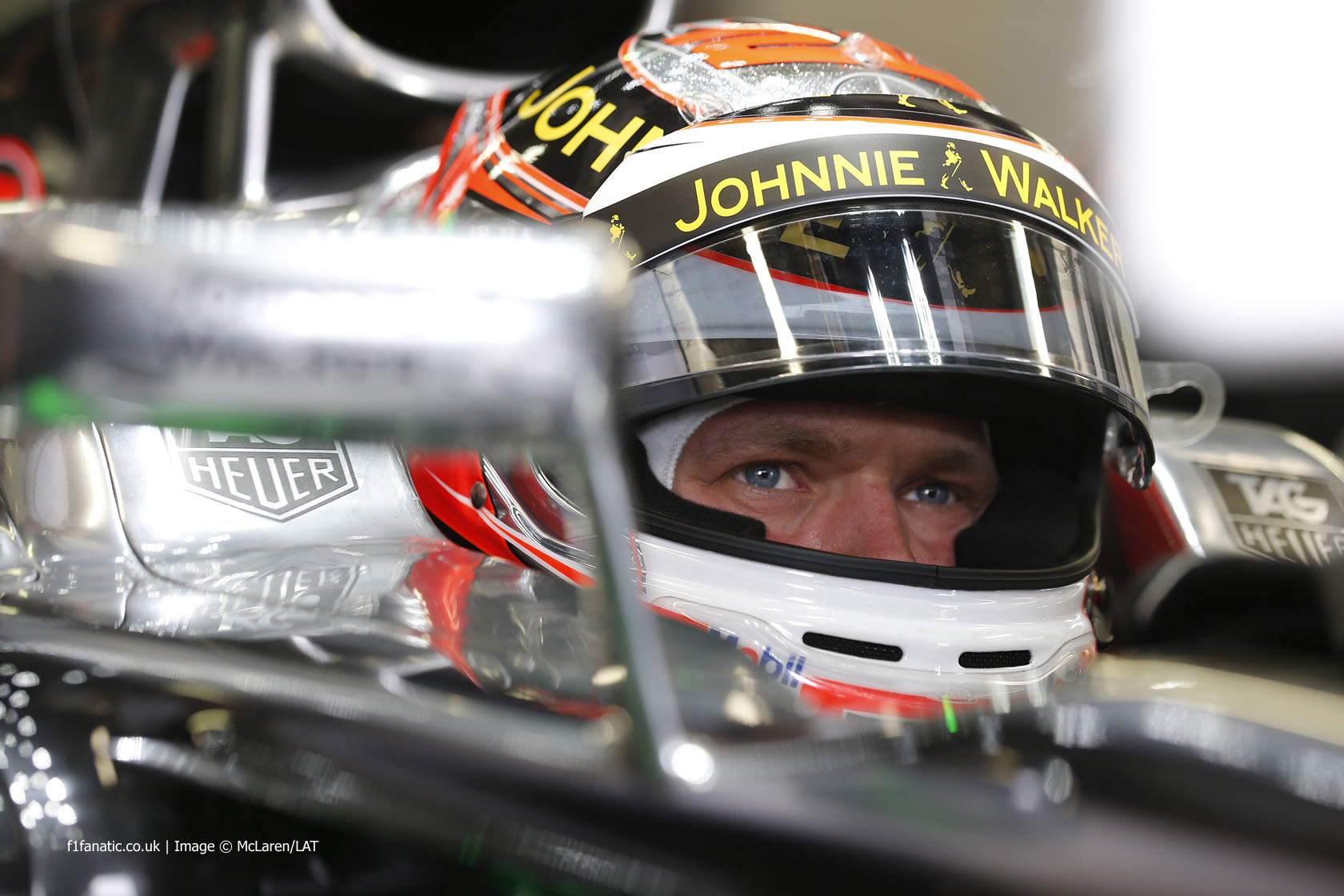 McLaren racing director Eric Boullier says Kevin Magnussen is experiencing the normal difficulties new drivers have when they step up from one-make series to Formula One.

Here are the full answers Boullier gave to a series of questions in a phone-in interview today:

Question: “Alain Prost said prior to Monaco that McLaren possibly need a new approach to be successful in F1. Is that something you either agree with, or are even working on, or did your double points finish prove you are progressing in the right direction?”

Answer: “Yes I agree with the comments of Alain. This is what I’ve been doing now since I started. And I think the double points finish of last weekend are mostly due to the track layout which is suiting our car. But it’s also rewarding as well as the hard work which we are doing here in Woking and since now a couple of races we have, let’s say seriously pushed on the development and you can see on the car. And it’s going to go through now the next races so it’s partially due to, yes, the change of direction and, let’s say, what we have been picking up in terms of performance.”

Q: “You got, first of all, a positive result in Monaco, given the run of point-less finishes you had. With upgrades coming for, first of all, Canada, and your more major upgrades for later on down the line, in Montreal do you need to see some evident progress to be satisfied or are you just looking to consolidate your position back in the points?”

A: “I think honestly it should be both. First of all we have been bringing upgrades regularly since the beginning of the season but clearly we had a strong push since Barcelona.

“In Monaco we had a lot of mechanical upgrades on the car which obviously the track layout of Canada obviously is high-speed – long straight lines, high-speed track but with no high-speed corners, a lot of chicanes and low-speed corners – so it should suit actually our car. So we should be in even better shape in Canada than we were in Monaco.” Q: “To follow up on the Prost comments, I’m interested in your assessment why the likes of Red Bull and Mercedes have been able to outmanoeuvre the likes of McLaren and Ferrari in the way that Alain suggests?

A: “You can have another question because I’m not sure I want to answer this one! It’s part of, let’s say, the job I’m doing, and I don’t obviously want to make it public.”

Q: “Talking about Kevin Magnussen, as a rookie driver coming into Formula One with such a massive regulations change, has he found it from your perspective difficult to give the right feedback to the team in terms of developing the car? Have you found it more challenging having one rookie driver and one experienced driver as opposed to having two experienced drivers?”

A: “Well that’s a good one! I don’t think it’s more challenging to have a rookie driver rather than two experienced drivers, let’s say. Because you can, I mean the key is now, especially kids like Kevin can do, let’s say, most of the job and get enough feedback to lead or to at least answer some questions from the engineering team. And obviously when you have somebody more experienced like Jenson [Button] you get more details and you can dig in more problems to find solutions.

“I think Kevin is facing the rookie syndrome which is obviously they are all coming from a single-maker series. Where they are struggling much is to understand the cars they have, the cars they are working for and trying to develop is giving them some kind of result and obviously if you don’t have the best car you can’t fight for the win. This is where they most struggle with.

“But the rest is fine, to be honest, he’s settling well, he is very consistent, the feedback is good enough to drive his engineering group around him to make the car faster. So he is doing very well for a rookie.”

Q: “At the end of June the regulations submissions need to be put forth. What are the teams likely to put forward from a cost saving perspective and is there anything else that we’re likely to hear about that might be of interest for 2015?”

A: “Well it’s a long, long subject and we have in a few days another meeting, actually, to keep discussing before the end of June, yes, where it’s easier to change for 2015 when you just have to get the majority [vote], not the unanimity.

“I think we have to be careful. There is on one side, let’s say, the more change we can do to the regulation and the more money we could potentially spend in adjusting our businesses to the new rule. We know that regularity actually and trying to keep the regulation stable over a few years is the best way to make sure we are saving money.

“At the same time there is a couple of obviously big discussions about format of the weekend, or even price of the engine, where we obviously restriction in the wind tunnel or some other question where we could potentially save more money. But once again we have to be more careful about the change we are doing to not create… by experience the more change we do in the regulations the more money we spend.

“So you have to be in some ways stable on the regulations and there is still potentially some space where we can save money. So this is where we are trying to agree for the future but I am not going into any crazy decisions because at the end we could produce the inverse of what we want to do.”